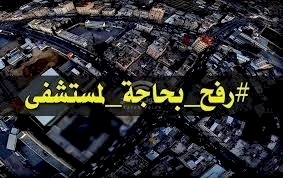 Ramallah – The Coalition for Accountability and Integrity (AMAN) called on the Ministry of Health (MoH) to state why the Palestinian government has failed to live up to its promise of constructing a hospital in the Rafah governorates. In April 2015, the former government announced a budget allocation of US$ 24 million to construct an integrated medical complex to meet the increasing needs and growing population of the Rafah governorate. So far, none of these promises have been translated into reality. The government has not disclosed any information to the public, particularly to the popular advocacy campaign of the Rafah Youth Movement.

For the second time, AMAN submitted the local population’s request to build a hospital in the Rafah governorate. AMAN reiterated citizens’ right to receive a response and briefing from government bodies on the latest developments in this regard. This is based on the need to access information on public issues from government agencies. Local communities have the right to hold the government accountable for integral, transparent and equitable public service provision to all across Palestinian governorates. In light of growing demands, citizens in Rafah have developed a movement of community accountability to explore reasons behind government bodies’ failure to deliver on their promises and fulfil public priorities.

The Rafah Youth Movement has substantiated its demand for a medical complex, which should meet public needs in the Rafah governorate, home of 240,000 people. The Abu Yousef al-Najjar Hospital is the only healthcare facility available in Rafah. Medical services provided by this modest governmental hospital do not match the increasing number and needs of the Rafah population. Also, the European Hospital can easily be isolated by the Israeli occupying forces in times of military offensives. As was the case several times, denial of access to this hospital caused heavy loss of life and severe complications of injuries. This has directly impacted citizens’ lives and will probably result in high death toll during any potential wars.