AMAN discusses the environment of integrity, transparency and accountability within the performance of the General Directorate of Petroleum (Gaza) 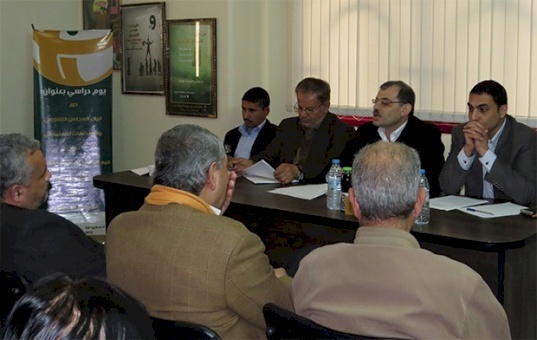 Dr. AtefAdwan, head of the Economic Committee in the Legislative Council, lauded the recommendations presented in a report prepared by the Coalition for Accountability and Integrity – AMAN. The report focused on the activities of the Advocacy and Legal Advice Center (ALAC) and its examination of the environment of integrity, transparency and accountability in the performance of the General Directorate of Petroleum. The GDoP represents the fuel sector, which is increasingly becoming on top of the Palestinian citizen’s priorities. The hearing was held at AMAN’s Gaza office where report findings were illustrated by researcher Dr. SaifOdeh. Findings indicate a weakness in the values of integrity and the likely presence of the “Conflicts of Interest” phenomenon among workers. This is due to the lack of a mechanism or a code of conduct governing the actions of the Directorate’s employees. Conversely, the report indicated a lack of commitment - on the General Directorate of Petroleum’s part - to the principles of transparency. In Particular: the publication of agreements and reports, disclosure of fuel supply contracts, pricing policy, as well as the lack an internet presence “a General Directorate of Petroleum webpage.”

The hearing was attended by a number of stakeholders and representatives of Civil Society Organizations and private sector companies, as well as the media.  They were very keen to hear the opinions of Dr. AtefAdwan, Head of the Economic Committee and member of the Legislative Council, and Dr. Yahya Al Attar, representative of the General Directorate of Petroleum.

With regard to the fuel price discrepancies, Dr. Adwan noted that the pricing policy is in fact integrated between Ramallah and Gaza, since the General Directorate of Petroleum in Gaza is a branch of the Ramallah’s General Directorate of Petroleum. The Gaza office implements all policies and procedures that are issued by the main branch in Ramallah with regard to fuel pricing. However, due to the political divide, it became subject to violating laws.

Dr. Adwan ended by suggesting that AMAN must take a greater role to support and collaborate with General Directorates of Control, in an effort to improve the transparency, integrity and accountability environment within all Palestinian sectors.

Dr. Attar, General Directorate of Petroleum representative, commented on the technical aspect of the report. He pointed out that, when it comes to issuing petrol station licenses, the General Directorate of Petroleum is unable to extend that service - in effect causing a major problem - as it is not vested to perform such services or make such decisions.

Mr. Mahmoud Shawa, head of the Association of Owners of Oil & Gas Companies, said: "The General Directorate of Petroleum has been a monopoly since its inception. It operates a number of gas stations within the West and sets fuel prices at different values in the West Bank and Gaza, granting the West Bank a lower price tag. The Directorate’s contract signed with “Bazz” under the supervision of the “National Caretaker Government” has not included the private sector, nor has it considered its needs. The Directorate’s Gaza office is majorly affected by those contracts and decisions, however it bears no impact on them in anyway. There can be no doubt that all contracts signed by the Directorate are marred by Conflicts Of Interest and other forms of corruption, especially contracts signed prior to 2003.” He added that, a new fuel supply contract will be signed; he requested that the private sector should be included in and privy to the terms of this agreement.


Mr. Baker Al Turkmany, AMAN’s legal adviser in Gaza, contemplated the report’s findings and recommendations, explaining how the findings indicate a weakness in the State Audit & Administrative Control Bureau and the Legislative Council’s accountability role. He recommended that both of bodies activate their supervisory role over the performance of the General Directorate of Petroleum, seeing that, its monopolization of the fuel sector is a clear violation of the Constitution. He further added that, the lack of a legal framework that regulates the Directorate’s functions, outlines its specializations and operational procedures, and reflects its specificity, has weakened the accountability role of competent control bodies over its operations.  This has also been fueled by the Governments indecisiveness regarding its desire - or lack thereof – to operate the Directorate according to a decentralized management style, or a centralized management style, which in essence will erase its corporate identity by giving it many titles. At times it was deemed a Directorate and at others it was considered an administration (its official public named). There is a major disparity between the two titles in terms of Public Institutions management.

The monopolistic practices, awarded to the Directorate, were a major cause for the emergence of a non-transparent and unfair environment, which lead to several cases of corruption and illegal earning during the Directorate’s early founding years. These facts are well documented in many reports that have been published in this regard. Moreover, these practices were severely criticized by stakeholders, especially the Association of Owners of Gas & Oil companies.

In a statement by a representative of the State Audit & Administrative Control Bureau, he clarified that the Bureau is currently conducting supervisory visits with the General Directorate of Petroleum. These visits were conducted immediately following the collection of the report’s data and were based on its recommendations.