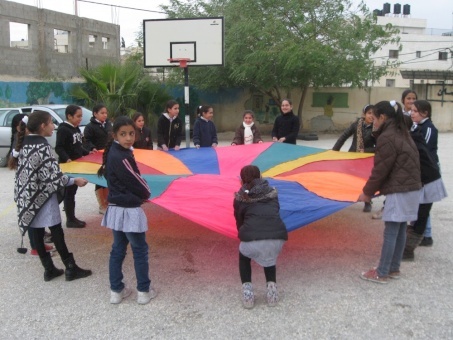 The Center for Innovative and Talented Youth and Children, in cooperation of Beit Liqya Youth club and Abu ObaidaAmer Ben JarahSchool,  implemented a Children’s Entertainment Activityat Beit leqyawith the valuedcooperation oftheCoalition for Integrity and Accountability (AMAN).The activity took place on Thursday December 26th  on the occasion of the International Anti-corruption Day.

The entertainment activity  started by drawing a mural supervised by painter Wafa’ Sarhan . The girls were distributed in groups and each group was supervised by oneof the six instructors, who implemented group activitiesthat included: face painting, coloring specially designed anti corruption sketches,balloon games(integrityballoonsvs. corruption balloons) . Other games included capturing the corruptedas well as theintegrity is our way to Jerusalem which is an interesting game designed by TheCenter for the Talented.  Activities including dramaand story tellingin addition to drawing were also organized. Explanations of the impact of Wasta and favoritism on the society were also presented to the children.

The activities continued for two and a half hours and after that the participating children went back to the school’s hall where the children enjoyed clown MohannadShareef(Uncle Mohannad) one hour and half show, all of the school girls (680) attended the clown’sperformance during which 15 gifts were distributed by the Center for Innovative and Talented Youth and Children. The gifts consisted of the integrity is our way to Jerusalem game, this matter added more fun and joy to the kidswho participated in the entertainment activity day.

In her speech, the deputy director of the school referred to the role of AMAN Coalition and the role of The Center for Innovative and Talented Youth and Children in drawing smiles on the faces of girls who lack such programs. She also thanked the teachers and the instructors as well as the parents who participated in this day