Under the theme Our People Continues to Set a Good Example: AMAN celebrates 13th National Integrity Festival on the occasion of the International Anti-Corruption Day 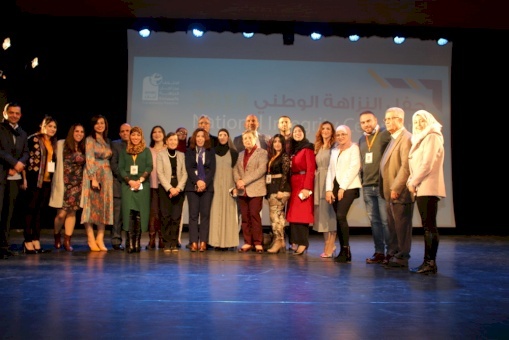 Ramallah/ Gaza – The Coalition for Accountability and Integrity (AMAN) organised its 13th National Integrity Festival in the context of celebrating the International Anti-Corruption Day, which falls on 9 December of every year. Themed around Our People Continues to Set a Good Example, the festival was held simultaneously in Ramallah and Gaza. To honour them, the champions of integrity for 2018 did not abandon their values. They lent a favourable hand to and actively engaged in fighting corruption and exposing corrupt individuals. Champions of integrity developed investigative reports that laid bare instances of corruption, produced focused research on the reality and fight against corruption, implemented initiatives to promote integrity in the work of institutions, and ensured the provision of high quality services with justice and equity.

Calls for a comprehensive national cross-cutting strategy against corruption

In his opening remarks, Mr. Abed Al Qader Al Husseni, Chairman AMAN’s Board of Directors, laid out the Coalition’s vision. In spite of current challenges, AMAN insisted to organise a unified festival in both the occupied West Bank and Gaza Strip. Al Husseini reiterated the consensus reflected in the Jerusalem Anti-Corruption Declaration. Relevant political parties, parliamentary blocs, civil society organisations, and the Independent Commission for Human Rights called for developing and approving a comprehensive national cross-cutting strategy against corruption. This will be part of an integrated system and based on a collaborative and mandatory approach. In addition to a plan of action, visible agencies and monitoring mechanisms will be in place. As a national priority, the strategy will be one step further to freedom from the occupation. It will not be the exclusive preserve of the Palestinian Anti-Corruption Commission (PACC). Although a speech was reserved for it, the PACC boycotted the 13th National Integrity Festival.

Al Husseini called on the Palestinian government to comply with the openness policy it has claimed to embrace. In view of the recent increase in reprisals and counterclaims against whistleblowers and witnesses, Al Husseini reiterated his call for approving a regulation to ensure protection of these persons.

The 13th National Integrity Festival had the special participation of Ms. Delia Ferreira. Chair of Transparency International. In her statement, Ferreira stressed the need for a community consensus to support and build on past achievements and efforts. Anti-corruption actors need not suffice with enacted laws, ratified conventions, or well-established anti-corruption institutions. All these are in need of both individual and community consensus on the best values and practices of good governance. Hopes should be pinned on every individual, who refuses to engage in corruption practices.

To win the Integrity Award, AMAN received nine applications for from the public sector, 17 investigative reports, 15 research papers, seven applications from civil society organisations, and 10 from radio and TV stations. In 2018, AMAN’s Technical Committee of the Integrity Award also applied the Transparency Index to local government units. According to the ranking of the Municipality Development and Lending Fund, 80 local government units were rated B, B+, and B++.
Younis explained the evaluation process used by AMAN’s technical committees for each integrity award. Based on the Jury’s recommendations, committee members held meetings to review and develop the criteria of each award. Members were also informed by designated templates, manuals, announcement, and timeframe of every award. Each committee reviewed and examined received applications, assessing whether relevant criteria and requirements were fulfilled. Meantime, field visits were made to applicants. Correspondence was also exchanged with certain government bodies to double check the accuracy of information. Each committee developed a report on work progress throughout the year. The report covered the nomination of candidates for the award and introduction of nominees to the Jury. Members of the Jury included legal persons and community figures with longstanding credibility, professionalism, and integrity. The Jury holds an annual meeting to examine and review committee reports and decides to present the award on the entitled persons.

Integrity Award for the Public Sector

Mr. Mahmoud Alawneh won the Integrity Award for public sector staff, who reported and refused to engage in corruption practices. Alawneh exposed data forgery, manipulation and misrepresentation, which resulted in the waste of funds from the Public Treasury. He proved that a civil servant was complicit with a taxpayer’s accountant. The case was referred to the PACC, and then to the Corruption Crimes Court for further legal proceedings.
Ms. Sahar Hamdan received the Integrity Award for the best initiative of the public sector staff. Hamdan took the initiative to develop and digitise entrance and comprehensive examinations of driver refresher courses. Hamdan’s initiative promotes the integrity and transparency of examinations and tests and wards off practices of favouritism and nepotism. In addition to avoiding leakage of questions, the process ensures public satisfaction with fair, instantaneous and high quality results.

Integrity Award for the Media Sector

Mahmoud Haniyyah, a journalist from Gaza, won the Integrity Award for the best investigative report. From Ramallah, journalist Firas al-Tawil also received the same award. In his investigative report, Haniyyah unveiled that Naval Police officers were complicit with fishermen, who were allowed to fish in restricted areas with serious seawater contamination, putting citizens’ lives at heightened risk. In return, these fishers had two thirds of the fish catch from others. Al-Tawil investigated large-scale corruption in vehicle custom dutiess. Illegal exceptions were granted to unentitled persons. In many extreme cases, public funds were effectively wasted by presidential exemptions issued to the benefit of senior officials.

Researchers Adham Jaradah and Basem Abu Jray won the Integrity Award for the best focused research on the fight against corruptionh. Jaradah highlighted the lack of a law to protect intellectual property in Palestine. Absent regulation results in the theft of research papers and studies at universities and adversely impacts quality education. Not to mention undermining scientific research at higher education institutions, plagiarism disrupts educational goals, which are grounded in the philosophy of comprehensive development. As such, scientific research can hardly contribute to resolving community issues, including pervasive corruption. In his research paper, Abu Jray addressed the lack of governance principles and the weak oversight role of trade unions, leading to the abuse of the rights of workers hired by cleaning companies at government hospitals across the Gaza Strip. To ensure consistent enforcement of the Labour Law, the Ministry of Labour does not play an adequate oversight and supervision role either. Although the Labour Law provides for minimum labour rights, work conditions do not observe occupational safety standards. Additionally, workers are not entitled to leaves or severance pays.

The Jury honoured three shows, which spotlighted the role of investigative journalism in detecting serious corruption crimes, holding officials accountable for their decisions, and advocating for issues of the marginalised and the poor. These were In a Loud Voice, anchored by Yousef Abu Hussein on Al-Aqsa Radio (Gaza); Between the Citizen and the Official, presented by Mohammed Quneitah on Al-Quds Voice Radio (Gaza); and We Should Talk by Alaa’ Karajah on Alfalstiniah TV.

The Jury also honoured civil society organisations which have left an indelible mark on promoting integrity, transparency and fight against corruption. Responsive to good governance indicators, these organisations have incorporated integrity and anti-corruption systems within their strategies, actions plans of action, and activities. In this context, the Social Developmental Forum (Gaza) and Teacher Creativity Centre (Ramallah) had the highest scores based on the criteria of AMAN’s Technical Committee. Indicators were also developed on the grounds of good governance principles and criteria within civil society organisations.

AMAN’s Jury honoured the Khuza’a and Biddu municipalities for achieving the highest markings on the Transparency Index, which AMAN applied to 80 local government units in 2018. Having been developed by Transparency International, the index was adapted and applied by AMAN to the Palestinian context. The award encourages both municipalities to comply with best practices, develop governance systems, promote transparency in public administration and public service provision, and ensure disclosure and openness to the public.

In addition, the Jury honoured public service agencies, which adopted initiatives to promote integrity and transparency in public service provision. The Ministry of Social Development was awarded for the initiative it has taken to prepare the Citizens Budget, allowing public access to the distribution of expenditures and revenues. The Jury also awarded the Ministry of Labour’s Public Supplies Department for the efforts it has made to maintain public funds. Thanks to its compliance with transparency principles in the implementation of public procurement policies, the Public Supplies Department provides effective and efficient management of the public procurement process.
In conclusion of the 13th National Integrity Festival, participants commended the bravery of whistleblowers. The festival ended with the hope that next year would see new champions, who hold high the banner of integrity in the public administration sector.

An audience of more than 800 participants took part in AMAN’s 13th National Integrity Festival from both the West Bank and the Gaza Strip. These included representatives of government bodies, civil society organisations, AMAN’s friends engaged in the anti-corruption effort, and donors. The festival also brought together ambassadors, consuls, university students, researchers, media representatives, and academics. Despite the fact that it had confirmed its attendance, the PACC did not participate in the festival.