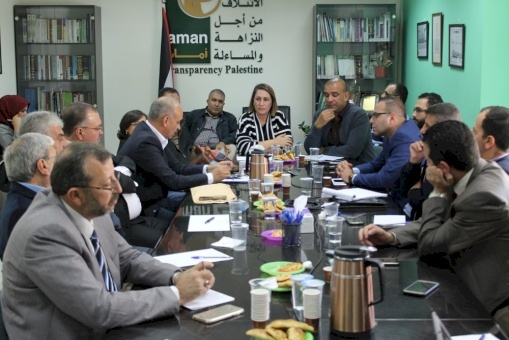 According to the Basic Law, the PDIC Board of Director should obtain the Council of Ministers’ approval of all PDIC regulations. These adjustments are tailored to enhance the capacity of the PDIC as an oversight body that monitors a vital sector, insures and promotes savings, and affects interests of all Palestinian citizens.

Developed by Researcher Raedah Qandeel for AMAN, the report includes a definition of the PDIC and reviews the circumstances surrounding its establishment. Pursuant to the relevant law by decree, the Corporation serves as a preventive measure that contributes to the State’s fiscal stability. It works towards protecting depositors’ funds in member banks, promoting savings, and strengthening confidence in the Palestinian banking system.

Diagnosing the PDIC structure and practices

According to AMAN’s report, the PDIC enjoys a juridical personality as a legally eligible entity. The Corporation operates in line with independent administrative and financial regulations, whereby its staff members are not subject to the civil service system. Contrary to applicable procedures at other public institutions, these regulations have only been approved by the PDIC Board of Directors, rather than by the President or Council of Ministers. Furthermore, the PDIC regulations have not been published in the Palestinian Official Gazette. According to Article 70 of the Basic Law, however, the Council of Ministers has an absolute power to issue regulations and take necessary actions to implement laws. The report also shows that membership on the PDIC is binding on all commercial and Islamic banks licensed by the Palestine Monetary Authority. A total of 15 banks are subject to the law by decree, including seven local and eight foreign banks.

AMAN’s report explains that, contrary to the Basic Law, the PDIC functions as a constitutional institution. A supervisory body, which should monitor the PDIC Board of Directors, is not in place. Debilitating accountability mechanisms, the Board enjoys broad powers that parallel those of the Council of Ministers, particularly in relation to the issuance of regulations and instructions. Reporting relationships of the PDIC are also in contradiction with Article69(9) of the Basic Law.

Additionally, AMAN’s report indicates that the concepts of a deposit insurance institution and deposit system are confused, giving rise to some observations about the PDIC budget and financial resources of the deposit system. In terms of how effective and efficient the PDIC is to protect and compensate depositors, the law by decree does not set a time limit for compensation if a bank is in default. It does not regulate judicial proceedings against the Corporation in case it fails to perform its functions.

According to AMAN’s report, the PDIC has proved to be effective as it has been capable of making all member banks comply with its instructions. In addition to maintaining a large number of depositors, the Corporation has increased its reserve, established investment funds, achieved reasonable returns, and raised returns over the years of its operations. However, the PDIC does not have a strategic plan, which sets out specific timeframes to achieve the Corporation’s goals. AMAN’s report stresses the need to adopt such a plan. The Ministry of Finance should also be obliged to pay its contribution as prescribed by the law. The Ministry has not paid an outstanding amount of US$ 20 million. Still, the PDIC has not taken any action in this regard.

Recommendations to promote integrity and transparency in the PDIC operations

The law by decree explicitly highlights transparent operations of the PDIC. It provides that the PDIC Board of Directors approve the policy of disclosure and transparency and publish statements and reports on the Corporation’s tasks and achievements. Given that this policy has not been approved by the PDIC, transparency is undermined. Unlike similar public institutions, the PDIC has not made publicly available documents that regulate its operations, including budget, administrative and financial regulation, and staff salary scale. Board members’ honorariums are not stated despite the fact that they were published in a decision from the President of the State. These honorariums have not been published in the Palestinian Official Gazette.

AMAN’s report recommends that the PDIC External Audit Report be published in Arabic, not only in English as is currently the case. After two investment funds were established, the investment policy approved by the PDIC Board of Directors should also be made publicly available. To improve transparency and governance, the PDIC website should be activated so as to provide all relevant documents. Recommendations also stress the need to finalise integrity criteria at the Corporation, including an honour charter or a code of professional conduct for Board members. These be informed by the applicable governance document. Special instructions on whistleblowing should be issued to the PDIC staff. Financial and financial reports should draw a distinction between financial resources of the deposit system and the PDIC budget.

The Executive Director of AMAN commended cooperation by the PDIC in developing this report and providing the researcher with all needed materials and information. However, the PDIC Executive Management and Board of Directors refused to participate in the discussion session and make clear the Corporation’s position towards AMAN’s report. Over the past years, AMAN has published dozens of diagnostic reports on public institutions, placing a special focus on accountability, integrity and transparency indicators. These reports present clearly defined recommendations to the institutions concerned with a view to improving performance, providing immunity against corruption, and ensuring optimal efficiency.

The discussion session brought together a large audience, including representatives of public institutions, civil society organisations, media outlets, banks, State Audit and Administrative Control Bureau, and experts. All participants commended AMAN’s objective report, including findings and recommendations. The latter will be submitted to relevant authorities in the near future.