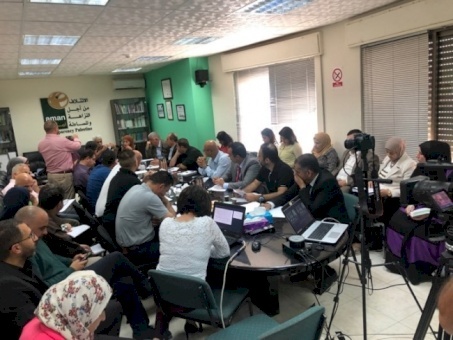 Ramallah – The Civil Society Team for Enhancing Public Budget Transparency held a session to discuss a paper it had prepared on development expenditures earmarked by the public budget to three ministries in the social sector, namely, the Ministry of Health (MoH), Ministry of Education (MoE), and Minister of Social Development (MoSD). The paper investigates development expenses, development dimensions, link to external financing, whims of the donor community, and impact of declining foreign aid on development expenditure. The Team called on the government to pay more attention to, prioritise, and increase government spending on development sectors. For the benefit of citizens, this ensures current and future improvement and localisation of government service provision, thus obviating the need for paying huge sums to purchase services from abroad. The Team also stressed the need to secure development expenses from the Palestinian Public Treasury and to reduce reliance on foreign support. Accordingly, the development process would no longer be dependent on donor vagaries.

Self-reliance in financing development expenditure is a priority

The Coalition for Accountability and Integrity (AMAN) serves as the secretariat of the Civil Society Team for Enhancing Public Budget Transparency. Ms. Hama Zeidan, Manager of AMAN’s Advocacy and Social Accountability Unit, highlighted that a major portion of development expenses were financed by, and subject to the directions of, donor countries. Zeidan stressed the need for self-reliance in local revenues of the Public Treasury to gradually finance development expenditure. Development financing should be scaled up to make a development breakthrough.

Instead of rising, development expenses have dropped from 40 to 25 percent since 2007

The paper highlights a set of substantial differences in data, development budgeting mechanisms, and inadequate budget ceilings. Current expenses account for the bulk of budget allocations. The paper also provides a review of the current context of development expenses from the perspective of the Palestinian public budget. According to the distribution of budget line items, development expenses are not contingent, no matter how necessary they are. Financing mainly relies on foreign support, a major portion of which is designated for development expenditure. During the sessions, discussants emphasised that foreign support has declined steeply since 2007, negatively impacting the development expenditure account. This gap has not be replenished from local resources or from outside the tax revenue fund. Tax revenues did not cover the financing gap in development expenditure. According to Researcher Mseif, short finance is attributed to dwindling foreign grants and aid, clearly reflecting on the social sector. For example, the health sector has seen a financing gap, which has affected both development and current expenses. Many educational programmes and development projects of the MoE have also be suspended.

Participants also addressed the recent financial crisis of the Palestinian Authority (PA). The crisis has been compounded by a significant decrease in foreign aid over the past few years. In particular, US support came to a complete halt in early 2018. This decline has largely affected all projects and expenses of the social sector, especially in relation to humanitarian aspects.

A structural imbalance has resulted in a chronic deficit

The paper highlights a real problem associated with development ceilings in terms of value and commitment. These ceilings are essentially mediocre and inadequate to generate development and growth. Appropriations are not spent in full for designated purposes, resulting a financing gap and increasing arrears on the social sector. In addition to suspending future budget planning, this situation has inhibited the allocation of additional amounts to development expenditure.

According to the paper, development expenditure earmarked to the MoE were nil in 2015. Compared to less than 2 percent in 2016, development expenditure increased to 8 percent of the MoE total budget (92 percent of which covered current expenses). Worth noting is that current expenses of the Ministry are constantly on the rise. MoE spokesman recommended that the Ministry of Finance (MoF) secure executable financial ceilings for development projects over specific and clearly defined periods. In 2018, outstanding invoices in the amount of NIS 55 million were payable by the MoF to the MoE. In the health sector, current expenses increased by NIS 51 million between 2015 and 2018. This increase is incommensurate with the rising demand on medical services, nor does it match the growing number of the population. Development expenditure in the health sector is almost entirely absent. For five years, the MoH budget has seen a fixed development expenditure, standing at 5 percent – an insignificant proportion for an extremely important sector. This is all the more crucial after the recent PA decision on suspending patient transfers to Israeli hospitals and localising treatment at Palestinian health facilities.

The MoSD current expenses dropped by NIS 10 million between 2015 and 2018, negatively reflecting on poor and vulnerable households in the midst of a deteriorating economic situation. While estimations showed that approximately 200,000 households are in need, the MoSD provided monthly assistance to almost 112,000 households in 2018. Earlier, in 2014, the Ministry used to distribute cash subsidies to as many as 125,000 households.