Community organisations gather in front of the Judicial Council,Demanding the deterrence of the perpetrators of corruption crimes in food and medicine 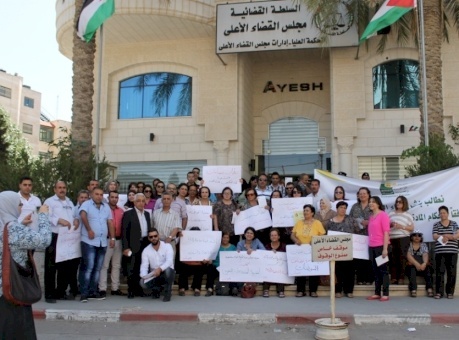 AMAN Association and its community partners organized a sit-in in front of the Supreme Judicial Council on Wednesday. Their aim was to raise the voice of the Palestinian citizen who demands combating the phenomenon of corruption crimes in food and medicine.

AMAN Association called for this gathering to shed the light on the corrupted persons who commit these crimes taking advantage of the weak Palestinian legislations related to combating this phenomenon, in addition to the contradictions and gaps stigmatizing them. These corrupt people also take advantage of the flounder in institutions under the absence of a unified organizational body that supervises the efforts of all related parties that combat corruption. Finally, those corrupts are reassured that if captured the penalties are ridiculous because no preventive punitive policies were ever adopted in their regard.

Al Shu’aibi: it is time to take serious measures

Dr. Azam Al Shu’aibi, the General Commissioner for Combating Corruption, said that this demonstration takes place today on the occasion of the Global Citizen Day as crimes of corruption in food and medicine carry on representing a serious danger on the Palestinian society. He added that this action aims to mobilize the Palestinian public opinion to limit this phenomenon and impose severe punishments on its perpetrators. Al Shu’aibi declared it is time the State’s competent institutions undertake serious measures to uproot this phenomenon by imposing severe penalties on anyone whose conscience allows him to manipulate the citizen’s sustenance and medication.

Participating in the demonstration was the vice-chairman of the Supreme Judicial Council, judge Sami Sarsour, who said that the Council totally agrees with AMAN that this phenomenon became a real concern and must be fought against with different means, such as activating the rule of law. Mr. Sarsour added that the Council is willing to cooperate to achieve this goal which is stopping criminals of corruption from escaping punishment while affirming that the Council believes that the adoption of severe preventive policies can highly contribute in the prevention of this crime.

The Supreme Judicial Council: we are with announcing the names of the convicts
A delegation representing this gathering that comprised Dr. Azmi Al Shu’aibi, delivered today at noon an official letter with the gathering’s requests to Counselor Ali Muhanna, Chairman of the Supreme Judicial Council, who emphasized on the importance of this issue adding that the judiciary’s position is that public hearings and respect of a just trial must not prevent society from its right to know who is causing damage to the lives of citizens. He added that most of the people affected by this phenomenon are the poor who tend to buy low cost products and goods due to the expiry of their validity or other reasons. Mr. Muhanna invited AMAN to organize a meeting for all concerned parties to discuss the matter and arrive to suitable solutions each according to its roles and authorities.

A re-examination of legislations is required

In this regards, AMAN distributed a statement demanding in its name and on behalf of community based associations, participants in the gathering and damaged citizens, official parties to take into consideration the following recommendations: In regards to the legislative aspect, the statement recommends to reconsider legislations concerning medication and food, eliminating contradictions in the legal texts, and considering corruption crimes in food and medication as crimes of honor and integrity and to deal with the perpetrators in this manner in what concerns giving them licenses, official permits and the right to nominate and vote, treating the gaps in the consumer’s protection law and clarifying some vague terms (expired, rotten, spoiled) and adding their definitions.

The citizen has the right to know what is happening

The statement also called for revealing information to the public opinion regarding the investigation and pursue procedures in corruption crimes of food and medication (with respect to the presumption that the accused is innocent until proven guilty) to ensure the protection of the lives and health of humans from rotten food and medication which are proven to be cheated. Also to conserve the right of the consumer to return them and demand compensation, and to enhance the concept of community punishments that allow society to punish merchants who sell cheated products, after examining their names and their partners who are involved in the crime.

In regards to the institutional aspect, the statement demanded the Council of Ministers to establish a public administration for the safety of food and medication, which should be independent as a competent body for control and supervision on food and medication in the Palestinian market. It also demanded the implementation of the decision of the Council of Ministers to form the Palestinian Council for the Protection of the Consumer and to begin its work as a coordination body unifying all efforts.

Paying a fine should not replace the sentence of imprisonment

As to the judicial aspect, the statement demanded the activation of the provision in article 32 of the Consumer’s Protection Law which states “the court should in all previous cases confiscate the rotten or dangerous or cheated materials or order their destruction on the expense of the convict, it can also order the closure of the commercial store or withdrawing the license or stopping the service provider from his work either temporarily or permanently. It also demanded adopting severe punitive policies against those convicted of corruption cases in food and medication, and the convicted merchant should not have the option of replacing the sentence of imprisonment with paying a fine, and also to accelerate the procedures of pursuing and judging the accused.
Moreover, the court orders publishing any sentence it delivers for these crimes in one or more local newspapers and on the expense of the convict”.
Finally, the statement stated that AMAN would work on inviting all official, community and private sides to participate in a meeting to discuss feasible mechanisms that can stop this phenomenon.