Palestinian local bodies take up a leading experience in integrity 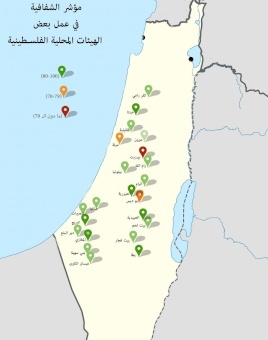 An index developed by Transparency International is proven to be applicable, with some adjustments, to the Palestinian context, said the participants in a workshop concluding a three-month period of testing and evaluating the index against 22 local Palestinian bodies.

Testing the index had two purposes. It was originally meant to evaluate the availability of information relating to local bodies and their acceptability to customers. But, it also aimed at creating a sort of competition between local bodies and encouraging them to disseminate information, in addition to coming up with relevant recommendations for the strengthening of the principles of transparency. The aspired goals are sought in cooperation with local bodies.

The workshop brought together representatives from the targeted local bodies and other stakeholders, including the Ministry of Local Governance (MoLG), State Audit and Administrative Control Bureau (SAACB), Federation of Local Bodies, Municipality Loaning and Development Fund (MLDF) and other private and international institutions.

In his opening remarks, Aman’s anti-corruption commissioner, Dr. Azmi Al-Sha’ebi thanked all the targeted local bodies for their cooperation.

“[The exercise reflected] a political will on the part of those in charge to disseminate and make available information to all customers”, Al-Sha’ebi remarked stressing that Palestine’s participation in the development of the index is “a source of pride for all local bodies.”

“Palestine has been a key player in developing an international transparency evaluation index in respect of the performance of local bodies.”
The researcher, Ra’eda Qandeel, made a presentation on the key findings. She summarised the main points that reflect positive trends and genuine competition among the participating bodies.
“Those trends, however, need yet to be translated into tangible reality”, she remarked setting the blame for under-performance on a number of obstacles.

“Our evaluation of the information online reflects inconsistency and lack of methodology in disclosing information.”
Welcoming the findings of the exercise, the participants said the index is applicable to the local context after some adjustments are made. It appeared that some local bodies missed the information required for testing, such as merchandise contracts. Another note was that the weights on the index’s scale should be changed as local realities differ from one country to another.

They also noticed that some indicators are too advanced to be applied in a country like Palestine. Those include, for example, a plan for combating corruption in local bodies, which the government has not yet developed. Eventually, testing this index should be postponed until an overarching plan is developed for combatting corruption or at least replaced by measuring the integrity strengthening plans in local bodies.

There was a consensus on the need to make several amendments if the index is to be applied in the foreseen future.

The exercise covered local bodies in Gaza, but their representatives were unable to attend the workshop deterred by the recent belligerent acts against the strip.