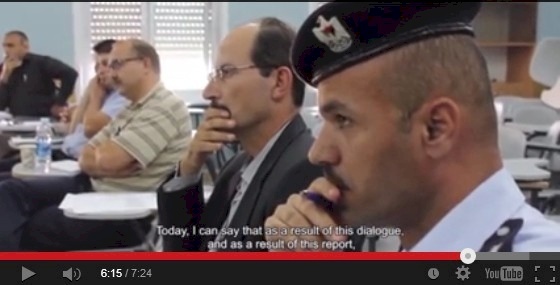 In this short film, we take a look at how AMAN (the Coalition for Accountability and Integrity, our TI chapter in Palestine) and the Palestinian Ministry of Interior worked with us to develop an anti-corruption forum and take action against corruption in the security sector.

When the Government Defence Anti-Corruption Index (GI) was initially launched, it was not well received in Ramallah. The Index—which analysed levels of corruption risk in defence and security forces in 82 countries around the world—provided evidence that Palestine’s security institutions were vulnerable to corruption at multiple levels.

But a roundtable bringing together AMAN and the Ministry of Interior sparked engagement between the MOI and civil society on anti-corruption, and over the last year joint work on these issues has grown.

This case is an interesting one for others to learn from because of the challenges posed by continuing political unrest, the Israeli occupation, and the absence of an effective and objective body monitoring the performance of the security sector.

Last October, when TI-DSP’s team visited Ramallah, the Minister made an important statement: “our understanding of security is to serve our community.” He recognized that NGOs have an essential role in overseeing the sector, particularly in the absence of a Legislative Council, and confirmed that there will be internal reforms. A new platform of Civil Society Organisations (CSOs) has been instituted to oversee and advocate for anti-corruption, and experts from AMAN will provide training to the security forces. These steps are essential in a country that lacked oversight bodies and where there was no evidence of training in corruption issues for commanders.