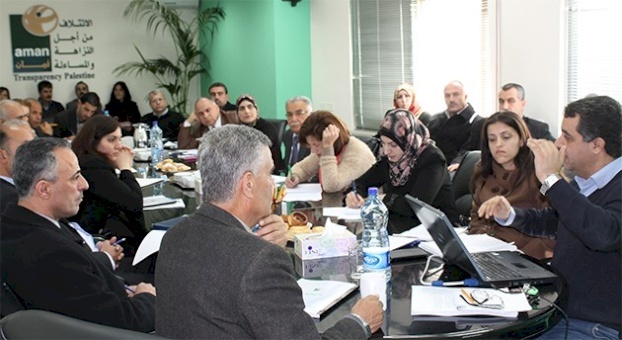 On Thursday, 27/02/2014, AMAN Coalition held two individual workshops both in the West Bank and Gaza, to discuss the draft study titled: "The 2013 National System of Integrity," in the attendance of representatives from various Palestinian sectors. The study aimed to examine the extent to which the principles of transparency, accountability, and the values of integrity are applied within key Palestinian institutions, among other elements such as the government, resources etc. In an effort to identify the strengths and weaknesses found in each of these aspects. The workshop aimed to involve the largest possible number of stakeholders, so as to review the information and findings and rectify any inaccuracies or discrepancies that may have occurred.  Moreover, it aimed to suggest practical recommendations that are designed to aid reform, expand the horizontal accountability base, and promote Anti-Corruption among all societal segments. This will positively impact these institutions, not only by filling the gaps that may increase potential corruption within them, including the waste of public money; rather, it will also increase citizens’ trust in these institutions.

The workshops were attended by Public sector representatives from various Ministries including: the Ministries of Justice, Labor, Transportation and Communication, Culture, Foreign Affairs, Information, Planning and Administrative Development, Women's Affairs, Interior, and the Ministry of Youth and Sports. It was also attended by independent public institutions representatives to include: The State Audit & Administrative Control Bureau, the Anti-Corruption Commission, the Energy Authority, and the Environment Quality Authority. This was in addition to, civil society organizations, the private sector, the media, among other attendees.

In his opening statement, Dr. Azmi Al Shuaibi shed a light on Integrity Systems and the significant role they lead, by immunizing society against corruption. With regard to the study under discussion, Dr. Shuaibi explained the progress that took place on the study’s methodology and the indicators, which were applied at institutions in the West Bank and Gaza. Noting that, AMAN coalition was first to conduct the 2009 National Integrity System Study; the latest study comes as an update to the previous, as well as an examination to the degree of progress or decline which took place since then.

The two researchers, who conducted the study both in the West Bank and Gaza, gave the workshop participants an overview of the study’s methodology and presented them with the study findings prior to commencing the discussion. They went on to explain that the Israeli occupation and the Palestinian political divide, form the most prominent obstacles that hinder any effort to build a Palestinian Integrity System. They attributed this situation to the absence of the Legislative Council’s supervisory role. Consensus was reached among the participants, regarding their ability - as a group - to overcome administrative gaps which could be used to facilitate any act of corruption. This becomes true, when operating according to a unified system and within the bounds of a political administration. Seeing as, the study recommendations highlight all current weaknesses as well as the parties responsible for remedying them. Moreover, AMAN coalition ventures to implement certain activities which will develop mechanisms and suggestion for improving the stakeholders’ situation during the current year.

The study was further enriched by the attendees’ discussions and notes, which shall be seriously considered by AMAN. They were unanimously thrilled by the efforts put forth by AMAN to conduct such studies. And have stressed the importance of holding such workshops to discuss study content, which provide an accurate information reference and present a true reflection of the requirements for building a National System of Integrity in Palestine.