In an open hearing at AMAN: The oversight relationship between SAACB and Judicial Authority is compromised by an absent legislature and conflict of powers 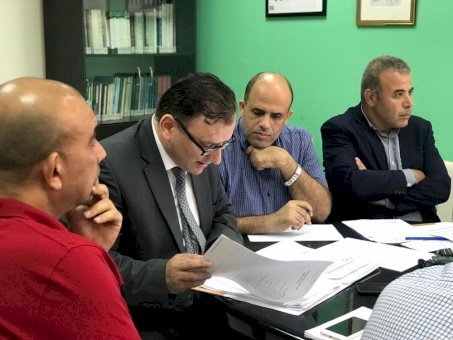 Ramallah – Between high and low tides, external accountability and oversight of the Judicial Authority usually gives rise to serious controversy. Some disapprove of judicial oversight, allegedly because it undermines the principle of judicial independence and impermissible interference with judicial functions. Others are in favour of judicial oversight on the grounds that it strengthens serious control and accountability of judicial activity. Without prejudice to judicial independence, oversight is endorsed when it is limited to financial and administrative control, excluding judicial functions.

The Coalition for Accountability and Integrity (AMAN) held an open hearing to discuss the circumstances of the withdrawal of the State Audit and Administrative Control Bureau (SAACB) from oversight of the Judicial Authority. AMAN sought to access first-hand information from official sources, come up with a consensus formula, and present clarifications to representatives of relevant institutions and citizens. The hearing brought together representatives of the Palestinian Anti-Corruption Commission (PACC), Ministry of Justice (MoJ), lawyers, academicians, former judges, partner organisations in the Civic Coalition for Judicial Reform and Protection, and journalists. Discussants agreed that the overall Palestinian context, including official and civil society organisations, call for judicial reform and protection by strengthening oversight of, and accountability for, financial and administrative functions, ensuring compliance, and maintaining performance bonds within the Judicial Authority. This should not compromise judicial independence, particularly judges’ discretionary powers in case management.

AMAN raised some questions to both representatives of the SAACB and Judicial Authority. In his illuminating presentation, His Excellency Justice As’ad al-Shunnar, Secretary General of the High Judicial Council (HJC), reflected the viewpoint of the HJC. Al-Shunnar stated that cooperation between the SAACB and HJC was not instantaneous, but age-old. The relationship is built on respect of the SAACB tasks. Over the past years, the SAACB activity had a particular focus on financial and administrative functions. Most recently, however, the SAACB has overstepped its mandate with a view to exercising control over judicial performance. For example, compromising the solemn status of the Judicial Authority, the SAACB demanded that it oversee the assignments and evaluations of judges, complaints filed against judges, discipline sessions, investigations, judicial inspection functions, and HJC meeting minutes. Al-Shunnar asserted that the Judicial Authority kept these activities secret. These are processed in accordance with the Constitution, relevant international conventions, and HJC bylaws. Against this backdrop, the case was referred to the Constitutional Court to adjudicate the limits of the powers vested in the SAACB. Al-Shunnar highlighted that the HJC would honour, and act in line with, the Constitutional Court decision, once rendered.

Mr. Jaffal Jaffal, SAACB Director General, explained that the Bureau represented the highest oversight body in Palestine. As a constitutionally independent institution, the SAACB carries out its tasks in accordance with international standards. The SAACB activities are not exclusively limited to financial and administrative control, however. In addition to performance control, the SAACB provides compliance control, ensuring that an activity conforms to relevant laws, regulations, instructions, and codes of professional conduct. Jaffal made clear that unrestricted access to information was a fundamental principle in the SAACB functions. To this avail, Jaffal cited the SAACB Law No. 15 of 2004, as amended. In particular, Article 23 of the Law limits the Bureau’s powers to financial and administrative control over the Judicial Authority. Additionally, Article 32 provides that the Judicial Authority is subject to financial and administrative control. Jaffal identified the problem that arose between both sides. To ensure compliance with applicable procedures, the SAACB requested that it oversee complaints, judicial structure table, and distribution of judges to courts. Jaffal indicated that promoting trust between citizens and the Judicial Authority came within the purview of the SAABC functions. The Bureau is not tasked to reform the judiciary.

Expressing the PACC’s position towards the issue at hand, the PACC representative stressed the need for independence of both the HJC and the SAACB. As a key requirement of transparency and fight against corruption, oversight should apply to all auditees. However, oversight may not compromise judges’ competences nor delve into the details of their internal affairs.

Participants in the open hearing coincided that the Presidential Decree promulgated by His Excellency President Mahmoud Abbas was not necessary. It endorses tasks, which are already provided for by the law. A major flaw lies in an unintegrated political system, including all three pillars, in the current Palestinian context. The SAACB is one tool of the Palestinian Legislative Council. When the latter is back in session, the SAACB can restore a more powerful position. At the same time, discussants stressed the importance of control over the Judicial Authority, ensuring a flexible and balanced separation of powers.