Transparency values and Challenges in the Security Forces Sector 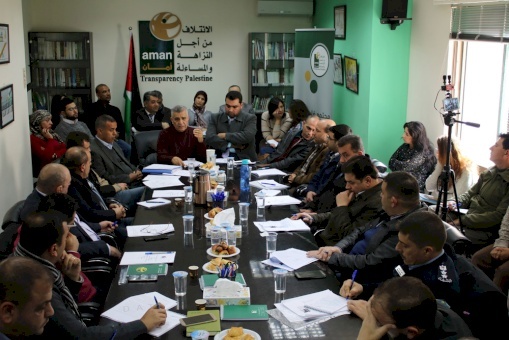 The Coalition for Accountability and Integrity AMAN held a discussion to present its draft-report on “the values of integrity, transparency and accountability in the General Directorate of Military Financial Control”. Many representatives from the General Directorate of Military Financial Control, Security Forces, State Audit and Administrative Control Bureau, Ministry of Finance and Planning, Border & Passage General Department, as well as a number of civil society organizations, researchers, academics and media attended the discussion session.

The discussion conducted several recommendations, first one of which is the adoption of a law to define the powers and reference of the military financial control, the mechanisms of appointing director general, deputy and the duration of their term in service. and the need to commit to the law of service in the security forces in terms of appointments and organizational structure of the headquarters. In addition to the preparation of a separate budget for each security force. The military financial control department shall supervise, monitor and follow-up the budget items and procedure. As for the values of integrity, transparency and accountability, the participants recommended to prepare a code of conduct for financial management, procedures manual for officers, use of public property, a system for distributing internal duties and providing a public mechanism for reporting corruption.

The report researcher, Mr. Saeed Ziad, pointed out that the Military Financial Control does not publish its legal framework unless demanded by the ministry and serves to provide services to related parties.
The Military Control is independent, headed by H.E the President Mahmoud Abbas and take on obligations from the Ministry of the Interior regarding operations and management regulations, as well as the Ministry of Finance and Planning in terms of financial and technical issues. The needs of the military control departments are selected to be integrated in the budget and approved by the MOF.

Values of Integrity, Transparency, and Accountability in the Military Financial Control

Mr. Saeed Zaid emphasized that there is a lack of Integrity, Transparency and Accountability values in the Military Financial Control (MFC). Mr Zaid focused on the absence of a written and published code of conducts. Whereas the MFC adheres to the Palestinian Cabinet according to the use of public property, and confidential ways to report corrutption and illegal acts. Moreover, Mr. Zaid pointed out the absence of a procedure manual for staff appointment and HR needs. Furthermore, the MFC has no access to information. The budget and financial statements are not published on electronic websites does not publish any information regarding the budget or financial statments. In contrast,  the Military Financial Control submits financial and administrative reports to the Director General, and other confidential reports  to the President, Prime Minister, Minister of Finance and the Minister of the Interior upon demand and not on periodic terms.

The Military Financial Control is the responsible body for all security services.

On his part, brigadier general Mr. Fadel Ziadan from the Military Financial Control pointed out that the military financial control is responsible for holding the financial status of the security forces, and the need for enhancing the values of transparency and integrity through publishing information, emphasizing the absolute cooperation with researcher Saeed in providing information needed.
Moreover, Mr.Ziadan reviewed the budget of the Military Financial Control explaining that the budget does not cover a quarter of the security forces needs, resulting in the lack of a transparent plan to distribute the budget. As for integrity values, a code of conduct manual is being prepared.
Moreover, Mr.Annes Nayfe emphasized that the Military Financial Control provides services and takes direct orders from the president.