Annual Meeting of AMAN’s General Assembly: Elects a new board of directors and opens membership for individuals Plans to target the private sector, educational institutions, and the media 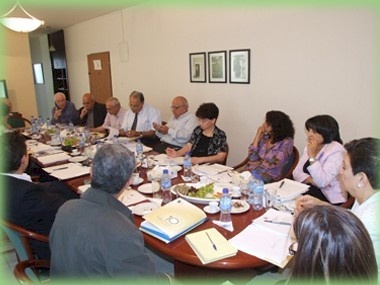 Tuesday, June 8th 2010, the General Assembly (GA) of AMAN Coalition, West Bank and Gaza) held its annual meeting in Ramallah through videoconference with Gaza. Chairperson Dr. Hanan Ashrawi opened the meeting by welcoming the participants before endorsing the agenda and verifying a quorum.

Executive Director Ms. Ghada Zughayar presented the administrative report reviewing the salient milestones for AMAN in 2009 as well as achievements at the institutional and programmatic levels based on AMAN’s Strategic plan for 2008 – 2010. The report illustrated progress achieved based on the recommendations of the organization’s assessment that was conducted by Ernest & Young in 2007 by comparing Coalition’s performance and achievements during the years 2007- 2009. The Executive Director further reviewed the main current and future challenges facing AMAN in realizing its vision and mission.

Mr. Said Abdullah - the Executive Director of Ernest and Young – auditor party for AMAN’s fiscal report for 2009, presented the audited financial report and responded to questions raised by the members.

Both reports were discussed and approved by the members, who commended and praised AMAN in their discussion. They said that AMAN’s qualitative achievements were due to the solid ground founded by AMAN through embracing professionalism, objectiveness and political neutralism in its work. Moreover, its role in mobilizing and raising the awareness of the different sectors in the Palestinian society in the area of combating corruption and in building of an integrity system has become more visible.

They also discussed challenges facing AMAN and work strategy for overcoming these challenges, in addition to discussing the issue of cooperation between the different local actors on the efforts of combating corruption.  Other areas of focus for upcoming stage were also discussed.

The members stressed the need to focus on a number of issues: the private sector, focusing on governance in Public Shareholding companies and regulating their references; working on changing the culture of favoritism and nepotism tolerance through focusing on schools and university education; and focusing on some corruption cases and discussing them in a more daring way. Other issues of discussion included capacity building for Palestinian experts in relevant fields that meet pressing needs such as internal audit for institutions; investigating corruption and economical crimes, etc. additional to lobbying and advocacy campaigns; and building the capacity of the Anti -Corruption Commission to serve as the main institution for receiving corruption cases, investigating and referring them to the judiciary.

Furthermore, targeting and mobilizing the Palestinian media, as a tool for combating corruption, by working to build its capacity in mobilizing anti corruption public opinion was of great importance. The General Assembly further commended the cooperation of government organizations and ministries with AMAN.

Financially, The GA members recommended searching for unconditional resources to sustain the organization’s vitality. They commended the support provided for AMAN’s core program by the governments of Norway and Netherlands; a matter that enabled AMAN to respond to the priorities and needs of the Palestinian people without any external interventions.

The GA issued a number of decisions that included endorsement of amendments to both the financial and administrative systems; expanding membership of the coalition that would be endorsed by the GA.

The members also agreed on expanding the Board of Directors to include nine members, in accordance with the bylaws endorsed last year.