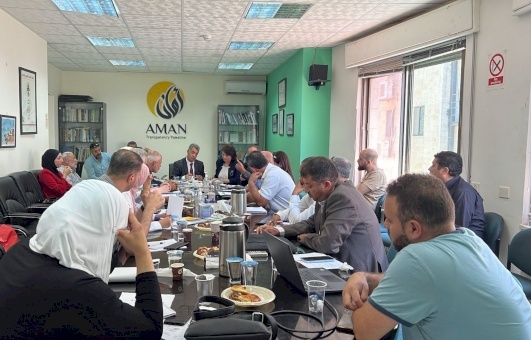 In a workshop to discuss the experience of land settlement in Palestine,

Ramallah – The Coalition for Accountability and Integrity (AMAN) held a session to discuss a draft report on The Environment of Integrity, Transparency, and Accountability in Functions of the Land and Water Settlement Commission. The event aimed at diagnosing current operations of the Land and Water Settlement Commission (LWSC), identifying gaps and challenges, and making effective recommendations to help decision makers to regularise the current situation.

In his opening remarks, Jihad Harb, Senior Researcher at AMAN, highlighted that AMAN’s interest in the land settlement process placed focus on three pivotal aspects: (1) land settlement is a central national issue to protect Palestinian land from Israeli settlement activity and measures which use Palestinian land as a reserve for settlements; (2) rights of Palestinian citizens need to maintained; and (3) an environment of integrity needs to be promoted in the LWSC functions in order to ward off any opportunities of corruption. This should, therefore, ensure proper public financial management as land and water are natural resources of the Palestinian people.

According to the AMAN report, the LWSC is of a specific nature. It is a temporary public institution that is tasked to finalise the land settlement process. This requires special operating procedures and mechanisms, which do not place additional burden on the public sector. The report finds out some exceptions to appointment through the general principle of recruitments into the public service, which should be grounded in equal opportunities and competition.

In relation to transparency, although a LWSC annual report is published, financial reports and strategic plan of the Commission are not posted the LWSC website.

AMAN: The government needs to adopt a national public policy on the land settlement process

AMAN recommends that the government adopt a specific and clearly defined national public policy in partnership with all stakeholders in the land settlement process. To this effect, the government will earmark sufficient budget allocations, which meet LWSC needs. As a priority national task, a reasonable time limit will be set to finalise the land settlement process throughout Palestine.

According to the report of the Directorate General of Complaints at the Council of Ministers, the LWSC is the second highest non-ministerial government body which receives complaints, accounting for 39.2 percent of all collective complaints. This is triggered by the sensitive situation of lands, including intractable inheritance disputes and problems associated with the recovery of rights. Also, complaints filed to the Palestinian Anti-Corruption Commission registered a sharp rise, particularly in 2020 and 2021. These indicate that there is confusion on the part of citizens, who fail to distinguish between challenges against decisions of land settlement officers and complaints. The latter involve land settlement services, abuse of public office, conflict of interests, or inaction. Challenges against settlement officer decisions are handled by the competent or land settlement courts.

Between 2016 and 2021, the LWSC signed 220 memorandums of understanding with local government units (LGUs). The fact that a specific and clear documented regulation on the establishment of committees is not in place allows room for some potential forms of corruption. Some people already have access to the settlement process and ownership of land under settlement, particularly those parcels with no claimed ownership. The AMAN report also provides a review of awarding land survey tenders for the purposes of land settlement. While the LWSC serves as an observer of technical issues on tender committees, the tendering process is managed by LGUs. Additionally, land settlement fees are not standardised among LGUs. The fact that a particular ceiling is not established reflects a situation of inequality, further undermining social justice and overburdening citizens.

Key problems raised by the report include the lack of a standard approach to decision making by land settlement officers as well as unclear powers given to these personnel. An obscure mechanism for exceptions from the land settlement process has generated an increasing use of discretion by land settlement officers, allowing room for objections before, and overloading, courts. Of note, 14 courts are operated by 19 sitting judges throughout the West Bank. These courts are crippled by a backlog of pending cases from previous years, compromising the land settlement process, exacerbating social and financial burdens on citizens, and undermining access to rights. Along this vein, AMAN recommends that the number of judges be doubled. Judges need to be rehabilitated in a manner consistent with a specialisation in land settlement cases. This should reduce the case backlog before land settlement courts.

Primary and secondary legislation on land should be upgraded

AMAN recommends that the body of legislation on land need to be reviewed and upgraded. In particular, land settlement regulations are not up to date. These were enacted over 70 years ago. Land regulations will also be finalised by passing an integrated package of legislation.

A set of procedural recommendations to be addressed

The AMAN report proposed a set of procedural recommendation to be implemented in order to address the current situation. Of these, a code of professional conduct will be compiled for LWSC staff members and respective partners. A clearly defined regulation will be developed to govern the committees of identifiers throughout LGUs. Clear standard procedures will apply to the investigation of claims, with relevant instructions being issued in accordance with the law. Specified procedures will be made to document, receive, and issue receipts for and duplicate copies of legal documents. Relevant circulars will be disseminated by the LWSC chair. Working mechanisms of land settlement officers will also be consolidated.

In her comments, Ms. Kifayah Baraghith, LWSC representative, stated that development of the LWSC Strategic Plan 2017-2022 was initiated, but has not been finished yet. As a result, the Strategic Plan had to be completed and updated to cover the period until 2032. According to Baraghith, each area is of a specific nature. Achievement is measured by the citizens receiving title deeds (land registration certificates). Woth of note, the LWSC is considered as a temporary agency until such time all land surveys are finalised. Some 1.2 million dunums were already surveyed by the Jordanian government and British Mandate authorities. Recently, 1 million out of 5.8 million dunums of the West Bank lands have been surveyed. Two thirds of the settlement process in the West Bank land remain to be surveyed.

The AMAN report recommends that the role of land settlement courts be enhanced by providing continuing training and rehabilitation to LWSC staff members and court judges. The LWSC will be supported by an adequate number of qualified personnel and teams to keep track of ground operations. A code of professional conduct will be in place. This was noted by Advocate Fadhel Najajreh, representative of the Palestinian Bar Association. As Najajreh put it, government bodies have not actually paid attention to the LWSC. A key challenge is posed by the lack of enough qualified staff members or informed judge to handle some 30,000 pending cases.

Discussants indicated that the ultimate challenge lied in land settlement offices. Personnel receive legal files and documents, but do not issue a number of incoming papers. There is no filing and documentation system to save cases, allowing an opportunity to hide some or reject some documents. Although a legal committee was established to investigate some complaints, the committee is not vested with powers by law nor does it have any legal value. The land settlement officer is the sole authorised person, who possesses relevant powers under the law.

Settlement panels should be separated from regular courts

Advocate Dawoud al-Wa’ari, representative of the Bayt al-Maqdis Law Firm, inquired about certain issues which were left unanswered or unclear to citizens. Two chairs (judges) of the LWSC were pensioned off without stating relevant reasons. Al-Wa’ari stressed the need for a clear regulation to govern committees of identifiers. These are among the most significant bodies in the land settlement process. He also called for drawing a dividing line between land settlement panels and regular courts. While informed judges are rehabilitated, the number of courts will be increased in order to dispose land settlement cases. According to Al-Wa’ari, failure to do so negatively impacts the social fabric. Some families are at odds due to protracted court proceedings and failure to dispose pending cases. A regulation is needed to secure documents and deeds. A filing system and archive will ensure that citizens’ rights are not lost.

Advocate Mohammed Abu Lafi, representative of the Abu Dis Municipality, stated that, by law, the land settlement officer is vested with powers that they do not put into effect, including the hearing of witnesses and examination of cases for disposition. Land settlement officers limit powers to paperwork, but also do not make sure that papers are authentic or not falsified.

According to Abu Lafi, residents of the towns of Abu Dis and Al-Eizariya with Israeli-issued ID cards face more challenges because they are forced to initiate proceedings before the Bethlehem land settlement court. Jerusalemite citizens are required to obtain an authorisation of purchase from the government.

Ms. Shiraz as-Safadi, representative of the Jericho Municipality, explained that the LWSC has ipso facto been in possession of powers similar to those of municipalities, giving rise to countless problems. As-Safadi also highlighted the fact that courts hear challenges in the absence of documents or papers in order to suspend a certain transaction. A challenge is on an equal footing with the citizens who possess documentary proof, allowing room for extorting property rights holders so that they withdraw their challenges.