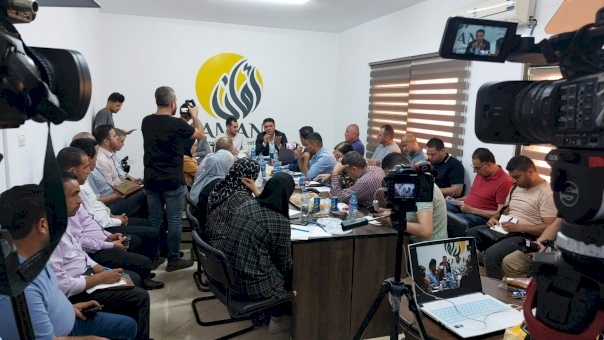 Gaza – The Coalition for Accountability and Integrity (AMAN) held a hearing and accountability session on the mechanisms for issuing permits to Gaza workers employed in the 1948 Palestinian territory. Widespread controversy has been sparked after the Ministry of Labour (MoL) in the Gaza Strip announced that 1,000 civil servants used permits to work in Israel. This has caused some confusion about the management of permit issuance and constantly raised a question about mechanisms for the selection of beneficiaries.

There was broad participation in the hearing session. In the presence of the Gaza-based MoL and Civil Affairs Authority (CAA), the session brought together representatives of a number of trade unions, human rights groups, and media outlets, as well as members of the public. These came in to ask the competent bodies about their applications and records or delayed responses to their complaints.

Engineer Ihab al-Ghusein, MoL Undersecretary, stated that the Ministry had opened registration for work in the 1948 territory between November 2021 and late April 2022. At the time, general conditions were applicable. A worker had to be married and over 26 years of age. Applicants ought not to be an employee or have a steady income. They should not be under a travel ban according to a court order. In addition to holding a COVID-19 vaccination certificate, applicants should not be infected with the virus. Against this background, a total of 102,700 applications were submitted on the website. Of these, 5,200 workers received work permits.

Commenting on the working relationship between the MoL and CAA, Al-Ghusein explained that the MoL had prepared and transferred lists of workers to the CAA. In line with the formal system, these lists are registered, audited, and approved online in tandem with publicly announced terms and conditions.

Al-Ghusein said that irregularities affected data lists. Some persons, who were registered as workers on the website, were staff of the Palestinian Authority or United Nations Works and Relief Agency (UNRWA). Others were owners of commercial premises or had a source of income. Media statements have caused confusion, reporting that 1,000 civil servants had access to permits. These infractions were an outcome of poor coordination between the MoL and CAA.

15 percent of humanitarian permits are assessed by the CAA

Engineer Iyad Nasser, CAA Chairman, asserted that the electronic database was outmoded and that work was proceeding on the development of the system. Of note, 15 percent, or 150 of 1,000, permits are issued to humanitarian cases. These are assessed by the CAA.

According to Nasser, 6,000 persons are under a security ban by the Israeli occupying authorities. The cases of these persons are being followed up with relevant CAA departments.

MoL: We will sort and separate work permits from economic needs

The hearing session generated discussion on applicants with coded commercial records. These do not have a terms of reference neither at the MoL nor at the CAA. Another problem arises from the classification of permits and separation of economic and commercial permits. Notably, the permits which used to be issued to all citizens fell under the category of “commerce”. Renewal of the permits of either category will not be an easy task. To tackle this problem, the MoL stated that, starting from 1 August 2022, it would convert economic permits to work permits, while at the same time maintaining all of worker benefits (work injuries, sick leaves, compensations, etc.).

The session contributed to reducing  the simmering tensions across the Gaza Strip. AMAN recommended that this vital issue, which affects the public, be distanced from political rivalries and the current internal Palestinian political divide. AMAN said that affected persons had the full right to access services impartially, justly, and on an equal footing. To coordinate joint operations, AMAN emphasised the importance of holding periodic meetings and maintain a channel of communication between the MoL, CAA, and Ministry of Economy in the Gaza Strip. A standard computerised system needs to be in place, including updates to each name, in order to keep citizens posted on relevant developments and increase their confidence in government institutions. The latter will be committed to making information publicly available with a view to removing any potential contradiction or ambiguity.

According to Q1 2022 statistical data of the Palestinian Central Bureau of Statistics, there were some 250,000 unemployed persons in the Gaza Strip, reflecting the dire need for work. This is particularly the case in view of the significant minimum wage gap between the local and Israeli labour markets.