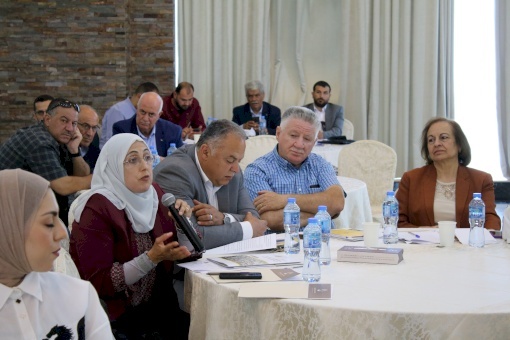 Ramallah – The Coalition for Accountability and Integrity (AMAN) held a meeting with newly elected heads of local government units (LGUs) 2021-2022 on the system of integrity and fight against corruption in LGU functions. The event aimed at immunising LGUs and promoting preventive processes and measures to ward off any opportunities for corruption within LGU operations. This effort requires interaction and engagement between citizens and LGUs with a view to realising the highest degree of effective transparency and accountability in LGU functions and service delivery.

In this opening remarks, Issam Haj Hussein, AMAN Executive Director, addressed citizens’ right to exercise community accountability. LGUs, particularly LGU heads, must be held to account. Members of LGU boards are answerable to citizens who have elected them. These members should will also play their role in holding to account the LGU heads they have selected. Haj Hussein stated that the “inverted pyramid of accountability” was the most common across LGUs. LGU boards consider themselves accountable to the LGU head, not the other way round. Commitment to transparent and impartial service provision will immunise LGUs against opportunities for corruption. At the same time, it protects LGUs from any charges involving tribal interference, nepotism, and favouritism in public service delivery.

According to Haj Hussein, fight against corruption is a priority for Palestinian citizens. Twenty eight percent of surveyed respondents were of the view that the challenge of fight against corruption must be a priority. This was followed by the Israeli occupation and economic issues (23 percent) and internal Palestinian political divide (13 percent).

Ms. Intesar Hamdan, Director of Awareness Raising and Community Outreach at AMAN, presented on and analysed results of the Integrity Index in the Functions of Local Government Units in Palestine, 2022. Initiated by Transparency International, AMAN has developed this tool in line with the Palestinian context. The index has been applied to 18 Palestinian LGUs across the West Bank and Gaza Strip with a view to immunising and making LGUs responsive to community accountability. In support of community accountability, it has also been tailored to raising awareness of LGU staff and members of local communities about best practices in the fight against corruption.

According to the index results, enforcement of the LGU Law revealed legal weaknesses, which undermine and limit the free discharge of duties by elected LGU boards. The Minister of Local Government assumes a highly centralised role in the management of LGU operations. A significant portion of LGU tasks and functions require the Minister’s approval, sometimes obstructing LGU work. There is also a lack of legislation, which regulates the working relationship between the private sector and LGUs.

While LGUs have an independent juridical personality, some laws are in breach of the principle of LGU independence. For example, Article 3 of the 2008 Law by Decree Amending the LGU Law vests the Council of Ministers with the power to dissolve LGU boards based on a recommendation, and at the discretion, of the Minister of Local Government. The Law by Decree also empowers the Minster to relieve LGU heads of their duties. Members will then elect a new chair to the LGU board.

Obstacles to LGUs in Palestine

Hamdan listed challenges that face LGUs. Various LGUs are poorly aware of the system of integrity and fight against corruption, first and foremost administrative and financial best practices. The tribal and familial culture also runs deep within LGU managements.

The Integrity Index results demonstrated the challenge of irregular local elections. In the Gaza Strip, the de facto authority has not allowed local election to be held since the internal Palestinian political divide took place in 2007, adversely impacting democratic and development processes within all 25 LGUs in Gaza. In addition to overlapping tasks and powers between LGUs and Executive agencies, financial resources are scarce. The central government has consistently failed to transfer the funds it collects on behalf of LGUs, including some taxes and fees. Disposition of cases involving LGU functions is delayed by Palestinian courts. Written instructions or manuals are inadequately rolled out to LGUs and LGU staff to help identify suspicions of corruption and methods of reporting corruption. Also lacking are rehabilitation programmes that introduce LGU staff to the forms, causes, and methods of fighting and reporting corruption.

According to reports released by AMAN, State Audit and Administrative Control Bureau, and Palestinian Anti-Corruption Commission, Hamdan pointed out key irregularities within LGUs. These reports highlighted financial and administrative infractions, conflict of interests, and abuse of power by some LGU heads and members. Public office is abused to provide employment and manipulate financial statements as well as accounting programmes and records in order to misappropriate public funds or keep collected fees for personal gains.

Contrary to the best practice of submitting written reports, results of AMAN studies indicate that the majority of LGU heads provide verbal reports to LGU boards. The system of receiving and handling complaints is also inadequate. Within different LGUs, clearly defined and publicly available mechanisms for objections to LGU decisions are lacking. While supervision of service delivery is insufficient, public service providers and private sector corporations are inadequately held to account. Should the need arise or when required, many LGUs put in place a mechanism for receiving written periodic reports from service providers or contractors. No cases were recorded of penalties imposed on any noncompliant companies, particularly in relation to delivery schedules for projects.

Control and audit of LGU functions are poor. Internal control and audit processes have not been institutionalised in many LGUs. External audits have only been applied recently. LGUs must voluntarily subject themselves to independent, qualified, and paid external auditors. Additionally, most LGUs are affected by weak procedures for enforcing codes of professional conduct, if any. Of note, some LGUs have not adopted codes of professional conduct for LGU heads and members or regulations on the receipt of gifts or avoidance of conflict of interests. Some LGUs are crippled by deficient employment processes, including in terms of job descriptions, competition, and announcement of vacant positions. Many challenges still persist, allowing opportunities for nepotism and favouritism in appointments or employment for partisan and familial considerations. An extended number of LGUs do not comply with the Law on Public Procurement. LGUs do not have in place policies and procedure manuals to set service fees and taxes, ensuring that the payment and collection of fees and taxes are not manipulated. No policy has been approved for publication and disclosure. When they publish and disclose information, the majority of LGUs use social media platforms, especially Facebook. A few LGUs make publicly available their budgets and reports. Among LGUs, there is limited understanding of the concept of community engagement.

While public awareness is raised, community accountability tools should be applied to LGUs

AMAN provided a number of recommendations, which could promote governance within LGUs. Values of integrity will be strengthened by approving codes of professional conduct for LGU heads and members. LGUs will adopt more principles of transparency when they discharge all their functions. They will also have in place mechanisms for decision making and publish administrative and financial reports as well as all LGU activities. LGUs will be open to and engage local communities and citizens. In addition to activating tools of control and accountability, LGUs will establish complaint handling units and develop relevant procedures within the framework of a special regulation on complaints. The Law on Public Procurement will be applicable to all procurements to furnish an opportunity for competition. LGU decisions, tenders, recruitment announcements, financial reports, and budgets will be made publicly available. The complaints system will be institutionalised and consolidated. Complaint forms will be posted on LGU websites and by all available means of publication.

Jihad Harb, Senior Researcher at AMAN, presented on another tool, namely, the Transparency Index within LGUs. Measuring 44 sub-indicators, this index aims at assessing the implementation of the principles of transparency in LGU functions. It gauges how LGUs are compliant with the policies and principles of disclosure as well as provision of information on relevant operations. Harb made clear that AMAN has published nine reports on the transparency index within LGUs between 2016 and 2022.

Having scored low in the Transparency Index, LGUs need to publish information and reports

AMAN reports recommend that greater disclosure and transparency need to be promoted within LGUs. Since they all had low scores without exception, LGUs need to adopt strategies for disclosure and publication of all information and operations. Websites will be approved as an essential mechanism for publishing and disclosing the information required by the Transparency Index. Also, social media networks should only be used as a secondary and complementary support mechanism to provide access to information by publishing short posts, including hyperlinks.

The code of professional conduct will be modified so as to include some indicators, such as disclosure of the assets and properties of LGU heads. The Law on the Right of Access to Information needs to be approved, providing that information and data will be dealt with as public records that citizens have the right to access without formal requests. The law will also delineate the mechanism for access to information.

In addition, the MoLG, Municipal Development and Lending Fund, and Association of Palestinian Local Authorities will be requested to develop municipal rehabilitation and empowerment programmes as well as to raise awareness of LGU staff about the importance of publication and community engagement. This should strengthen the principles of transparency and systems of accountability. LGU Public Relations Departments will take on a greater role and make more effort to launch, developed, and upgrade official websites. Detailed information will be posted and made accessible to the public.

Harb further recommended that control efforts be intensified and promoted by government control bodies, focusing on LGU commitment to publishing information. To ensure that LGUs maintain publication, deterrent measures will be taken in case they fail to do so. Greater awareness raising will introduce citizens to their right of access to information by making publicly available manuals and organising educational seminars and workshops.