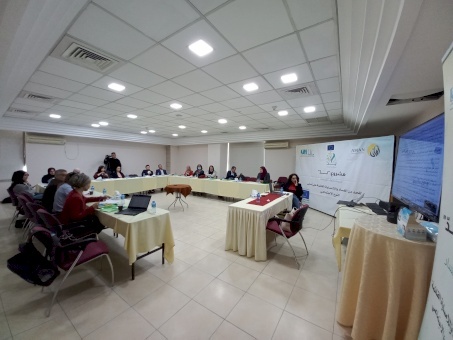 In a workshop held by AMAN and Women’s Center for Legal Aid and Counselling,

The Coalition for Accountability and Integrity (AMAN) and Women’s Center for Legal Aid and Counselling (WCLAC) held a workshop to discuss a draft report on A Review and Analysis of Anti-Corruption Legislation from a Gender Perspective. The report makes recommendations to improve and amend the Anti-Corruption Law as well as any relevant regulations and bylaws to be gender responsive and explicitly criminalise forms of gender-based corruption.

In her opening remarks, Ms. Intesar Hamdan, Director of Awareness Raising and Community Outreach, AMAN, highlighted shortfalls in legislation that should offer redress to Palestinian women, particularly in relation to the fight against corruption. Deficiencies also affect practice and enforcement of laws, which advance equity and access to justice for women in Palestinian society.

Ms. Fatima Da’na, legal researcher, presented the AMAN draft report, which provides a review of the Anti-Corruption Law and regulations, from the perspective of how responsive they are to human rights and gender. The review concluded that both the law and the regulations need to be amended so that they become gender responsive. To this avail, forms of gender-based corruption will be criminalised. For example, if committed by persons subject to the provisions of the law, sexual extortion reflects abuse of power when it is used by an employee to obtain sexual benefits. Sexual extortion falls within the framework of abuse of public office for personal purposes.

The report comes up with a set of recommendation. First and foremost, the law will provide a definition of moral corruption. This should cover aspects of gender-based corruption, such as sexual extortion, bribery, and harassment. The latter will be prescribed as an offensive act under the Code of Conduct for the Civil Service.

The report stresses the need to amend the Civil Service Law in force. To this end, an explicit provision will address sexual extortion and outline necessary disciplinary measures against offenders. A penalty will be prescribed for sexual harassment under the Anti-Corruption Law, Civil Service Law, and Penal Law, ensuring both a general and a special deterrent. Maintaining legislative harmony, the penalty of imprisonment and fine will be aggravated. An administrative disciplinary penalty will also be imposed on the perpetrators of this crime.

The report highlights the need to create new definitions, including of sexual bribes and consequent penalties, under the Anti-Corruption Law. Another article will be introduced, laying out the meaning of discrimination. This includes any act carried out public staff in their capacity as persons in power, implying distinction, exclusion, or preference on the basis of race, colour, gender, religious, political opinion, disability, national origin, or social background. Discrimination can eliminate or undermine equal opportunities, treatment, employment, or professional career. In violation of the law, discrimination is designed to obtain personal, material, or immaterial benefits, privileges, or advantages for a third party.

Mechanisms for protecting whistleblowers and witnesses in cases of corruption

The report also recommends that mechanisms for complaints on sexual extortion in civil service be adopted. Tools will be in place to ensure protection, confidentiality, and privacy of complainants in order to prevent reprisals. Penalties for breach of confidentiality will be prescribed, rolled out, and applied. In cooperation with gender units in the public sector, complaint handling units and internal control departments will be activated to address cases of sexual harassment. Protection and support networks will be created to raise awareness about mechanisms to address sexual harassment. Legal and psychosocial support services will be provided to complainants and/or victims. Processes will be put in place, taking account of the privacy of women whistleblowers, who report gender-based corruption crimes.