Ashrawi Calls on the EU to Investigate Sunday Times Report 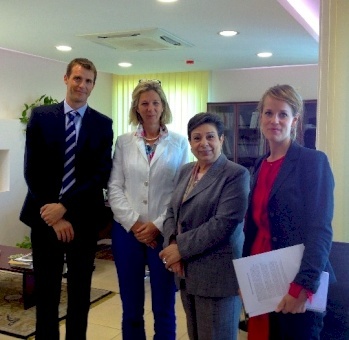 "Such a blatantly inaccurate report and subsequent commentaries constitute a targeted and flagrant attack on the Palestinian leadership and signify an attempt to slander the whole Palestinian political system. This serves an anti-Palestinian and an anti-peace agenda." Ashrawi continued, "It should be stressed that similar accusations have been made in the past and eventually turned out to be inaccurate."

She added, "Thus, we call on the European Union to investigate and debunk such claims of corruption that have nothing to do with corruption or combating it. It is evident that such reports are politically motivated and represent an attempt to put pressure on the EU to end its support for the Palestinian cause by maligning the Palestinian leadership."

Ashrawi's statements came during a meeting in Ramallah with Consul General of the Netherlands, Birgitta Tazelaar, Representative of Denmark to the State of Palestine, Anders Tang Friborg, and Swedish Consul for Political Affairs, Lena Skoglund.

She said, "We believe that this is a positive contribution by the EU to inject legality and fairness in the pursuit of peace. It is our hope that the EU maintains this position despite Israeli and American efforts to circumvent the implementation of the guidelines."