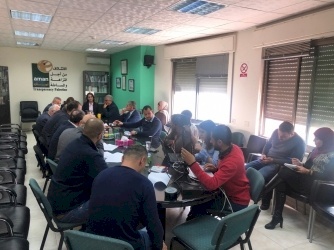 Ramallah – The Coalition for Accountability and Integrity (AMAN) held a discussion session on its recent report, titled The Pensions of Political Office Holders and Relevant Impact on the Public Treasure. The report examines the criteria and principles for the calculation of retirement benefits of political office holders in comparison to those applicable to civil servants under the public retirement system. The report assesses the impact of pensions on the ability of the Public Treasury to handle consequences of regulations on the appointment of political office holders. It also reviews the impact and importance of delivering justice in pension payment to different categories.

In its report, AMAN recommends that particular international experiences be consulted. Pensions should be paid for a maximum transition period of two years to retired political office holders until such time these beneficiaries take on new positions or businesses.

AMAN has compiled the report in light of an overall deteriorating financial situation in Palestine. The Palestinian government has already implemented several measures to rationalise public expenditure and reduce public budget deficit. AMAN hopes that the report provide the ground for making decisions and procedures, which can bridge gaps and tackle challenges associated with the pension of political office holders. The report should help achieve the goals of rationalising public expenditure, reducing waste of public funds, achieving justice among public servants, and sparing future generations from handling the consequences of the current system.

Conflict of interest and a distinction

Researcher Raeda Qandeel made a presentation on AMAN’s report. In Palestine, pension is a tool used by the State within the framework of a social protection policy with the aim of securing a dignified life to pensioners, who held public office. According to the report, the Palestinian legislature draws a distinction between beneficiaries from pension schemes. It approves of some regulations, which grant privileges to political office holders in the State, including the President, Prime Minister, ministers, members of the Palestinian Legislative Council (PLC), governors, etc. At the time, these regulations were only applicable to the respective law-makers, indicating incidence of conflict of interest. It was a common practice that decisions with financial consequences would not affect relevant makers, particularly members of the legislature.
The report reviewed the integrated enforcement of the Law on the Honoraria and Salaries of the Members of the Legislative Council, Members of the Government and Governors to relevant beneficiaries. The Law exempts these categories from contributing to the pension or insurance fund. They do not incur any financial burdens because they do not contribute to their own pensions, which are directly paid by the Public Treasury.

Pensions amount to 50-80 percent of the salary

AMAN’s report shows that the salaries of ministers, prime ministers, PLC members and governors range from US$ 3,000 to 4,000. Regardless of the period a political office holder spends in service, pensions are as much as 80 percent and as low as 50 percent of the salary. Salaries are paid in US dollars or its equivalent in the currency in circulation. An agreement was made with the government to set the US dollar rate of exchange against the Israeli shekel at NIS 4.2.

The Palestinian Pension Agency… is noncompliant

In terms of procedures, a problem is posed by the fact that the Palestinian Pension Agency (PPA) does not comply with law enforcement. The PPA does not prepare files or calculate pensions of retired political office holders, who are subject to the Law on the Honoraria and Salaries of the Members of the Legislative Council, Members of the Government and Governors. The Ministry of Finance continues to calculate and pay pensions under the so-called “loans item” until such time files are transferred from the PPA.

Pensions for life… a welfare or right?

According to AMAN’s report, there are approximately 261 retired holders of the political offices covered by the Law on the Honoraria and Salaries of the Members of the Legislative Council, Members of the Government and Governors. About NIS 26.5 million is paid in annual salaries to these beneficiaries from the Public Treasury.
Privileges are granted to some beneficiaries. Despite the fact that they do not contribute to the pension fund, pensions are paid to beneficiaries for life and, subsequently, to their heirs. This means that the Public Treasury affords these burdensome pensions. These expenses lack a corresponding source of revenue. In other words, the source of payment of these expenses generates from taxes, fees and other sources of State revenues. It is worth noting that political instability, irregular democratic process, and failure to hold elections on time in Palestine have contributed to reducing the number of these pensioners. Hence, fewer political office holders are covered by the Law.

Compared to the pensions of civil servants, in disregard of the principle of social solidarity, the Palestinian legislature entitles political office holders to pension benefits. Violating the principle of justice, the latter receive benefits from the State without making any contributions. On one hand, civil servants are normally required to spend dozens of years of in office so that they can receive a limited pension, which . This derives from a monthly contribution that is deducted from civil servants’ salaries in accordance with operative retirement regulations in Palestine. On the other hand, as indicated by the Law, a PLC member or minister who spends a maximum of four years in office receives a pension “and subsequently his heirs” without making any contribution. By contrast, in other sisterly countries, all categories are legally bound to contribute to their own pension schemes. The principle that pensioners, as well as their heirs, receive pensions for life is out of the question.

A representative of the State Audit and Administrative Control Bureau (SAACB) stated that the SAACB carefully examines the pensions of political office holders. This is an issue of good public financial management. According to the SAACB, the provisions which regulate the calculation of pension amounts and negatively impact the Public Treasury should be reconsidered.
A representative of the Ministry of Culture (MoC) was of the view that the problem lies in legal provisions that need to be amended. Taking account of our current situation, the amendment process will not be at the expense of the dignity of those who have made significant contributions to the homeland. The MoC representative stressed the need to be informed by relevant progressive experiences to prevent depletion of the public budget and put an end to the violation of justice under the law.