AMAN recommends the establishment of the Independent Telecommunications Regulatory Commission 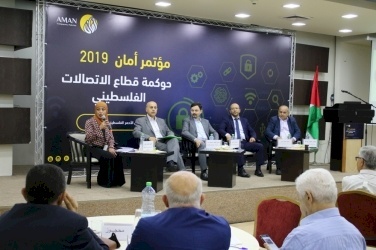 Ramallah – The Coalition for Accountability and Integrity (AMAN) recommended that the Council of Ministers take prompt action to establish the Independent Telecommunications Regulatory Commission (TRC) as provided for by the Law by Decree No. 15 of 2009. In addition to regulating the telecom sector, an informed policy will guide the Ministry of Telecommunications and Information Technology (MoTIT), as well as the broader government, to ensure a clear separation between policy making and regulation processes. The roles of the MoTIT and TRC will be delineated. While maintaining its independence, the TRC will ensure representation of consumers. The government needs to expedite action to approve a modern and general law, which gives the government and MoTIT the flexibility to keep pace the rapidly growing telecom sector. The new law will prescribe penalties and fines in cases where service providers do not comply with relevant licence conditions. The current law imposes penalties on persons who encroach on telecom networks, but does not penalise telecom companies when they abuse citizens’ rights.

In relation to governance, AMAN recommended that the MoTIT separate telephone landlines, which are not subject to market competition, from the competitive ADSL service provision. The Palestine Telecommunications Company (Paltel), Palestine Cellular Communications Company (Jawwal) and Hadara Internet Services will be completely separate from one another, both financially and administratively. AMAN also recommended that the MoTIT make develop policies and mechanisms to keep away from technology dominance and ensure technology neutrality with a view to facilitating connection between operators and avoid additional financial burdens on new ones. Fair competition and equitable opportunities will be furnished to encourage innovation and investment in the telecom sector. Open-source networks will be introduced and connection prices reduced. Inclusive services will be delivered to all regions, including cities, villages, refugee camps, as well as advantaged and disadvantaged areas.

AMAN called on the government to ensure optimal use of infrastructure. To this end, an approach to partnership and participation will be in place. The government will also enforce the right of access to the telecom infrastructure and exchange points. It should not allow to replicate existing experiences.

AMAN stressed the need to ensure transparency by disclosing and making publicly available all agreements concluded between the Palestinian Authority and other parties in relation to the telecom sector. These include legal and technical agreements and annexes to the Paltel licence. The MoTIT needs to publish all technical reports on network development, particularly the fixed telecom network. A policy will be adopted to disclose Paltel Board members and the amounts each receives.

AMAN highlighted the need to allow the Jerusalem District Electricity Company to use its fibre optic network to free telecom infrastructure and ensure it is not monopolised by telecom or internet service providers. The government should optimise natural resources, including the Palestinian electromagnetic spectrum and telephone numbers. Citizens will have the right to move from one network to another, contributing to further competition between operators and reducing service cost. Ooredoo Palestine will pay the remaining amount of its licence price. In addition, AMAN recommended that the MoTIT cancel all unused licences, particularly broadband permits which are offered for sale in violation of the law. New licences will be issued in line with a new policy that prohibits trading licences. AMAN also submitted many other detailed recommendations.

Recommendations were submitted in a letter sent by AMAN to the Ministers of Telecommunications and Information Technology. These are informed by the Conference on Governance of the Telecommunications Sector in Palestine, held by AMAN on 11 September 2019. A transparent, integral and informed regulation is needed to improve the quality, and affordable prices, of telecom services delivered to the public. AMAN expressed its hope that its recommendations be taken into account and implemented soon.