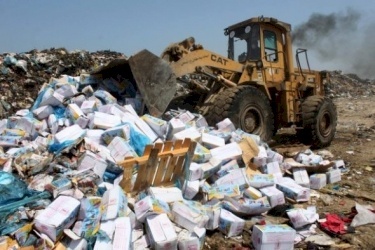 Ramallah – The Coalition for Accountability and Integrity (AMAN) called on the government to take seriously the issue of smuggling hazardous electronic waste into the West Bank governorates due to grave environmental and health consequences. AMAN expressed its hope that this issue is given priority on the Council of Ministers’ agenda. AMAN called for investigating the statement made by the Head of the Palestine Environment Quality Authority (PEQA), releasing a list of the names of persons implicated in e-waste smuggling, and take necessary deterrent measures in accordance with applicable laws.

In a letter it had sent to His Excellency Dr. Mohammed Shtayyeh, the Prime Minister, AMAN recommended that all judicial and legal measures be taken in cases of waste smuggling. More severe penalties should be imposed on offenders. A resolute political decision needs to be made, enabling relevant government bodies, including the PEQA, security agencies and local government units, to follow up on this issue as a national priority and address the reasons for widespread smuggling. AMAN asserted that dump trucks cross Israeli checkpoints with the knowledge of and in coordination with the Israeli occupying authorities. Waste smuggling directly and deliberately targets Palestinian citizens, land, environment, public health, and natural resources.