Making the change, more than 500 marginalized citizens in Al Mighraka and Al Malalha are getting ready to combat corruption in humanitarian aid

After the launch of its campaign “Reinforcing Al Mighraka and Al Malalha’s right in a fair distribution of aid”, the local committee of Tajaawobprogrammein those areas began a series of awareness sessions to prohibit corruption in humanitarian aid distribution.

These efforts came in response to the general and urgent priorities of the residents of Al Mighraka and Al Malalha. This awareness raising campaign comes to respond to the worries of the citizens of Al Mighraka and Al Malalha in the aftermath of the last aggression. On top of these worries is the lack of humanitarian aid as it doesn’t reach these areas which are the most marginalized. Moreover, this aid is not being distributed fairly among beneficiaries such as the poor and those damaged by the war, who witness several facades of corruption practiced in aid distribution, such as favoritism and theft. Having no official body to turn to and answer their inquiries, the local committee of Tajaawob –representing them- took the responsibility of clarifying everything ambiguous and undeclared to the vulnerable and marginalized citizens through this awareness campaign that aims to enhance fair distribution of aid in Al Mighraka and Al Malalha.

The local committee of Tajaawob held 22 awareness sessions in the two areas that aimed to raise awareness among citizens regarding concepts related to prohibiting corruption when delivering aid. These concepts are based on values such as integrity, transparency and accountability in addition to guiding principles of offering humanitarian aid and its life cycle. The committee depended on the anti-corruption in humanitarian aid guide developed by AMAN in achieving its goals.

The series of raising sessions that were held resulted in raising the awareness of 512 citizens in Al Mighraka and Al Malalha of concepts such as corruption and other related concepts. They were also introduced to the nature of humanitarian aid, forms of corruption; guiding principles and control standards of delivering fair humanitarian aid, corruption free and delivered to its beneficiaries.

The local committee took appropriate measures to reach all citizens in their residence taking into consideration the hard living conditions and their incapacity to reach out to organisations that advocate for their rights. Hence, the committee succeeded in implementing 14 awareness sessions in Al Mighraka targeting 7 residential neighborhoods: Abu Huraira, Al Qadeseyya, Al Taqwa, Badr, Al Saqa, Abu Kamil, and Al Rahmah. Moreover, it implemented 8 awareness raising sessions in Al Malalha village for men and women. More precisely, 188 male and 324 female participatedin the meetings.

The participants were proactive during the meetings and expressed their interest in learning about standards of humanitarian aid distribution and forms of corruption practiced by the organisations responsible of that. The participants shared some of the corruption cases they experienced and their desire to address credible centers that advocate for them and help solve their cases and complaints.

“I went with my son to receive aid from one of the associations in Al Mighraka. We were photographed receiving a big food parcel but after the photo we were only handed less than half of the parcel”, said one of the participants from Abu Huraira quarter in Al Mighraka. This incident reflects a suspected case of corruption in stealing aid from beneficiaries. Another woman complained because she was deprived from receiving assistance saying: “I received a message on my mobile from an international organisation to go to association “S” in Al Mighraka to receive a food and hygiene parcel, which meant my condition applies to the standards of this international organisation. When I went there to receive the parcel, the responsible of the association told me there was nothing for me and I’m not considered a beneficiary. I am sure the responsible replaced my name and offered the aid to another person who matters to him”. This case also reflects a suspected corruption represented in favoritism and stealing aid from a beneficiary.

Tajaawob programme held a training course in managing awareness sessions in anti-corruption in humanitarian aid targeting the local committee of Al Mighraka and Al Malalha to empower them to launch and implement the campaign. The Coalition for Accountability and Integrity (AMAN) thrived to make a success out of the awareness campaign by linking Tajaawobprogramme and the advocacy and legal guidance center sinceTajaawob’s awareness campaign coincided with the “clean hands” campaign implemented by the advocacy center to enhance access of humanitarian aid to beneficiaries. The citizens of Al Mighraka and Al Malalha were informed about the standards of aid delivery and forms of corruption through Tajaawob’s local committee. They were also informed of the mechanism of delivering their complaints to the advocacy center which will follow up on them and advocate for the people of Al Mighraka and Al Malalha by investigating cases of corruption that they report. Hence, the advocacy center in AMAN launched Tajaawob committee that has 4 legal consultations and 5 suspected corruption cases that the center seeks to investigate and resolve as a first important step to support marginalized citizens.

Citizens of Al Mighraka and Al Malalha call for questioning stakeholders regarding offering humanitarian services
During the series of sessions, most recommendations of the participants requested from Tajaawob to continue highlighting the cases of Al Mighraka and Al Malalha’s residents. Moreover, they asked for support in addressing competent bodies and helping them reach competent people in the Ministry of Social Affairs and in international organisations to question them about the lack of humanitarian services in Al Mighraka and Al Malalha as well as the unjust distribution on beneficiaries.
It is to mention that “Tajaawob” programmeis funded by the British Department for International Development(UK). Managed by the British Council, it is implemented in the West Bank and Gaza strip in a consortium withthe Coalition for Integrity and Accountability “AMAN”, the Palestinian Initiative for the Promotion of Global Dialogue and Democracy (MIFTAH), Palestinian Vision, and the International Development Fund of the BBC Media Action. 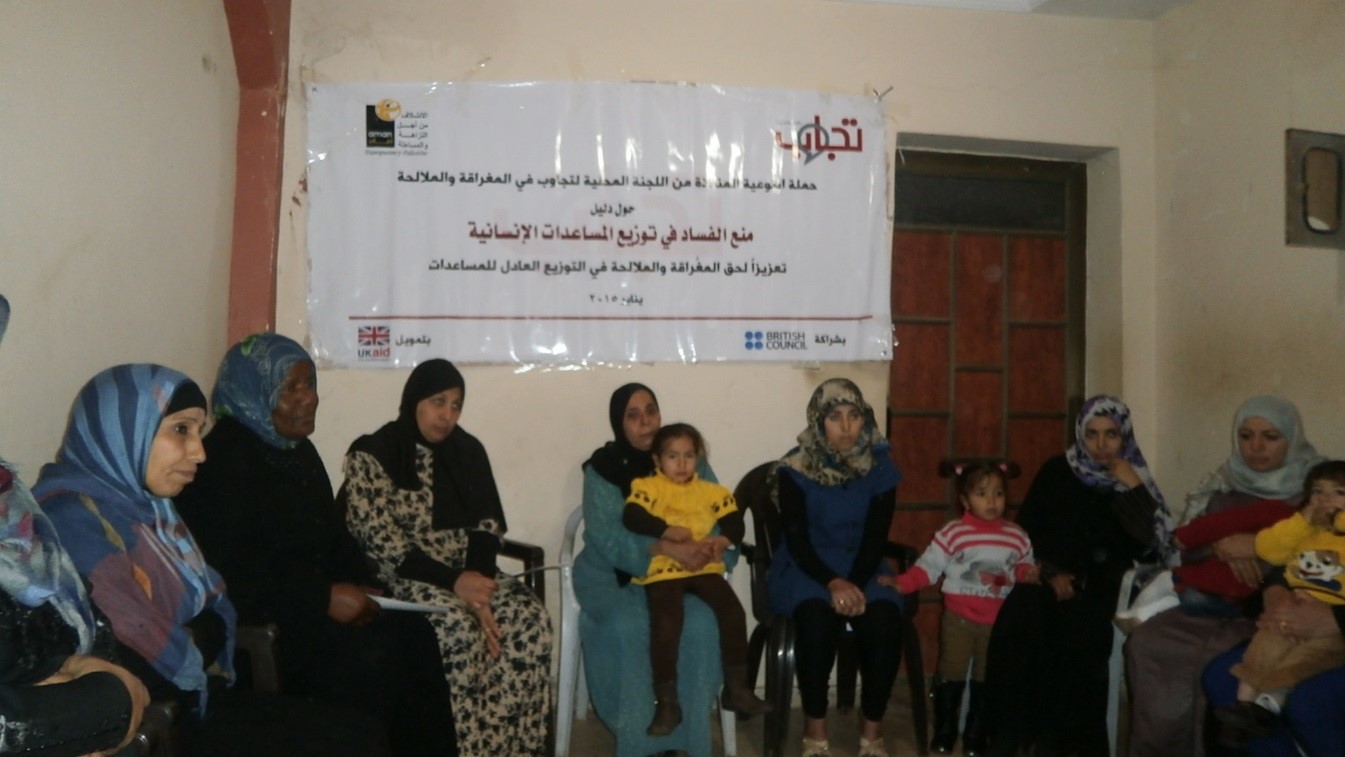 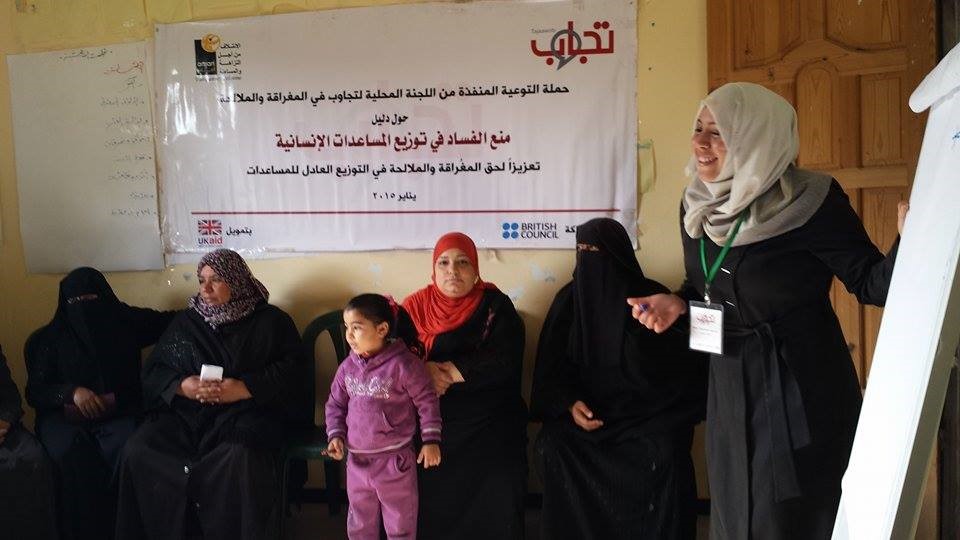 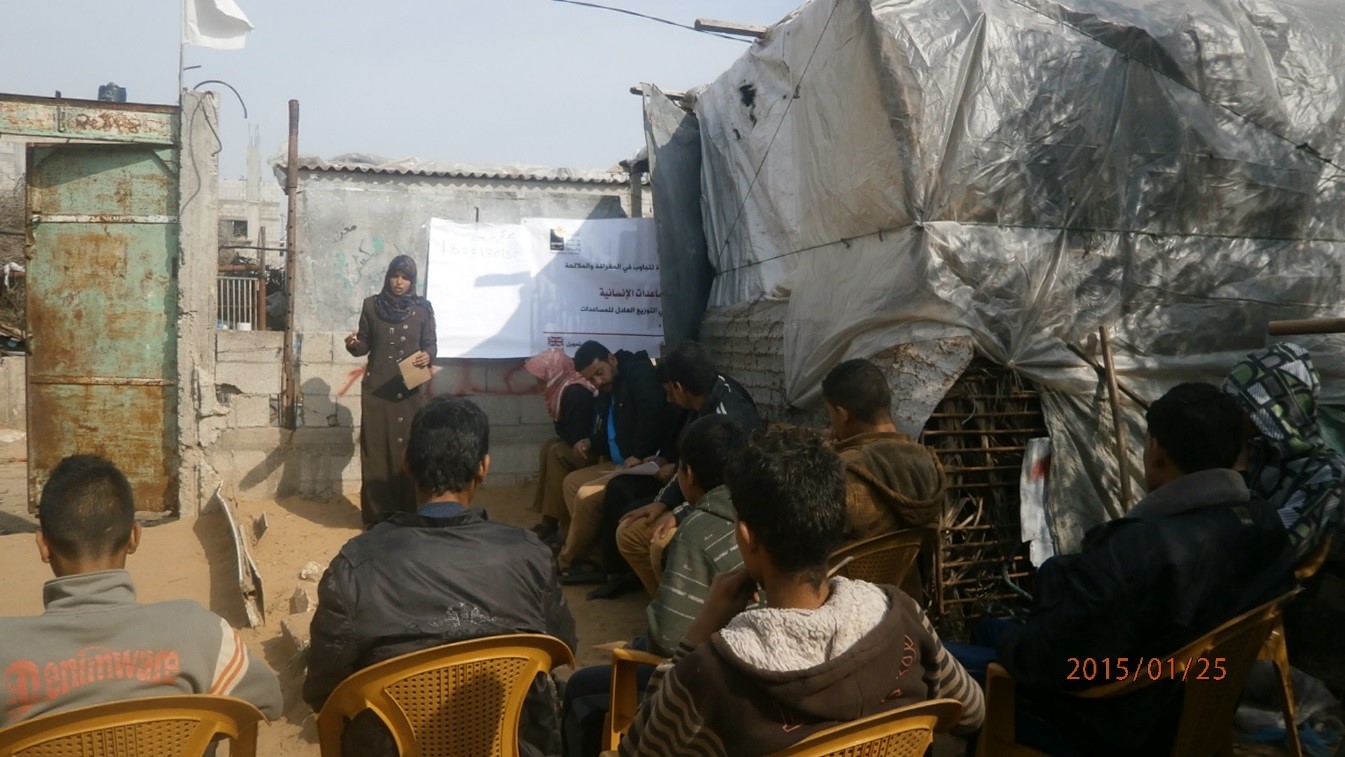 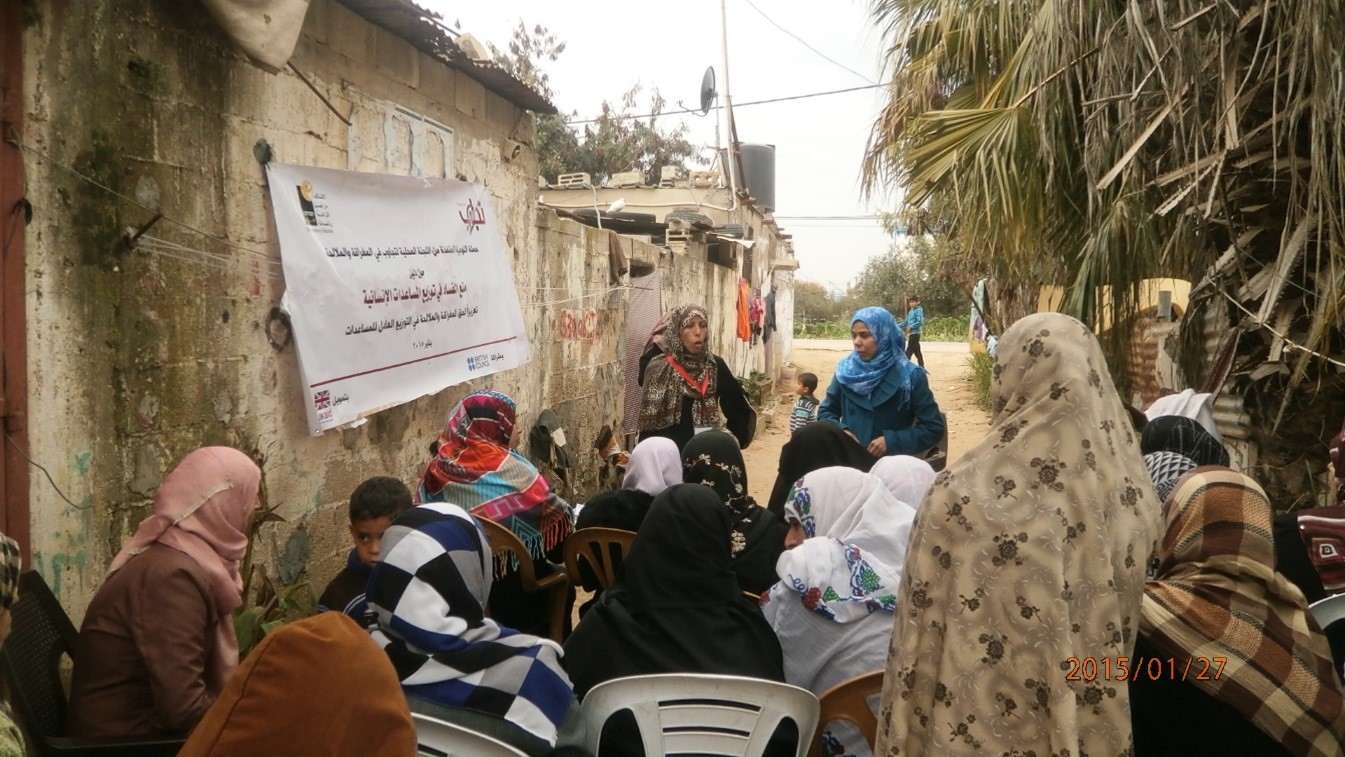