Recommending the need to hold a Council of Ministers’ meeting chaired by the President, JDECO case rests on the shoulders of the President 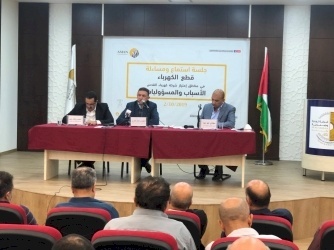 Ramallah – The Coalition for Accountability and Integrity (AMAN) held a hearing and accountability session on the electricity crisis at the Ramallah Chamber of Commerce. The session aimed at soliciting factual information from relevant authorities and informing the entirely eliminated Palestinian community of the causes of the power failure. Electricity is cut off in spite the fact that the vast majority of Palestinians pay their electricity bills. The session also sought to identify the causes of, and find solutions to, the current electricity crisis.

The session came up with a set of recommendations: To be chaired by the President, an urgent meeting should be held, bringing together the Council of Ministers and relevant authorities, to deliberate how the power outage in the concession areas of the Jerusalem District Electricity Company (JDECO) could be tackled. This should sustain the viability and ensure the continued operation of JDECO in the face of Israel’s attempts to seize control of or liquidate the company. The government needs to deal with Palestinian citizens openly, candidly and transparently. All facts and information on the electricity sector should be made publicly available.

Mr. Majdi Abu Zeid, Executive Director of AMAN, moderated the session and raised public inquiries about the insistence on failure to engage Palestinian citizens in particularities of the prolonged electricity crisis. Strangely enough, citizens are still held responsible for the power blackout. Agreements or memorandums of understanding signed between relevant parties (i.e. the Israeli occupying authorities, Palestinian government, and JDECO) are deliberately kept confidential. Information on the obligations of each party is equally inaccessible. The amount of the actual debt owed by JDECO is also unknown. In the context of ongoing recriminations, the government and JDECO are holding each other responsible for the electricity crisis. According to Abu Zeid, the root causes of the problem are politically, rather than financially, motivated. The electricity crisis is an issue of national security. It concerns the provision of a basic service to Palestinian citizens. Abu Zeid stressed that citizens need action, not just words and statements on a vital service that is essential for their existence and perseverance.

There are no agreements with the Israeli side; all that exists is a defunct MoU

Responding to the fact sheet presented by AMAN, Engineer Thafer Milhem, Chairman of the Palestinian Energy and Natural Resources Authority (PENRA), denied the existence of an agreement on electricity between the PENRA and Israeli government. According to Milhem, after a MoU was signed in September 2016, negotiations were launched in an attempt to reach an agreement on regulation and transfer of powers to the Palestinian government. The MoU mainly provided for creating an independent Palestinian market, which is capable of meeting Palestinian citizens’ needs and securing supply of electricity at affordable prices. A debt workout would also be agreed between the Israel Electricity Company (IEC) and Palestinian government. As Milhem put it, contrary to public perceptions, the MoU never envisaged the installation of transmission and relay stations.

According to Milhem, the negotiation process did not result in an agreement. Negotiations were crippled by 77 points of disagreement with the Israeli side. Later, these were reduced to 34 moot points. Two months ago, the Palestinian side suspended the negotiations, refusing Israeli regulatory conditions. To allow Palestinians to invest in the construction of solar power stations in Area C, the Israelis stipulated further control over this area. They would charge 6 percent for the electricity tariff, whereby Palestinians would pay an estimated amount of NIS 70-80 million.

The Israeli occupying authorities punish Palestinians and abandon their obligations

Milhem made an overview of the government’s efforts and negotiations with the Israeli side to deduct interests on the JDECO debt. Out of a total debt of NIS 2.48 billion, interests were as high as NIS 173 million in 2016. NIS 561 was collected for electricity distribution companies. This amount was paid as social support to the elderly in Israel (NIS 1.2 per kilowatt-hour, JDECO tariff, and other distributors). Milhem also stated that Israel declined the deduction of NIS 160 million from the total JDECO debt after the Palestinian side had refused to sign the unfair agreement proposed by the Israel side. In addition, the United States’ NIS 100 million contribution was withdrawn following suspension of US aid in early 2018.

According to Milhem, although the collection rate was 95 percent, the deficit is caused by Palestinian communities that never pay electricity bills. Lacking any form of control, these mainly include refugee camps and some communities in Area C. Milhem called for concluding an agreement with the popular committees of refugee camps and expose commercial and industrial establishments so that they are forced to pay overdue electricity bills.

Milhem gave examples on some individuals who steal and sell electricity from high-voltage transmission lines, without paying back to JDECO. Mostly located in Area C, some major industrial establishments owe more than NIS 100 million in debt to JDECO. Beyond control and without meters, some villages in the Jordan Valley are connected to the electricity grid. Electricity theft comprises 12 percent. Combined with electricity theft (also known as black loss), technical loss is as much as 22.65 percent. This covers technical loss as a result of deteriorating networks and poor maintenance, as well as black loss caused by theft and failure to pay due electricity bills, particularly by public institutions and some refugee camps.

Milhem held the Israeli occupying authorities responsible for cutting off the power supply. Scheduled power cuts will affect JDECO’s concession areas. According to Milhem, electricity cuts constitute a legal violation as it affects both payers and non-payers. The Israeli Knesset has legalised power cuts as a collective punishment against the Palestinian people.

Al-Omari: JDECO does not charge even NIS 1 from the PA

Engineer Hisham al-Omari, JDECO Board Chairman, stated that JDECO paid a total of NIS 330 million to the Ministry of Finance (MoF). The problem lies in money transfers from the MoF to the IEC. There is also a debt standstill of another NIS 630 million. This should be paid by the MoF in 48 instalments when the final agreement is signed.

According to Al-Omari, JDECO feels it is being punished by the Palestinian Authority (PA). JDECO does not charge even a single NIS 1 from the PA. The problem lies with the communities, which do not only fail to pay due electricity bills, but also prevent JDECO from inspecting electricity meters. There is a debt of NIS 508 million due by 13 refugee camps. JDECO also owes NIS 100 million from major consumers, including factories and companies. Some of these owe as much as NIS 1 million. Together with its legal advisor, JDECO is considering the possibility of revealing the names of persons in default of payment. Al-Omari also called for devising a just political solution for JDECO.

Early on, AMAN has pressed for enacting a Palestinian law to regulate the electricity sector. After the General Electricity Law No. 13 of 2009 was promulgated, AMAN continued to exert pressure to realise the principles of governance in the management of this sector. Clear dividing lines should be also drawn between the policy-making body (PENRA), regulatory body (Palestinian Electricity Regulatory Council), and implementing agency (JDECO). Additionally, AMAN has stressed the need to comply with the principles of transparency and provide public access to information, particularly agreements relating to the electricity sector.

AMAN will continue to address this critical and vital issue, which has a significant bearing on all economic, developmental, social and political aspects of life. AMAN believes in the need to engage citizens in all developments associated with the electricity sector.