Ramallah Municipality gets into international experience to enhance integrity , transparency and combating corruption in local bodies 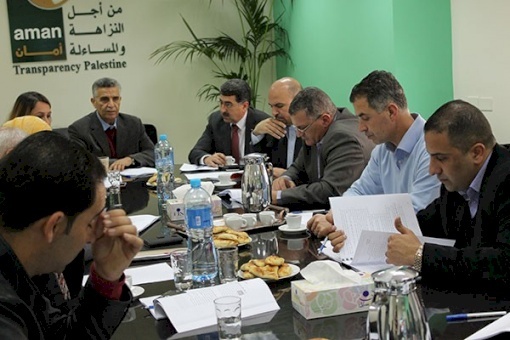 Aman held a meeting to discuss a draft to study the environment of integrity in Ramallah Municipality in order to examine the applicability of the integrity indicators prepared by the International Transparency Organization to produce a world guide to enhance integrity in municipalities .The mentioned study was executed to evaluate the level of transparency of the procedures of service provision, the effectiveness of the work system in the local bodies in regard of the level of integrity and accountability in addition to evaluate the role of the local bodies in community accountability .

The Head of Ramallah Municipality Mr.Mousa Abu Hadeed participated in the meeting and the General Manager Mr.Ahmad Abu Laban in addition to representatives of the related parties like the Ministry of Local Affairs, the State Audit and Administrative Control Bureau ,Union of Local Bodies ,Supreme Judicial Council ,academics and representatives of local institutions.

In a welcome speech, the Commissioner of Aman for combating corruption Dr.Azmy Al-Shuaiby pointed at the policy of openness that the Municipality of Ramallah follows towards the civil community and the obvious will towards developing and enhancing integrity in their  work . Al-Shuaiby noted the successes of Aman in the participation of enhancing integrity in the work of the local bodies which were  represented in the implementation of the developed indicators' guide from the International Transparency Organization.

AMAN was chosen a representative of the Middle East and North Africa in addition to four countries :Kenya ,Senegal ,Portugal and Argentina to examine the applicability of the indicators on a local body represented in the Palestinian case with Ramallah Municipality .The study author Mrs.Raeda Qandeel made a presentation about the results related to Ramallah Municipality which were considered good and expressed  an established  municipal work regulated with procedures and work systems like the availability of a complaint system for the citizens ,procurement system appropriate to the requirements of integrity and transparency that limits the conflict of interest. Also, the Municipality works with clear strategy ,vision and massage and it prepares the yearly budget with the local community ,committed to transparent  employment procedures and executes community meetings and activities with the participation of the citizens.

According to the gaps in the work of the Municipality ,they were represented in the failure to approve codes of conduct and the members of  the Municipality are not committed to fill in the financial disclosure which was distributed by the Commission of Combating Corruption.

For his part ,the Head of the Municipality rendered thanks to Aman and praised the methodology of the study and confirmed  the desire of the municipality to develop integrity in its work and he was proud that Palestine participated in producing the world guide related to local institutions. The participants were interested to show comments about the study.