The opening of the first exhibition in Hebron Titled: “No for Wasta inside Palestinian Society” 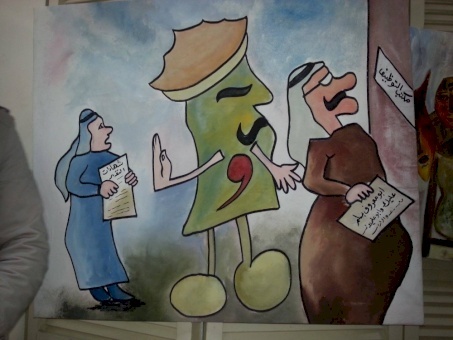 Noor EddinSarisi from “Shams” center stated that this exhibition conveys a specific message through art and that the importanceof this initiative comes within the framework of the national strategy which is adopted by AMAN to combat corruption in cooperation with civil society organizations believing in the role of art and its mission in enhancing the positive understanding of society and the embodiment of integrity. Also highlighting  the real partnership between “AMAN” and “Shams” centers in detecting the corruption and the criminalization of all  its forms as well as prosecuting the corrupted.

Participants in the exhibitionincluded: The faculty of art of Al Najah National University, Tubas education directorate , Palestine technical college in addition to  Mohammad Sharif Obeid, AreejZeidan and Murad Daraghmeh. The exhibition included 34 paintings reflecting the role that art and artists in raising awareness in society with regard to national and social issues that affect the nation as well as citizensespeciallythose related to the corruption in all its forms and how to prevent and combat it through works of art.