Titled "Who do We Hold Accountable?" 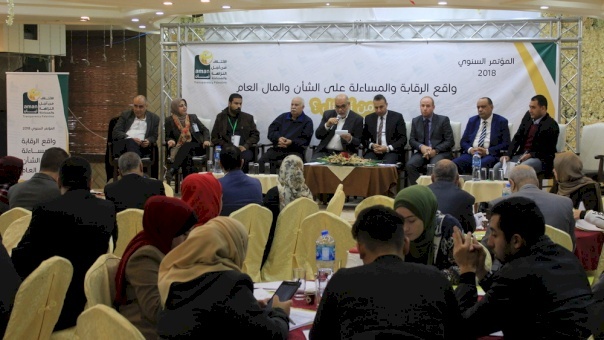 Gaza – Citizens, representatives of factions and civil society organisations, and many academics and legal persons called on government bodies and oversight institutions, first and foremost the Palestinian Legislative Council (PLC), State Audit and Administrative Control Bureau (SAACB) and Public Prosecution in the Gaza Strip, to improve accountability and oversight systems in public administration and public financial management. In addition to reviewing operating procedures, policies will be made with a view to promoting pursuing corruption cases and prosecuting corrupt individuals. These will reflect the serious efforts invested by government bodies to fight corruption on the ground. These calls were addressed in the annual conference held by the Coalition for Accountability and Integrity (AMAN) under the theme The Reality of Oversight and Accountability of Public Administration and Public Financial Management: Who do We Hold Accountable?

In his opening remarks, Mr. Issam Younis, AMAN’s Board Member, the conference was tailor-made to engage everybody in assessing public institutions’ performance in the oversight of public administration and public financial management. It furnished an opportunity to exercise accountability in light of the obscure channels of accountability since the National Reconciliation Agreement was signed in November 2017. Because the Palestinian government did not assume the full extent of its tasks, public administration has been in a state of confusion and disarray, negatively affecting public life. While public service provision has generally declined, more challenges have dogged the civil society, undermining prospects for public accountability.

The conference included a review of the key findings of AMAN’s Citizens Annual Opinion Poll on the Reality of Corruption and Anti-Corruption Efforts in Palestine 2018. Younis announced that AMAN would publish the complete opinion poll in the period ahead. The issues deliberated by the annual conference required that reference be made to the poll results, which reflected citizens’ views on the efforts made by oversight bodies in the fight against corruption. In this context, 31 percent of those surveyed in the Gaza Strip were of the view that the Gaza-based anti-corruption monitoring agencies performed their role and tasks effectively. By contrast, 66 percent believed otherwise.

Putting the war on corruption first

Mr. Wael Ba’alousha, AMAN’s Gaza Office Director, opened the first session. Ba’alousha stressed that the war on corruption needs full operability of the legislature, which needs to play its oversight role. According to Ba’lousha, the legislature is the zenith of accountability. It is the house that represents and defends people’s rights. The legislature exercises control over public performance to ensure the reform of public institutions.

The session provided a review of the current context of formal accountability as well as effectiveness of the PLC in the areas of oversight, accountability, and fight against corruption. According to presentations, the PLC is impaired weakness and inefficiency in view of its dysfunction for the twelfth year in a row. The PLC inaction reflects a deep loss of a key tool of oversight and accountability, including holding the executive branch of government to account.

The inter-Palestinian political divide debilitates the fight against corruption

All conference presentations coincided that Hamas’ PLC bloc has recently taken steps towards openness to citizens and furnished an opportunity for community accountability. In this context, Hamas’ bloc published the Parliamentary Procedure Manual, including public complaints handling mechanisms. However, due to disregard of public demands, real response to consolidating community accountability has been almost pro forma.

Consolidated Public Prosecution in the West Bank and Gaza Strip

It was stressed that expedited action should be taken to resolve issues involving prosecutors to empower them to carry out their tasks in an enabling environment. A legal framework for the fight against corruption should be developed timely. This is urgently needed to reinvigorate the Public Prosecution’s role in pursuing corruption crimes. The institutional framework of the Public Prosecution in both the Gaza Strip and the West Bank should also be consolidated. Like the West Bank, an anti-corruption prosecution office will be structured and established in the Gaza Strip to serve as an authorised body of the Palestinian Anti-Corruption Commission.

The conference also reviewed the effectiveness of, and positive developments seen by, oversight bodies in the Gaza Strip. Over the past two years, the number of complaints has risen, indicating enhanced public awareness of corruption cases and how to access public rights. An Anti-Corruption Prosecution and Corruption Crimes Unit were established at the Police Inspector General Office. A representative of the SAACB reported that the Bureau has reviewed some irregularities at government bodies. During the past two years, however, an oversight body has not been in place to ensure implementations of the SAACB report recommendations.

Citing the importance of the community accountability approach, the second session provided an overview of the current context of community accountability. To improve livelihoods and eliminate corruption, presentations stressed the need for concerted efforts between all relevant sectors. Both the civil society and the media will assume their responsibility and play an optimal role in the oversight of public administration and public financial management, improving response to citizens’ requirements and aspirations.
Participants stressed the need for a contemporary law on journalism and the media. A number of effective laws will be amended, including the 1936 Penal Law and Cybercrime Law, to safeguard the right to freedom of expression and fight against corruption. Protection will be provided to journalists and whistleblowers. Reflecting their firm belief in the journalists’ right to play their role, ministries and security agencies will comply with the law. Discrimination on grounds of political affiliation will be avoided. Participants also highlighted that investigative reports should be viewed as a significant entry point and as an official report filed to the Attorney General to open investigations into reported suspicions of corruption. All media representatives said the fact that a Law on the Right of Access to Information has not so far been enacted precludes access to, and real accountability of, corrupt individuals. It also undermines the role of the fourth estate and journalists, preventing effective accountability.

Local committees are an effective component of the accountability process

To overcome the problems generated by the inactive PLC, participants discussed how effective the civil society is in the oversight and accountability exercise. Gaza-based institutions will be engaged in community accountability activities. With a particular focus on the role of local government units, local communities will also be organised so that they acquire advanced skills and capacities to hold public officials to account. Community actors, such as local committees, will take part and engage in multiple forms of community accountability. These activities include effective hearings and inclusive budget exercises as an approach to participatory development and planning processes. In this context, local committee interventions will be linked to the National Policy Agenda and strategic plans of ministries and local government units to ensure more effective community accountability.

The Conference brought about a range of recommendations. In the first place, speedy action will be taken to hold periodic presidential, legislative and local elections with a view to promoting political pluralism and improving effective accountability and oversight of the executive performance. Established by a decision from the Council of Ministers, the Committee for the Alignment of Palestinian Laws and Regulations with International Conventions will be rejuvenated. Therefore, the conventions, which the State of Palestine acceded to, will be more responsive to the fight against corruption and promote integrity, transparency and accountability in public administration and public financial management. In addition to enforcing the Anti-Corruption Law, the Law on the Right of Access to Information should be enacted, spelling out the duties of officials and civil servants to provide information and disclose the agreements signed by the government. In relation to civil servants, legal rules on conflict of interests, receipt of gifts and hospitality will be developed. Financial disclosure statements will be in effect. Official policies will be adopted to institutionalise the tools of community participation and accountability. Municipal budgets will include a line item to embrace community initiatives for promotion of accountability. These initiatives will provide an analysis of the impact of corruption on public administration, public financial management, and public service provision.

AMAN stressed the importance of a political will, democratic climate, and participation of civil society from across the spectrum. Civil society institutions will be strengthened and community members will be actively engaged in the fight against corruption. The society and target groups will be made aware of the risks, causes and impacts of corruption. AMAN also called for a concerted effort to ensure social audit, pursuit and reporting of corruption practices to relevant authorities. An assessment will cover how compliant government bodies are with prosecuting corrupt individuals and warding off impunity. Ensuring judicial independence, court decisions will be honoured and implemented without restriction. Dedicated corruption crimes courts will also be formed.