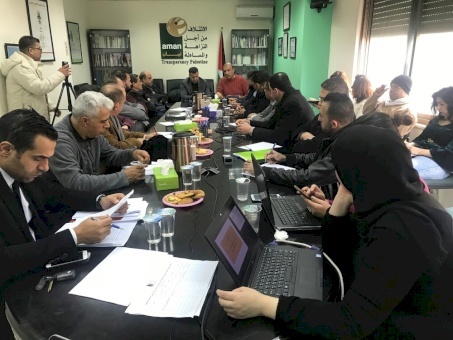 AMAN demands that a clearly defined legal framework for Customs Police functions be developed and supported with logistic, human and financial resources

Ramallah – The Coalition for Accountability and Integrity (AMAN) held a session to discuss its draft report on how effective and immune the integrity system is in the Customs Police operations. Highlighting the agency’s sensitive nature, AMAN stressed the important role of the Customs Police, which performs many economic, collection and oversight functions. These make the agency vulnerable to numerous challenges, requiring immunisation of Customs Police personnel and officials with the values of integrity and principles of transparency. Procedures and decision-making mechanisms also need to be clearly defined.

The report includes key recommendations made by AMAN. In addition to promoting operations, AMAN demanded that a regulatory framework be developed for the Customs Police. Importantly, quantitatively and qualitatively competent human resources will be appointed to carry out assigned functions. While they are on duty, Customs Police personnel will be immunised against any potential opportunities of corruption.

Effectiveness in light of understaffing and less than 1 percent budget allocation!

AMAN’s draft report recommended, inter alia, that a relevant regulation be enacted for the Customs Police. Clear provisions will identify tasks, powers, and operating procedures of the Customs Police, including in relation to the disposition of seized commodities. In addition to upgrading relevant legislation, clearly defined practical guides will be developed to govern the working relationship between the Customs Police and other line ministries and government bodies. The agency’s reporting relationship to the Ministry of Finance will be made clear. The Customs Police will be supported by qualified human resources, as well as financial and logistic capabilities, to enable task performance. According to AMAN’s draft report, the Customs Police is in need of specialised, experienced and competent personnel to help implement its functions. Although at least 4,500 members are needed, the agency only has 600 staff and a less than 1 percent budget allocation! In his review of the main sections of the report, Majdi Abu Zeid, Executive Director of AMAN, cast light on the complicated circumstances, under which the Customs Police operates. These are attributed to the specificity of the Palestinian context, including lack of sovereignty, and Israel’s control, over borders. It is, therefore, difficult to control access points into the Palestinian territory. On its social media sites, AMAN received many open-ended questions, inquiring whether Customs Police personnel were performing their duties, namely, protecting the local market against commodities that fail to meet health standards and settlement products. It was claimed that Customs Police personnel are blackmailed and pressured so that they condone and allow settlement products into the Palestinian market. Others claimed that pressure is placed on Customs Police personnel to turn a blind eye to and release seized commodities to some influential bodies. Some citizens argued that Customs Police staff sell seized items in the Palestinian territory as if they were new products.

AMAN’s draft report highlighted that the legal framework for the Customs Police is both inadequate and unclear. Many problems are caused by outmoded customs and tax legislation, some of which date back to the British Mandate and Jordanian rule over the West Bank. Weakness concerns the seizure and disposition of commodities.

In relation to the effectiveness and immunity of the integrity system with the Customs Police, AMAN’s draft report recommends that a code of professional conduct for Customs Police personnel be developed and issued, taking account of relevant international standards. Special instructions will be released on conflict of interest policies, handling gifts to Customs Police officials, and publication of financial data of senior officers on the agency’s websites. Informed instructions on reporting corruption practices and cases will also be issued and disseminated to Customs Police personnel. Staff will be urged to take the initiative and report any cases of corruption to Customs Police officials and to the Palestinian Anti-Corruption Commission. The agency will develop an official webpage to post all endorsed information on the agency’s operations, tasks, reports, and budget. The Computerised Central Government Complaints System will be connected to and used by the Customs Police. The Complaints Manual, which was already approved by the Council of Ministers, will also be put in place. The draft report also recommended a job rotation system to avoid building personal relationships with Customs Police staff or creating a fertile breeding ground for corruption practices. A system of incentives will also be approved, immunising Customs Police officers against any temptations or bribes while they perform their duties.

With regard to seizure and disposition procedures, AMAN’s draft report reiterates relevant recommendations of the State Audit and Administrative Control Bureau (SAACB). Warehouses will use duly organised receipt and issue vouchers. Proper warehouses will be provided, ensuring protection, arrangement, and labelling of seized commodities according to relevant cases. Disposal reports will be filled out in detail, including quantities, weights, and trademarks. Seized commodities will be detailed in receipt and delivery reports. For seized commodities, receipt vouchers will be made available and documented by relevant merchants, when they receive seized items. Finally, databases of seized commodities and irregularities will be protected and encoded, ensuring restricted access. These will be supervised by the respective IT Department.
Reflecting on internal and external control over the Customs Police operations, the SAACB representative said that the Bureau is in the process of compiling a new report and following up on the recommendations of AMAN’s draft report. He announced that the SAACB will initiate this procedure at the beginning of 2019.

On behalf of the Public Prosecution, Yasser Hammad admitted that regulations on the Customs Police were inadequate, but also emphasised the difficult conditions that affect the agency’s operations. Representing the Palestine Economic Policy Research Institute (MAS), Misyef Misyef explained that smuggling was on the rise, characterising the situation as “bleak”. Misyef indicated that the Public Treasury loses as much as NIS 300 million a year as a result of diesel smuggling, raising a question about negligence to put an end to this practice.