In a rowdy accountability session with the Ministry of National Economy and Ministry of Agriculture, Palestinian citizens spend over 87 percent of their average monthly salaries on food and farmers of the Jordan Valley are uttering hoarse cries of anger 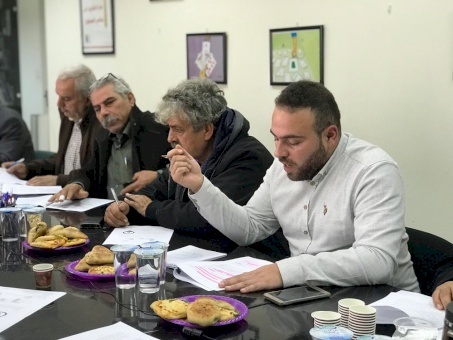 Ramallah – In partnership with the Palestinian Civil Society Coalition for Agricultural Institutions and Palestinian Consumer Protection Society (PCPS), the Coalition for Accountability and Integrity (AMAN) held a heated accountability session on the government policies and programmes in support to the agriculture sector, consumer protection, and price controls. The session was organised against the backdrop of the crisis in the Palestinian agricultural market, soaring vegetable prices, and low livestock prices due to smuggling, causing grave damage to farmers and overburdening Palestinian households who are already strained by the high cost of living. Highlighting consumer protection against rising commodity prices, the session also focused on protecting and empowering Palestinian farmers to meet local market needs. It also included a discussion of plans to provide commodities at affordable and fair prices. The prices of these commodities have been on the rise over the past weeks. However, the Ministry of Agriculture (MoA) and Ministry of National Economy (MoNE) boycotted the session and refused to be held to account.

As chair of the session, Majdi Abu Zeid, Executive Director of AMAN, disapproved of the dramatic rise in vegetable prices. No Palestinian household can do without vegetables, such as onions and tomatoes, as these are essential ingredients in consumers’ everyday food basket. Particularly in Area C under Israel’s control, poultry prices were in free fall after the market had been dumped by Israeli settlement products according to several sources, including the MoA and MoNE.

This reflects the government’s vision and prioritisation of support to the agriculture sector – a major production activity that is affected by Israel’s colonial policy. As a significant and critical national priority, the government should develop the agriculture sector to support Palestinians’ perseverance on their land. Government action should not be limited to a supervisory role.

Farmers coincided that clearly defined policies were not in place. Also lacking were relevant committees, which should be jointly established by the MoA and MoNE, to resolve common issues. In addition to standing by famers, the MoA should find a solution for the problems associated with agricultural insurance, medicines, and fertilisers, which farmers are forced to buy at prices higher than those in the Israeli market. The price of water is also exorbitant: farmers pay 30 percent of the water price for the compressed air in pipes.

Salah Haniyyah, PCPS Chair, highlighted the importance of this accountability session. Having denounced smuggling from the Israeli market, Haniyyah stressed the lack of a policy to control and regulate the agriculture sector. He also provided an overview of the challenges faced by both farmers and consumers.

AMAN reviewed some key indicators of the agriculture sector and the right to food in Palestine, spotlighting some shocking figures that require particular comparisons. In this context, the food basket cost is the highest in the region. According to a 2016 British study, the cost of staple foods for four individuals takes up as high as 87 percent of their average monthly salary. To this avail, the study provides a comparison between Palestine, Tunisia, Jordan, Egypt, and Britain. In the latter, food costs as little as 12.5 percent.
32 percent of Palestinian households are affected by food insecurity, including 47 percent in the Gaza Strip and 16 percent in the West Bank. Agriculture contributes 3.3 percent in the GDP. There is also a major gap between food exports and imports. Worthy of note is that the percentage of food insecurity is connected to poverty rates in Palestine. According to monthly consumption patterns by the end of 2017, the recorded incidence of individual poverty was 29.2 percent. The overall unemployment rate stood at 28.4 percent.

The MoA is responsible for control over imported agricultural products (operations at border crossings). Any agricultural (plant or animal) products should be entered by permission of the Directorate General of Marketing and Crossings. The MoNE Consumer Protection Department and MoA Market Control Department play an integrated role with other relevant agencies, including the Customs Police. AMAN has repeatedly called for increasing the number of staff in both departments so that they play their oversight role effectively. Compared to other commodities, the prices of poultry, red meat, fruits and vegetables are the most volatile during the year. Of all food basket items, these have the most bearing on Palestinian consumers. The agriculture sector is negatively impacted by weather conditions and a deficient quantity of meat is imported from the Israel side. Israel is the main exporter to the Palestinian territory.

According to many actors, including the PCPS, other contributing factors to increasing food prices is the lack of deterrent penalties against offending merchants, who raise the prices of food supplies. In addition absent price control mechanisms, official oversight bodies are inadequate.

On the other hand, significantly low prices sometimes have a devastating impact on producers and farmers. Poultry farmers suffer from recurrent setbacks as a result of declining prices. On several occasions, poultry farmers had to kill their chickens. In some areas, chicken price was a low as NIS 6 in spite of soaring food prices. Meantime, the prices of certain vegetables, including onions, jumped to NIS 12 in some areas. Price fluctuations have adversely affected Palestinian consumers and producers alike.