Al-Quds Declaration against Corruption: A closer step towards ending occupation and realizing the independent Palestinian state 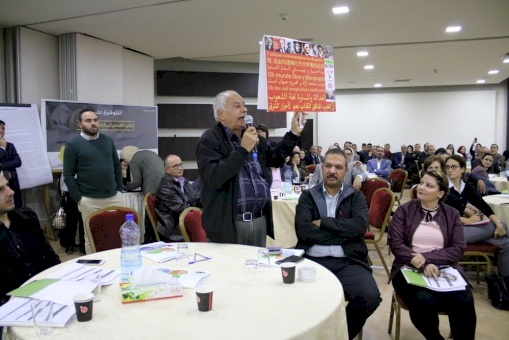 Calling upon the governmental, non-governmental and popular parties to develop a national inter-sectoral plan against corruption

Ramallah- Activists from the Palestinian factions, the national and Islamic forces, the parliament, networks, unions, coalitions and civil society organizations, together with the Independent Commission for Human Rights (ICHR) and several academics and independent personalities adopted the initiative of the Coalition for Accountability and Integrity Aman and demanded developing an Inter-sectoral national plan against corruption. They also signed “Al-Quds Declaration against Corruption” towards the end of the Conference entitled, “The National Plan against Corruption: Bridging the Gap between Reality and Needs”, held last Monday at the Palestinian Red Crescent Society (PRCS) in Al-Bireh.

Abdul Qader Husseini, Chairperson of Aman Board, opened the conference, explaining that it was the fruit of a collective effort, rather than one or few institutions. He added that the conference was a culmination of the will of all the members of the society to combat corruption first and demanded that the government takes serious steps towards fighting it. He referred to the findings of a 2018 opinion poll on the public perception towards corruption and means of fighting it, which revealed that the top three priorities to be addressed were corruption, the economic crises and the Israeli occupation. Eighty three % of the respondents believe that anti-corruption efforts in Palestine ae insufficient, while 67% believe that corruption increased during 2018 and 51% believe that corruption will further increase in 2019.

The signatories considered developing an inter-sectoral national plan against corruption an utmost priority, as a step closer towards liberation from occupation. This was a recommendation of the Report on Integrity and Fighting Corruption, which Aman has published annually during the past decade. The participants announced that they would immediately embark on a lobbying and advocacy campaign to achieve their goal, to build a sound national integrity system for the immunity of all parties against corruption.
The participants from the official, non-governmental and popular organizations unanimously agreed on the content of the declaration to consolidate dispersed and fragmented efforts in one integrated system that instills the principle of equal citizenship. They stressed the need to develop a clear and decisive stand against corruption, to restore the lost confidence and enhance the steadfastness of our people in both sides of the homeland, particularly in Jerusalem and among the citizens living in the so-called Area “C”.

They demanded partnership of all the groups of the society in developing, approving, implementing and monitoring comprehensive and complementary plans and strategies against corruption, so that they become comprehensive and participatory national inter-sectoral strategies. They explained that one specialized official party must not monopolize the national plan against corruption, which should not be designated solely to the Anti-Corruption Commission (ACC).  It lies at the core of the life of ordinary citizens, who stand at the forefront with all parties from the civil society, the private sector, the local government and the academia. The Council of Ministers (COM) should approve such a plan in accordance with other national plans to strengthen the role of ACC, which boycotted the conference despite repeated invitations to join.

The Declaration unanimously called for launching a war against corruption. It also called for national unity and for holding general Presidential and Legislative elections, which constitute the most important foundation for enhancing the steadfastness of the Palestinian people, ending occupation, building the independent state and maintaining the political struggle. They stressed the need for a firm political will and for enacting deterrent laws to preserve Palestinian public money and resources from the corrupt and spend money on items that fall within the national priorities.

The Declaration called for promptly amending the Anti-Corruption Law to conform to the UN Convention against Corruption (UNCAC), to enforce it in Gaza Strip and make it part of the reconciliation efforts that aim at unifying the governmental and judicial services in the West Bank and Gaza Strip.

The Declaration indicated that the national plan against corruption should incriminate and prosecute the corrupt persons and prevent impunity. It should prosecute the corrupt persons who embezzled public money and fled the country to recover stolen funds and assets. It should also raise awareness on prevention, alleviate corruption in the governmental, non-governmental and private sectors, address the causes of corruption, develop a public opinion against corruption and incorporate anti-corruption values in the binding executive policies, procedures and programs of all public institutions, in line with the National Policy Agenda: the Citizens First (2017-2022). The Policy Agenda (NPA) includes values of integrity and principles of transparency, and stresses the importance of accountability, the right of citizens to submit complaints, and the importance of following up such complaints seriously and responsibly. Moreover, NPA identifies the fifth national priority entitled “The Effective Government” and the ninth and tenth policies entitled “Strengthening Accountability and Transparency” and the “Effective, Efficient Public Financial Management”.

The signatories demanded enacting a whistleblower protection law or regulation, and announced establishing a committee to defend whistleblowers and witnesses by all possible means. They demanded issuing the “Access to Information Law” and the “National Archives Law”, which are essential for accessing the necessary information to control, hold accountable and prosecute suspects of corruption offenses at the competent authority.

The Declaration called for enabling journalists to perform their role in writing investigative reports without restraining or impeding their access to sources of information. They also called for enacting legislations that prevent conflict of interests and regulate the employment of civil servants in the private sector. They also called for activating the Public Procurement Regulation, the Financial Disclosure system and oversight procedures on parties’ finances and on financing election campaigns.

The Conference consisted of three sessions, 1- Combatting corruption within the framework of international conventions and practice, 2- The impact of corruption on human rights and social justice, and 3- The National Anti-Corruption Plan: Concept, practice and needs.

The presented papers covered topics including the national shadow reports for achieving the Sustainable Development Goals (SDGs), particularly Goal 16, which calls for empowered, effective and accountable institutions to realize the aspirations of people for a decent and stable living. The report unveiled the challenges that confront anti- corruption efforts, especially in the justice sector, undermining the independence of the Judiciary because of the intervention of the Executive. In Palestine, transparency is deteriorating, as the government conceals information, especially on contracts of basic services. The government also stopped publishing its decisions on its website and engaging the civil society representatives in the discussions of the General Budget. Furthermore, it has not published most relevant documents since 2017.

Regarding the compliance of the state of Palestine with UNCAC provisions of Chapters 2 on preventive measures and Chapter 5 on asset recovery, the report revealed that the state of Palestine did not adopt UNCAC in its national laws. It did not publish UNCAC in the Gazette, so that it becomes binding as required by the applicable legal framework, despite acceding and signing UNCAC in 2014. The report also pointed out the absence of any bilateral judicial cooperation agreements for asset recovery or extradition.

The report on 2018 National Integrity System study, which adopts a specific methodology, indicated that the Central Elections Committee (CEC) and the civil society received the highest scores. On the other hand, the Legislative Council (PLC) and the Executive received the lowest scores because of their poor role in combating corruption, because the dysfunctional PLC has not undertaken its control function over the government and public institutions.
Dr. Ammar Dweik, Director-General of ICHR, said that it is not possible to realize human rights as provided in the international instruments in all aspects of work of the official and unofficial institutions except through fighting all forms of corruption that impede such their realization. He added that many complaints that ICHR follows up include abuse and torture by the security services, but ICHE cannot compel the official parties to comply with its recommendations. He called for partnership with all actors in the civil society, so that each party plays its role in alleviating corruption in the Palestinian society.

Mahmoud Ziyadeh, of the Independent Unions Federation, spoke about the deprivation of the most vulnerable classes from social protection. He pointed out the thousands of cases at the courts, amid the absence of specialized labor courts. He shed the light on the laborers who receive less that the minimum wage, and who have not rights, vacations, weekends, annual leaves or end-of-service compensations.

Victor Alistar, The Executive Director of Transparency International, Romania, presented the Romanian experience in developing a national inter-sectoral plan against corruption, as an international model to follow.

Participation in this conference was wide to an unprecedented level. The participants commented about compulsory early retirement of young men, women and persons with disabilities; lack of job tenure amid monopoly, personalization and politicization in decision-making; double salaries, and the lack of socio-economic rights in Palestine. Some university students commented about corruption in scholarships, while others about suspected corruption in health services and aid for poor families. They criticized the current health insurance system, lack of independence of the Judiciary, employing the sons and daughters of influential personalities despite widespread unemployment, failing to enforce the minimum wage, and excluding the poorest and most vulnerable from social security.