AMAN holds a session to discuss a report on: Risk Premium in the Civil Service and Fairness of its Application 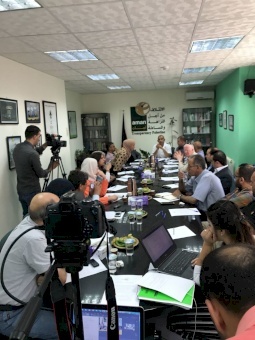 Ramallah –The Coalition for Accountability and Integrity (AMAN) held a session to discuss a draft report on The Current Context of Risk Premium in the Administrative and Financial Apparatus in Civil Service Positions. The report was compiled by the Civil Society Team for Enhancing Public Budget Transparency. Participants in the session recommended that a precise and clear definition of risk premium be provided. The role of committees established in accordance with decisions of the Council of Ministers needs to be reinvigorated with a view to establishing accurate controls and criteria for risk premium payment. Ensuring justice and non-discrimination, payment will be based the actual functions performed by civil servants. Risk premium will not be paid to civil servants in supervisory or administrative positions or when the reason for payment ceases to exist. Risk premium will be reviewed as some civil servants take on a greater proportion of the risk than the rates allocated to them. Finally, risk premium will be incorporated within the employment premium.

In his opening remarks, Mr. Majdi Abu Zeid, Executive Director of AMAN, raised the question: “Is risk premium paid to entitled civil servants fairly?” According to Abu Zeid, risk premium is one item that takes up a significant portion of public expenditures in the general budget. The fact that risk premium is paid without following applicable procedures and standards creates a fertile environment for waste of public funds and imposes a considerable financial burden on the pubic treasury.

In his presentation on the draft report, Abdul Rahim Taha, a researcher, reviewed the definition of risk premium as provided for by the Civil Service Law No. 4 of 1998. Risk premium is a monthly financial compensation, which is added to the basic salary of civil servants, in consideration of the expenses they incur in the context of performing their functions, making efforts or taking particular risks when undertaking their work. These risks may be health-related, environmental, weather-related, physical, mechanical, biological or chemical.

Risk premium is the subject of discretionary power of officials

Although they were requested to abandon their positions as a result of the internal Palestinian political divide, risk premiums continued to be paid to Gaza-based staff of the Ministry of Health (MoH), Palestinian Energy Authority and Ministry of Public Works and Housing. On the other hand, risk premium payments for civil servants at other line ministries and government bodies were suspended. Of particular note, the Council of Ministers responded to the demands trade unions under the pressure of protests organised by these unions.

According to the agreement signed by the Palestinian Medical Association, Health Professional Association and Council of Ministers, risk premium is paid to all MoH staff regardless of their job titles and positions. Totalling NIS 6,375.891 per month, risk premium is paid to 7,380 MoH staff members. On the other hand, risk premium has not been paid to similar health professionals at other institutions, including the Abu Raya Rehabilitation Centre and Ministry of Justice.

The audience concurred with the report and discussion that took place at the session. In his comment, GCP representative Abdullah Elayyan stressed the need for a new and contemporary civil service law. Like neighbouring countries, the law should legalise and set standards for the payment of risk premium. SAACB representative Samer Abu Qare’ proposed that recommendations of the report be aligned with a 2016 SAACB report, which highlights the main problems associated with risk premium.