In a debate organized by AMAN , State Institution's consensus on the ratification of the Palestinian Archive Law 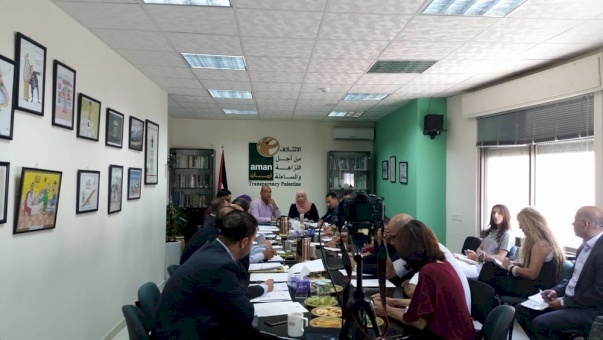 Ramallah – In a discussion on the report issued by the State Audit and Administrative Control Bureau in March on the archiving system in the Palestinian state institutions. The Coalition for Integrity and accountability seconded the recommendations submitted by SAACB on the problems relative to the management and organization of the archiving processes and access to information in public institutions. AMAN also called for classification of information, identification of public and other records to enable citizens access to information, enhance transparency and combat corruption. It reiterated that the National Archive Law was extensively discussed, and it received consensus of the civil society and other specialized stakeholders. It needs to be enacted together with the Law on the Right of Access to Information to complement the system of archiving and access.

The session was attended by representatives of SAACB, Palestinian Archive Institute, line ministries, Presidency Office, Palestinian Monetary Authority, Palestinian Central Bureau of Statistics, Palestinian Monetary Fund, Land Authority and teachers and researchers from Palestinian universities in addition to the Independent Commission on Human Rights, and civil and human rights organizations. Participants were unanimous on the importance of archiving and documentation to preserve history and build on previous experiences. They reiterated its importance to consolidate national integrity in state institutions.

Abu Zaid referred to the campaign launched last June by AMAN on the right to access to information #information_is_a_right and reiterated his full support to the law on access to information. He alluded to the recommendations submitted frequently to the Ministerial Council on the necessity to issue instructions to all state institutions to start classifying public records and rendering them accessible to citizens, even prior to the enactment of the Law.

Mr. Majdi Mitani, from SAACB, commented on the status of the archive and described it disastrous. He added that the archives in most ministries are lacking, not to mention that files are either in staircase or in neglected rooms in many institutions.

Mr. Fawaz Salameh, Director General of the National Archive, attributed the archiving problems to lack of serious management and absence of a national archive law or instructions to guide different state institutions to prepare manuals and procedures for maintenance of the national archives. He also presented the challenges facing the national archive institution, including lack of legal status, and henceforth its recommendations are not binding. Furthermore, some public institutions dispose of documents without referring to the national archive not to mention waste of public funds in purchase of software that does not meet the needs.

Administrative Records Do Not Help PCBS

Mr. Haitham Zeidan, Director of Dissemination and Documentation at the Palestinian Central Bureau of Statistics, explained problems related to different definitions and norms of concepts. The definition of the same term in the ministry differs from that used by the municipality. He reiterated on the importance of administrative records, which should connect PCBS to ministries. He also mentioned the lack of legal framework and that some information is not delivered to start with, which creates a huge gap in sources of data in Palestine.

Researcher Sumoud Al-Barghouthi presented SAACB report on the archiving system in the institutions of the State of Palestine, which covered 23 public institutions. The key findings included: absence of legislation to regulate government archiving, agencies do not apply any organized archiving mechanisms, while some institutions do not keep part of their documents while most institutions do not audit their archiving codes and classification. Furthermore, staff responsible for the filing and documentation is not sufficiently qualified and lacks appropriate workplaces and documents-keeping facilities. The report mentioned that 915 of government institutions do not use binders to preserve permanent documents and files from decay. On the other hand, 87% of them do not apply the necessary procedures to dispose of paper documents after their electronic archiving.

She also stated that SAACB doubts loss of documents and files (loss, decay, disposal, stealing, burning or alteration), raising awareness of a number of valuable financial and legal historical documents, which entail rights for individuals and institutions. She also referred to the difficult access to information, data, documents and statistics needed by different stakeholders. This consequently affects decision making and impedes speedy access to data and documents. Furthermore, archiving procedures in many government organizations are weak and inefficient because of the lack of any law, regulations or instructions to govern the process and regulate keeping, classification, and codification of documents.

SAACB concluded weak credibility of e-archived data in some institutions because of absence of controls on access of archived data, which are left open to alteration and deletion. This entails potential loss of administrative and financial rights of individuals and institutions because of non-systemic file-keeping and loss of may documents without any substitute or alternative.