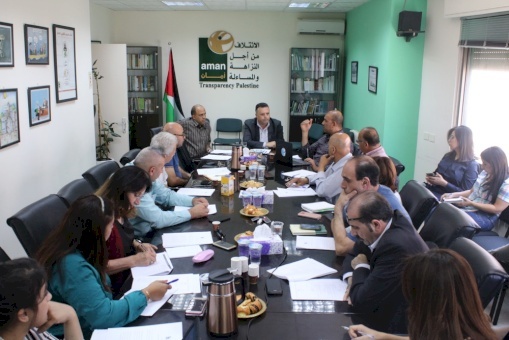 Ramallah – The Coalition for Integrity and Accountability – AMAN, in partnership with the Journalists Syndicate and a number of human rights organizations called for mobilization and intensive community lobbying to support the promulgation of the Law on the Right of Access to Information, which has been submitted to the Ministerial Council. The meeting called for reviving the discussion on the final draft of the law, which has been halted for four years. Participants – each in his/her position – were unanimous about their contribution to the #Right_to_information Campaign launched by AMAN last June to serious measures at all levels. Participants also agreed on requesting a meeting with the Prime Minister, Minister of Justice and other influential parties to accelerate the promulgation of the law.

Free access to information is the corner stone in building mutual trust between citizens and state’s institutions; it fosters the value of integrity and transparency not to mention that it is a key requirement in the United Nations Convention Against Corruption (UNCAC) since it affects essentially all sectors. Access to information is particularly important for media outlets, which lead the effort and which are mostly affected by the law. The non-enactment of the law affects the daily living of citizens starting with making public records accessible, ratification of the public budget as well as the effect on human rights and services in the community and how they impact marginalized groups like women and children. Furthermore, withholding information triggers rumors, false news and circulation of incorrect information.

Majdi Abu Zeid opened the meeting by bringing up the delayed enactment of the law in spite of promises by the government since many years. He alluded to the lack of dissemination of information on the websites of ministries and the Secretariat General of the Cabinet. Such pages publish official holidays and working hours and omit the latest developments and activities of the government and the resolutions to become effective in Palestine.

Abu Zeid reiterated that enforcement of the law is equally important as the ratification and enforcement of the National Archives Law. He stated that the Ministerial Council needs to issue instructions to all governmental and nongovernmental organizations to start classifying data and make them transparently accessible to citizens.

Attempts to fill in the legislative gap

Nasser Abu Baker, Chair of PJS, commended the partnership with civil society organizations and intensified efforts to lobby for the ratification of the law in an attempt to fill in the legislative gap with the paralysis of the Palestinian Legislative Council. Abu Baker stated that the government is making serious efforts to ratify the law since it reflects the level of transparency in Palestine at regional and international levels. On the other hand, AMAN’s Legal Advisor, Attorney Bilal Al-Barghouthi, presented AMAN’s stance of the Law and explained that the current draft is the culmination of 14 years of national efforts, which began in 2003. Al-Barghouthi also referred to the legislative drafting lacuna in some clauses covering the exceptions and how exclusive they can be; the current drafting expands such exceptions that they become greater than the rule and opens room for undesirable extensions, especially in matters related to state’s national security. Loose drafting and long delay for application of the access to information (up to nine days), which may render the information – when received – useless, especially for journalists.