Serious allegations of Referrals to Retirement on the Basis of Trade-Union Activities and Personal Disputes, AMAN Coalition Holds a Meeting with a Number of Complainants against Early Retirement and Calls on the Government to form a Grievance Committee to 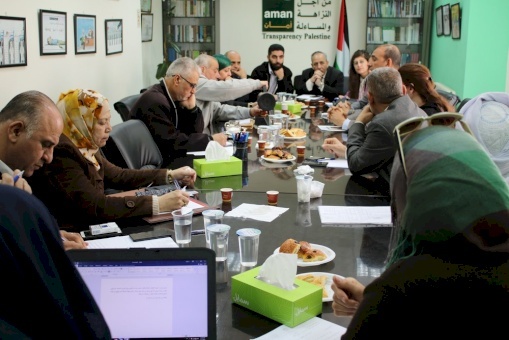 The Participants in the meeting held by AMAN Coalition to discuss a number of cases referred to early retirement in violation of the provisions of law, emphasized that the Decree Law shall not be abused arbitrarily against employees due to their trade-union movement or due to reporting on corruption against their officials or due to personal reasons and disputes with their officials.

The meeting was held after receiving a number of cases that asked for legal advice. Some of these cases proved that early retirement was used without the request, approval or knowledge of the employee and even without being informed about the retirement decision itself until the passage of twenty days from its issuance. Some of them have not handed their retirement decision up to this moment and they were referred to retirement in way degrading of human dignity and the years of service in public office. Others claimed that referring them to retirement was to settle personal disputes by some officials, and they supported their claim with evidence.

The Executive Director of AMAN Coalition, Majdi Abu Zaid, stressed the need for developing clear criteria upon which employees are referred to early retirement to ensure that such retirement is not used in violation of the law. He pointed out that the civil society organizations and the Independent Commission for Human Rights are coordinating their efforts to follow up this issue in terms of reckoning the number of victims,  the reasons behind their referral to retirement, holding meetings, conferences, rallies and press activities as well as starting to prepare filing cases at the Palestinian courts. Abu Zaid has drawn the attention of the complainants to file the cases against the arbitrary retirement decision within 20 days from receiving it.
The meeting was attended by a big number of employees who complained against the decision representing the Ministries of Health, Education, Public Works, Encouragement of Investment, Waqf and Endowment, Tourism and Archeology, whose reasons of early retirement were based on trade-union activities, submitting complaints against their officials or reporting on corruption cases against them or personal reasons and disputes with their officials.
Following the meeting, AMAN Coalition sent a letter to Prime Minister Dr. Rami Al-Hamdullah, on the injustice affected a number of public servants who were referred to early retirement arbitrarily. The letter of the Coalition asked the Council of Ministers to form a grievance committee to consider these cases, and the committee shall include independent bodies, such as the Independent Commission for Human Rights, in its membership.
In its letter, the coalition has also pointed out that the statements of the complainants presented at the meeting held today by AMAN Coalition include the performance evaluations of these employees, which was more than good during the previous years, which negates the idea of “public interest” pretexted for their retirement. Some of the employees stated that they have due checks and housing loans that they cannot pay as a result of their referral to early retirement, which may result in their imprisonment and degradation of their dignity and the rights of their families and children.