Out of 72 Indicators, 44 Failed ... and the Integrity System in Palestine Remains Stalled.. AMAN Coalition Held a Press Conference to Announce the Results of the Palestinian Integrity System Index of 2017 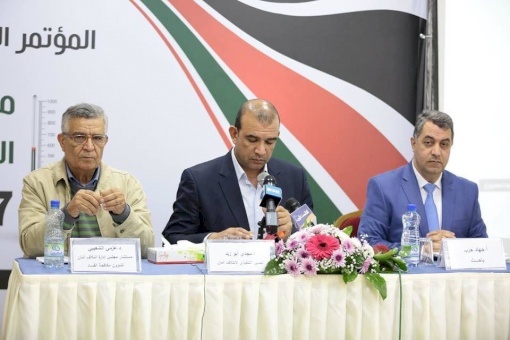 The year 2017 has witnessed positive developments in terms of promoting integrity and combating corruption. However, these developments did not reach the level to constitute a comprehensive national policy and governmental plan to combat corruption, which resulted in serious and substantial challenges facing the functioning of many public institutions. The results of the Integrity Index of 2017 indicated that the integrity system in Palestine remains stalled at 500 scores. The total score was 552 out of 1000, representing 55%. This result generally means that the integrity system in Palestine is bad or weak. Moreover, there was no dramatic change in 2017 in the corruption prevention system and efforts to combat corruption. This situation has been negatively affected by the lack of respect for the rule of law and its provisions rather than being affected by the weakness or lack of legislations. This requires setting urgent and pressing tasks on the Palestinian agenda to meet the challenges and fill the gaps in the integrity system.

Those findings were announced during a press conference held by the Coalition for Integrity and Accountability (AMAN) to launch the results of the Integrity System Index in Palestine for 2017. This event has coincided with the launching of the Global Corruption Perception Index (CPI) for 2017 by Transparency International Organization in which the State of Palestine was not listed for the eleventh consecutive year due to the lack of sources of information that are internationally adopted as a prerequisite to join the index.

The conference, which was attended by journalists, representatives of governmental institutions, civil society organizations, private sector, academics and researchers was held to announce the detailed results of the Index for the year 2017. AMAN’s Executive Director Majdi Abu Zaid explained that the Coalition's motivation to prepare and publish this Index and pay attention to develop it stems from the Coalition’s interest in keeping pace with global developments in the field of combating and measuring corruption as well as applying the outcomes to the Palestinian reality through the localization of global indicators and their adaptation to meet the Palestinian reality. Abu Zaid noted that the information contained in the Index are limited to the West Bank without Gaza because of the political division between the two parts of the country, which made it impossible to technically collect the information and reflect them in unified results.

13 Indicators Scored Zero, and 31 did not Reach the Pass Average

Researcher Jihad Harb presented the detailed results of the Index, pointing out that these results of 2017 have recorded 13 indicators with zero score out of 72 indicators, including: citizens’ lack of belief in the ability to report to the Anti-Corruption Commission on suspected corruption cases, lack of advertisement on special and senior positions, absence of a law on franchise and prevention of monopoly and not holding the government accountable for the way it spends the budget. The results showed the failure of 31 indicators out of 72 as they got a score of less than 500 in the Index, including: media self-censorship, lack of access to information, the people’s belief that there is corruption in the judiciary, lack of control on gifts and hospitality and lack of reporting by the non-ministerial public institutions to their reference bodies. These results showed that about half of the integrity system indicators require serious, intensive and continuous work that must be done by the Palestinian Authority and the official, community and private institutions working in the field of integrity and combating corruption to reduce this alarming percentage of indicators.

The good scores were in favor of seven indicators, including: the entities that subject to the Financial and Administrative Audit Bureau have responded to its requests, the percentage of cases referred by the Public Prosecution to the Judiciary, commitment of relevant people to submit financial disclosure statements, disclosure of financial statements by public shareholding institutions, effectiveness of the governmental complaints system, in addition to the existence of the Judicial Inspection Authority as well as the submission of reports by international organizations on their work to the competent authorities.

With regard to the excellent indicators, they reached 21. An example of these indicators is: the existence of an anti-corruption institution that publishes an annual report represented by the Palestinian Anti-Corruption Commission. However, this indicator does not measure the role the Commission plays in combating corruption, the quality of its report, its seriousness and the depth of its content. This also applies to the rest of the other excellent indicators in the Index, such as tendering for public works and procurements, which received an excellent score but without considering the existence of exceptions in tenders, non-activation of the General Procurement Policy Board and other issues when it measured this indicator.

For his part, Dr. Azmi Shuaibi Advisor of AMANs Board of Directors for anti- corruption affairs stated that the Index results show the lack of serious political will to make a serious breakthrough in terms of strengthening the integrity system and combating corruption in Palestine. Although there are efforts being paid in this regard, but these efforts did not produce the required results. The results also show that there are some forms of corruption since years despite the repeated promises to resolve them, including appointments in senior positions, imposing restrictions on media freedoms and access to information, in addition to the absence of oversight by the major representative represented by the Legislative Council, which is not functioning since more than 10 years.

It is worthy to note that the Index is issued for the seventh consecutive time and it serves as a tool to measure the reality and immunity of state institutions in combating corruption as well as a regular description of the integrity system reality in Palestine in terms of its components that include the governmental or public, civil and private sectors. This description has used seventy two indicators developed by AMAN Coalition based on the provisions of the United Nations Convention against Corruption “UNCAC” and a number of indicators used by Transparency International on integrity, transparency and accountability and based on information collected over a year.