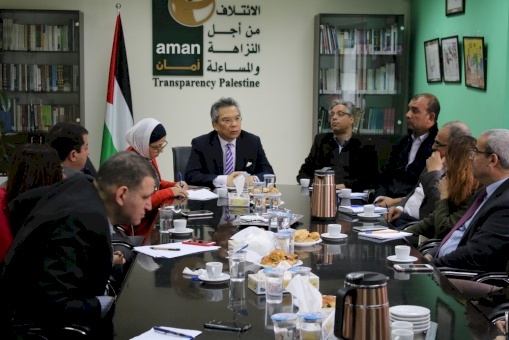 “It is important for the citizens to fight corruption and monitor all corrupt parties” Mr. Daniel Li Chak

Mr. Li shared his county’s experience in the 1960’s in which the society was drowning in briberies, as serving “tips” to governmental employees was a part of Hong Kong’s traditions and customs and not a corrupt act.

Such way of living was started by four senior police officers, who had full control over the country’s criminal investigation, which led to the emergence of corruption opportunities such as illegal gambling, and the usage of dangerous drugs during that period, prompting many citizens in demanding for a better society and protesting such acts, raising their voices to the government with the help of many media activists.
The Independent Commission Against Corruption was established February 1974, to help put an end to corruption in Hong Kong. There was no certainty about the citizens trust in the commission, and it was expected that the commission would focus on the “small fish in the sea and turn a blind eye to whales”, therefore the commission acted to gain the citizens trust by heading the front pages on the newspapers with successful stories in combating corruption.

In November 1977, the successful movement in combating corruption went down the hill due to attacks on the commission by armed police officers, turning into a political crisis that shook the colonial British Government at that time, calling for international experts in anti-corruption to step in and teach their experiences in changing their local societies. Mr.Daniel Li emphasized that the independence of the judiciary, and the media were the most important tools in making a successful approach in the fight against corruption.

In response to questions posed by Dr.Nabil Qasis, General Manager at MAS institution, over the difficulty in filing cases of corruption, Mr. Li has emphasized that such act was very difficult due to the lack of compelling evidences against accused individuals in performing corruption acts. Moreover, in reponse to the question on the length of cases to be resolved by the court, Mr.Li pointed out that in the past years, such cases needed about 3 to 12 months to be resolved, but as for now, some cases may need from 10 to 12 years due to the complexity of the trial procedures and the difficulty of detecting acts of corruption.

Moreover, Mr. Li emphasized the need to cooperate with various tax departments to monitor illegal funds, to make sure that the defendants do not travel abroad, pointing out that some of them may resort to negotiating to reduce the sentences issued against them in exchange for a large amount of the looted funds.