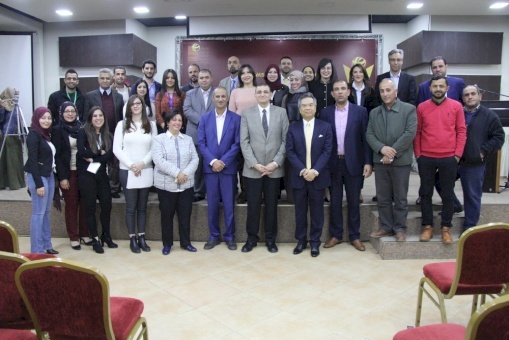 The Coalition for Accountability and Integrity AMAN held its Twelfth National Integrity Festival in celebration of the World Anti-Corruption Day on December 9th, awarding the “2017 Knights of Integrity” in the West Bank and the Gaza Strip. Many citizens, officials, representatives of governmental and non-governmental organizations, partners, civil society organizations, international agencies, and media have attended the festival.

In his opening remarks, Mr. Abdel Qader Husseini, Chairperson of AMAN Board of Directors, commented on the political circumstances due to President of the United State’s speech, especially the circumstances in Jerusalem, emphasizing the resistance of the citizens in Jerusalem and the need to support them in current circumstances.

Moreover, Mr. Abdel Qader pointed out that the growing interest in fighting corruption in Palestine, by joining the United Nations Convention Against Corruption three years ago, preparing the National Policy Agenda for the years 2017-2020 by adding policies to enhance transparency and accountability public financial management, and the efforts of the State Audit & Administrative Control Bureau, and the Anti-Corruption Commission, asserting that such efforts will be worthless in the absence of a comprehensive national plan developed by all Palestinian officials, and civil parties.

Guest speaker, Mr.Daniel Li, Deputy Commissioner and a Former Head of Operations of the Independent Commission against corruption in Hong Kong, shared his country’s experience in the fight against corruption. He is currently the vice-chairman of the International Academic Advisory Board as well as visiting lecturer of the International Anti-Corruption Academy (IACA) in Vienna.
Mr. Li focused on the stages of combating corruption and challenges faced by the anti-corruption commission in Hong Kong, asserting that corruption leads to corruption, and the need to raise awareness of the society to take measurements against all developing corruption issues.
Moreover, Mr.Li emphasized that success in enhancing transparency, integrity and fighting corruption depends on committing to serve the public and national interest, in addition to the international interest mentioned in the United Nations Conventions Against Corruption.
Mr. Osama Azzam, Chairperson of RAHSEED’s Board of Directors Amman, spoke over AMAN’s experience in combating corruption, emphasizing that corruption is the route to damage in Arab societies, as well as sharing the challenges faced by RASHEED Organization since 2013 in gaining the trust of both the citizens and the government in Jordan.

Mr. Isam Younis, member of AMAN’s Board of Directors and Representative of the Jury Commission for the year 2017, spoke about the adopted mechanism by AMAN in selecting the winners for each year, which is based on a public transparent process implemented by many specialized individuals to review and monitor all applications to be eligible for the win for all three sectors:  Public Sector, best research and the Media Sector to encourage citizens to be a part in the fight against corruption.

The winner of the Public-Sector Integrity Award was Maher Hussein.

The Festival included short films about the winners of the Integrity awards. The winner of the Public Sector was Mr. Maher Hussein, who was able to return more than 800,000 NIS stolen over the years by a staff member whom added a list of names of his relatives to the salary from the treasury of the Palestine Liberation Organization in Ramallah.

Both Drs. Hasan Abu Nasser and Tariq Mufleh, presented recommendations regarding the renewal of new employees in all official governments in the Gaza Strip.

The winner Mohammad Abu Qamar submitted an issue regarding criminal acts such as drug dealing and the use of weapons in Gaza suburbs.
Shaima Marzouq, the second winner for the best research have submitted an investigation over an archeological site in Gaza which had a confirmation documents by the Ministry of Antiquities over the 5,000-year-old site to be destructed and turned to apartment blocks instead.
Furthermore, AMAN has granted certificates of appreciation to Ahla FM, Ajyal Radio, Raya FM, 24FM, Quds station, and Sawt Al Shaab station, for the efforts in enhancing the social accountability in their programs on the radio and as a partner in the fight against corruption, clarifying that during the next year, a financial award will be given to the best accountability program on the radio stations.
This annual award aims at motivating different groups to act against corruption and the corrupt and to prevent their impunity. It also aims at encouraging them to shoulder their responsibilities and to report corruption as witnesses or as victims, since reporting corruption is a patriotic heroic act and not snitching.