Anti-corruption International Day.. AMAN Coalition Calls on the Government to reconsider is position towards Transparency Convention 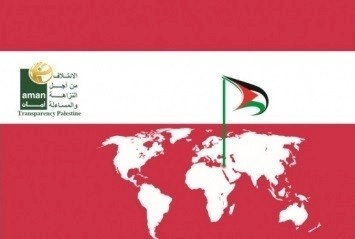 In the context of AMAN’s and Transparency International efforts to enhance combating corruption and civil society engagement in the Palestinian society, the Coalition for Accountability and Integrity AMAN demands the Palestinian government and all official parties to sign the transparency convention, which is signed by Transparency International and the Civil Society Coalition of the United Nations Convention against corruption, including many principles which should be adopted by the government such as publishing domestic reviews, final reports, and engaging civil society representatives to participate in discussions after reviewing all documents.

The government's response was based on the opinion of the Palestinian Anti-Corruption Commission, which refused to sign the convention because it is not binding on the countries that are parties to the UN Convention against Corruption.

Mr. Majdi Abu Zaid, Executive Director to AMAN Coalition, emphasized the need to sign such convention is important to enhance transparency, and the efforts made in combating corruption, especially in the absence of the Palestinian Law on the right to access information, which enhances the values of integrity and transparency in the public managing, pointing out that this convention was adopted by many countries in the world, the latest of which was Tunisia, in addition to the Lebanese Minister of Justice.

It is important to adopt such convention for the Palestinian Government to make contributions in building constructive partnerships with the Palestinian Civil Society Organizations, moreover, it will help increase the quality and effectiveness of reviewing the UN Convention against corruption implementation in Palestine, and strengthen efforts at national level.

Mr. Majdi Abu Zaid called on the Palestinian government to reconsider its decision in rejecting the signing of the convention, with the need to allow civil society institutions to contribute to the report of the next review of the Palestinian government and to not be limited to the official parties and a number of academic experts selected by the Anti-Corruption Commission, according to the National Policy Agenda 2017-2020 the Palestinian government stressed the importance of involving all efforts to promote the state of Palestine and enable its position in international forums, in addition to policies to enhance transparency and accountability in the management of public affairs and finance.