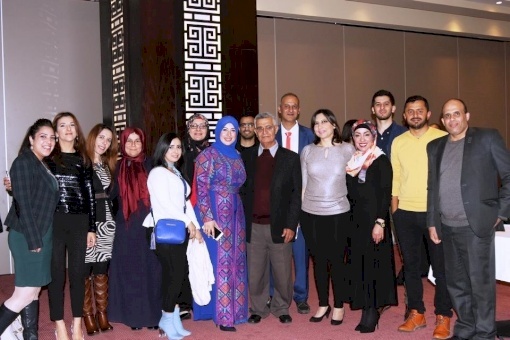 In an award ceremony held in Berlin, Germany and through a video conference, the Coalition for Accountability and Integrity AMAN received the 18th Ibn Rushd Award for the year 2017.

In Ibn Rushd fund press release, AMAN stands out among other organizations due to its 17 years of operation, whereas numerous cases of corruption were brought to the attention of the public, across a spectrum of businesses and institutions, including energy, telecommunication, healthcare, social services, traffic management and infrastructure. Moreover, AMAN issues objective impartial reports; forming civil society institutions aims to civil monitoring and support against corruption.

The Middle East Regional Advisor to Transparency International, Kenda Hattar presented the award to the reality of corruption in the Arab region based on the results of the Corruption Perceptions Index, which viewed various Arab countries on this indicator.
Regarding Palestine, Hattar pointed out that corruption is heavily influenced by the occupation, as well as the absence of an appropriate system of governance and institutions, the weakness of elected authorities in return for the strength of civil society organizations in Palestine and their historical ability to fill gaps.

Hattar praised the role played by the AMAN Coalition on the regional and international level. She pointed out that the coalition is the main organization that leads the studies of the local integrity system in seven Libyan municipalities. It also produces regional reports on political corruption in the Middle East and North Africa, As well as membership in prominent regional and international networks and coalitions such as ACINET and the United Nations Convention Against Corruption.

Executive Director of AMAN coalition Majdi Abu Zaid, stated that despite the improvement in the subject of raising awareness of the Palestinian society against corruption and its forms; AMAN coalition still believes that efforts to combat corruption are still scattered due to the absence of a unified national plan to combat corruption, it is agreed on how to distribute the efforts and assume responsibilities, especially with regard to the official service, regulatory and monitoring institutions.

Moreover, Mr. Majdi emphasized that the exceptional Palestinian circumstances required a different role and a strategic change in the attitudes and mechanisms of AMAN’s work into a watchdog role without abandoning AMAN’s role in proposing legislation and recommendations, influencing policies, raising awareness, influencing culture, considering that the coalition has the right experience and knowledge to help fulfill this goal.
The Ibn Rushd Award for Freedom of Thought is an award given annually by the Ibn Rushd Foundation to organizations or individuals who have made important contributions to the freedom of thought in the Arab world and thus to the values and objectives of the Foundation. Women's rights, human rights, parliamentary work, committed literature, religious reform (Islamic), enlightenment, economic development, internet blogs, political music, Islam and civil society, and fighting corruption.