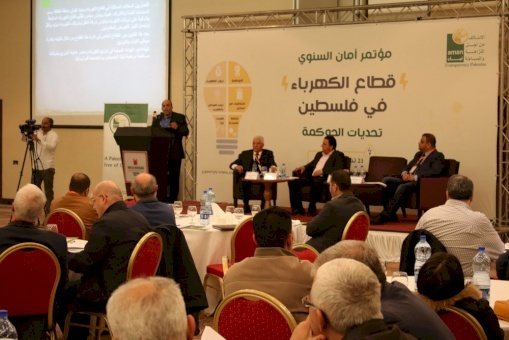 The Coalition for Accountability and Integrity AMAN, held its Annual Electricity Conference in Palestine, in which the participants recommended that the government must adopt an assertive policy towards uncommitted local bodies, electricity distribution companies, and water companies, to guarantee that the debts do no accumulate, and deducted from the Palestinian Citizens funds under the title of net Lending, in addition to end the problem of the camps debts, by producing electricity from alternative sources to stop relying on Israeli resources to obtain electricity, emphasizing the importance in which the government must not accept negotiations with the Israeli side by considering them as a consumer, and to negotiate a price which will reduce tariffs on citizens, and to not accept any conditions which prevent the Authority from providing electricity to citizens.

The 2017 Electricity conference also aims to activate monitoring, and accountability over electricity networks to adopt legal measurements against violators, in addition to a clear policy to adopt a general concession law whereas, the energy sector integrated in the National Policy Agenda, as well as enabling the Palestinian Electricity Regulatory Council to ensure its financial and administrative independency and commitment to the principles of transparency. Moreover, the need to activate the role of the Palestinian Energy and Natural Resources Authority, and the role of the Palestinian Electricity Transmission, as well as increasing the amount of electricity in the sector, and repairing the networks infrastructure in parallel with planning to activate the gas power plant.

On the other hand, the participants emphasized the need to limit obstacles regarding investing in renewable energy, and to set a comprehensive national plan to identify suitable areas to generate energy, as well as reviewing the electricity’s structure to ensure the consumers right and to enhance the culture of responsibility and accountability, and activating the role of local bodies in addition to establishing a 5- year strategic plan to set the development of the electrical networks right to be able to handle delivering renewable energy systems.

In his opening statement, Mr. Abed Al-Qader Husseini, Chairperson of AMAN’s Board of Directors, stated that the 2017 Annual Electricity Conference targets the importance of the electrical power sector as it is one of the vital sectors which needs a comprehensive national plan to ensure providing services to the citizen and improve the quality, in line with the National Policy Agenda to improve the quality of services, and establish a government concerned with the citizens, enhance transparency and accountability, and the efficiency and effectiveness of public money management. 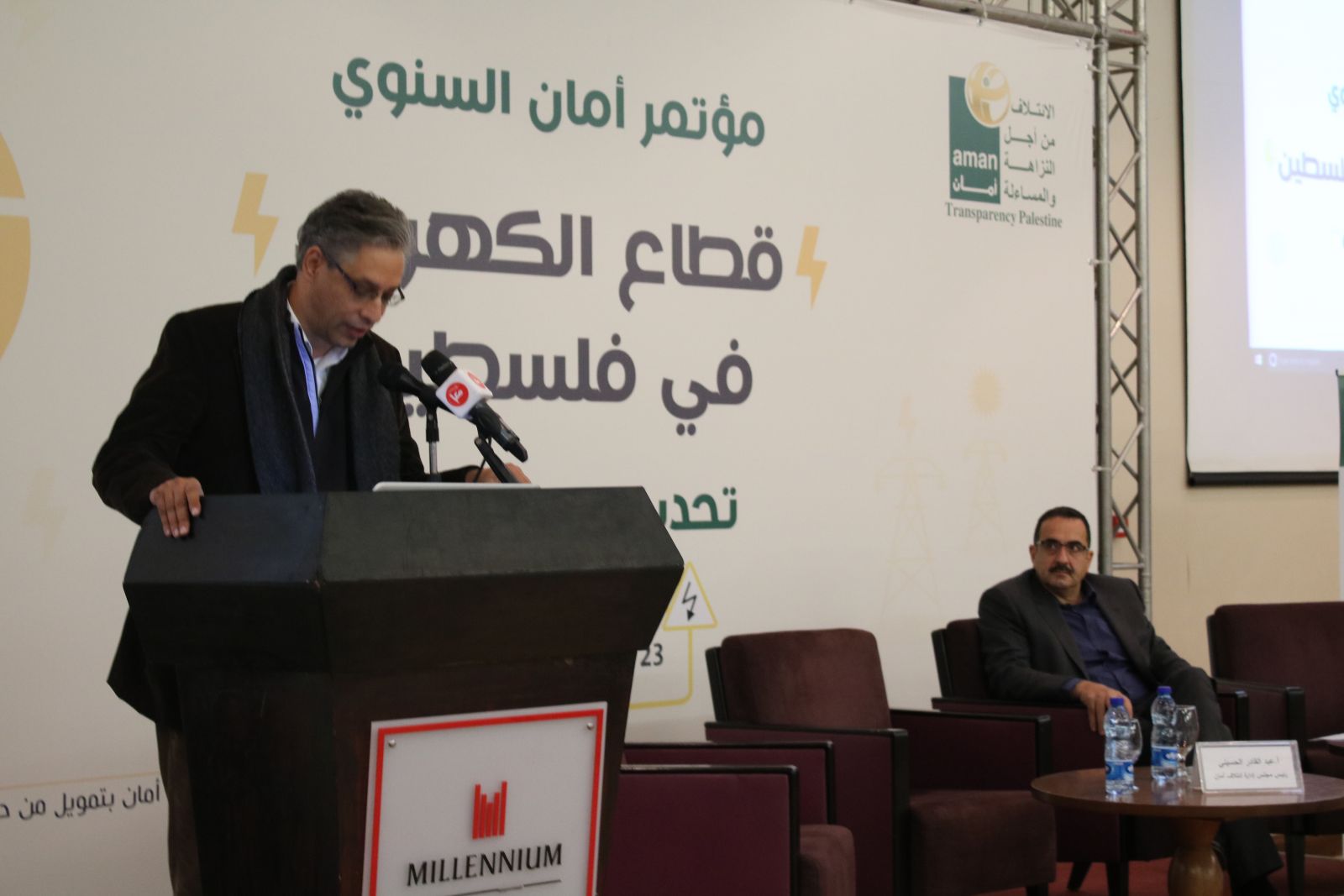 Mr. Thafer Melhem, Acting President of the Palestinian Energy and Natural Resources Authority, mentioned the efforts made by the Energy Authority and the Palestinian governance to overcome all legal and technical obstacles to guarantee the continuing and the development of services, most important of which is the strategic energy plan for the years 2017- 2022, in addition to many legislations and legal laws to enhance the use of renewal energy, in transforming the energy sector into a productive sector as an investment to the country.
Mr. Melhem emphasized that the Palestinian Energy and Natural Resources Authority intends to sue the Israeli Electric Company because of its non-compliance with the agreement with the Authority in 2016 regarding the payment of debts of Palestinians, and continuing to deduct electricity bills from the clearing funds collected on behalf of the authority. 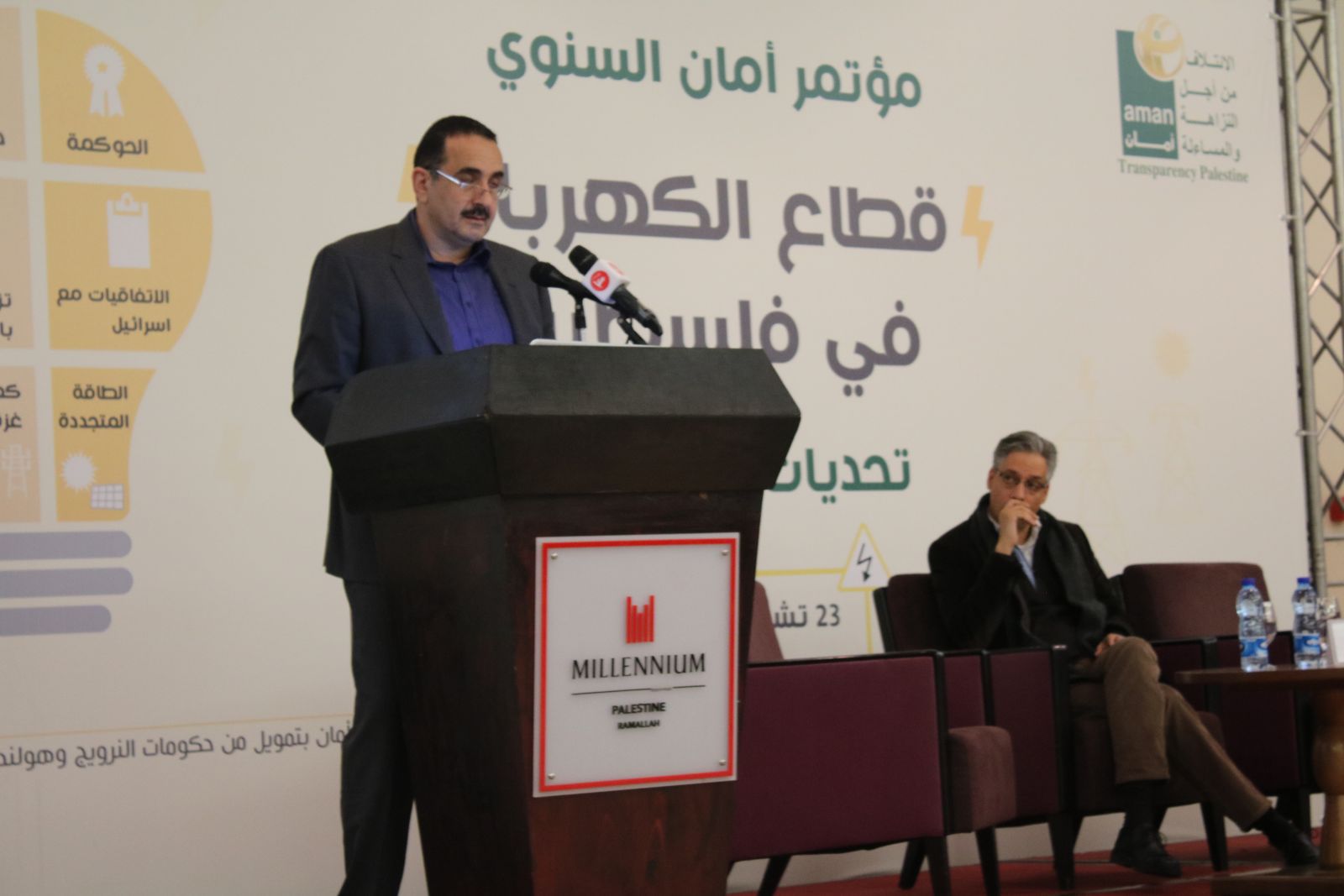 Mr. Bilal Barghouthi, Researcher and Legal Consultant to AMAN, also pointed out many challenges in the Electricity Sector, due to the delay in publishing the Palestinian Electricity Law, leaving the administration of the electricity sector in the hand of the Energy Authority only, which resulted in the lack of a monitor body over the sector, in addition to poor services, and obvious variation in the prices of electricity due to the absence of a unified tariff for prices. Moreover, Mr. Barghouthi pointed out the ineffective role of the Energy Authority in Gaza effecting the citizens in a negative way, clarifying the need to empower the regulation council to perform its legal role, in addition to clarifying the relationship between the Energy Authority and the Regulation Council. 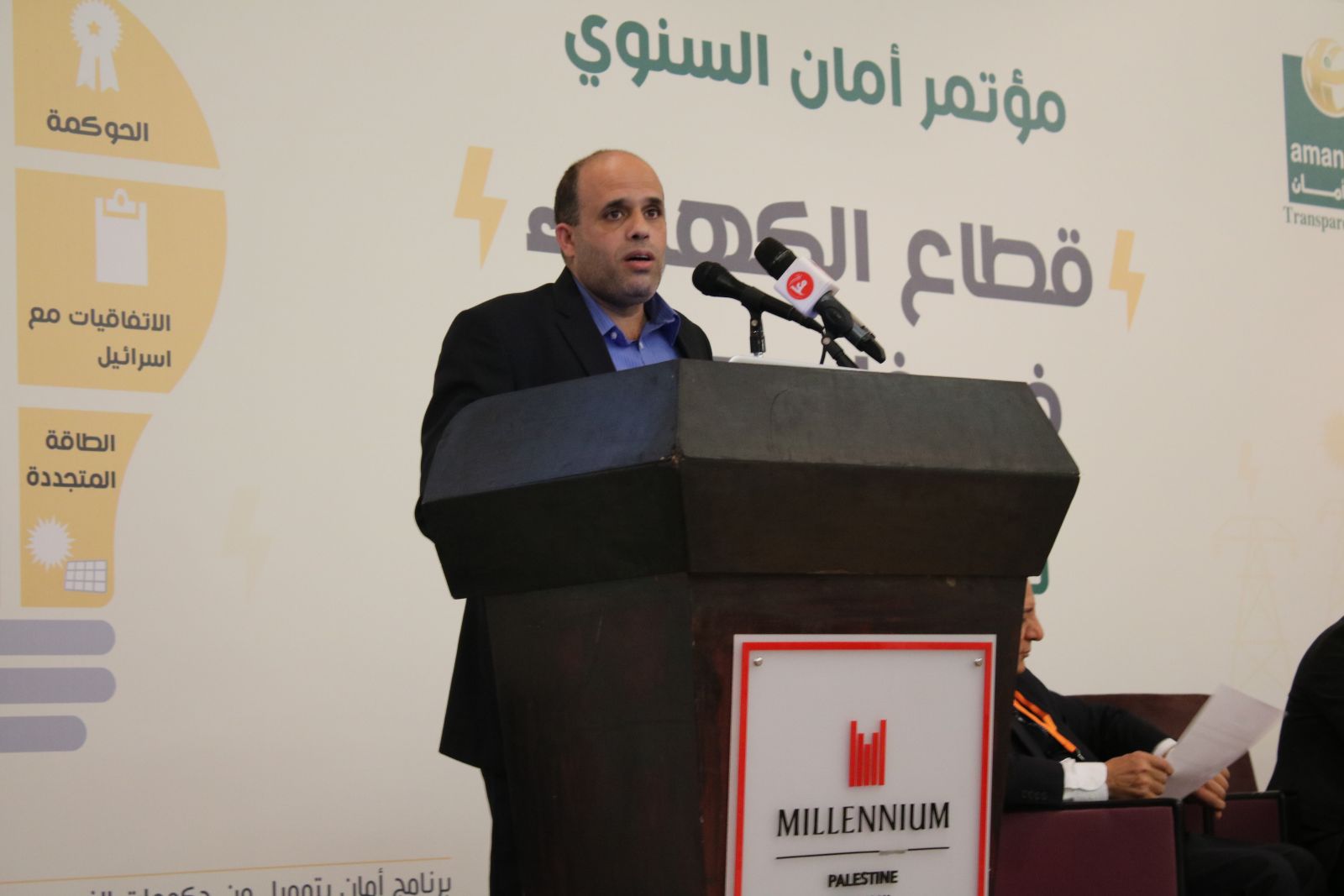 Researcher Moen Barghouthi, presented the issue of the monitoring body over the electricity sector, to examine and review the Palestinian experience in establishing and activation the role of the monitoring body and to verify the existence of a legal and institutional governance environment to help facilitate exercising its responsibilities, especially in the electricity’s quality, prices, and filling the citizen’s needs.
Moreover, Mr. Barghouthi also pointed out many obstacles which prevent the Regulatory Body in performing its duties, most important of which is the lack of a separate administrative system for the council, as well as the absence of an established structure to the council, and not enough employees to perform the tasks and duties of the council. 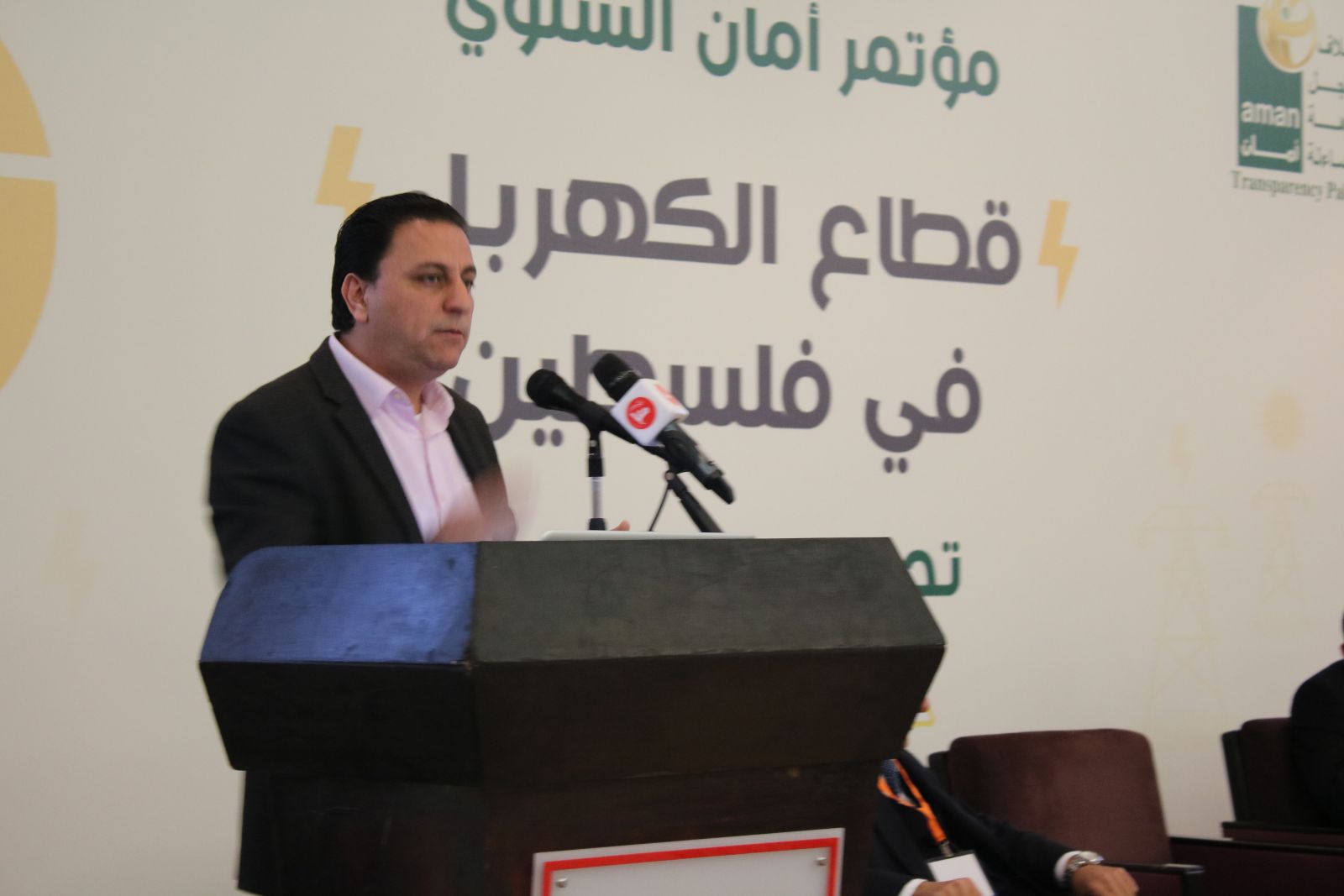 Mr. Moayad Afaneh presented the most important points regarding Net Lending and its effects on the Palestinian Budget, indicating that the value of Net Lending constitutes of the amounts deducted from the clearing revenues by Israel to settle debts owed to Israeli Electricity Companies, Water and Sanitation services to municipalities, Palestinian distribution companies and other items, have reached 15.6 Billion NIS in the years 2003-2016, 80% of which is for Electricity, whereas the net Lendingfor the year 2017 has been rated in 244 Million Dollars, 950 Million NIS, however, the financial indicators state the that value will be much more higher than expected in 2017. 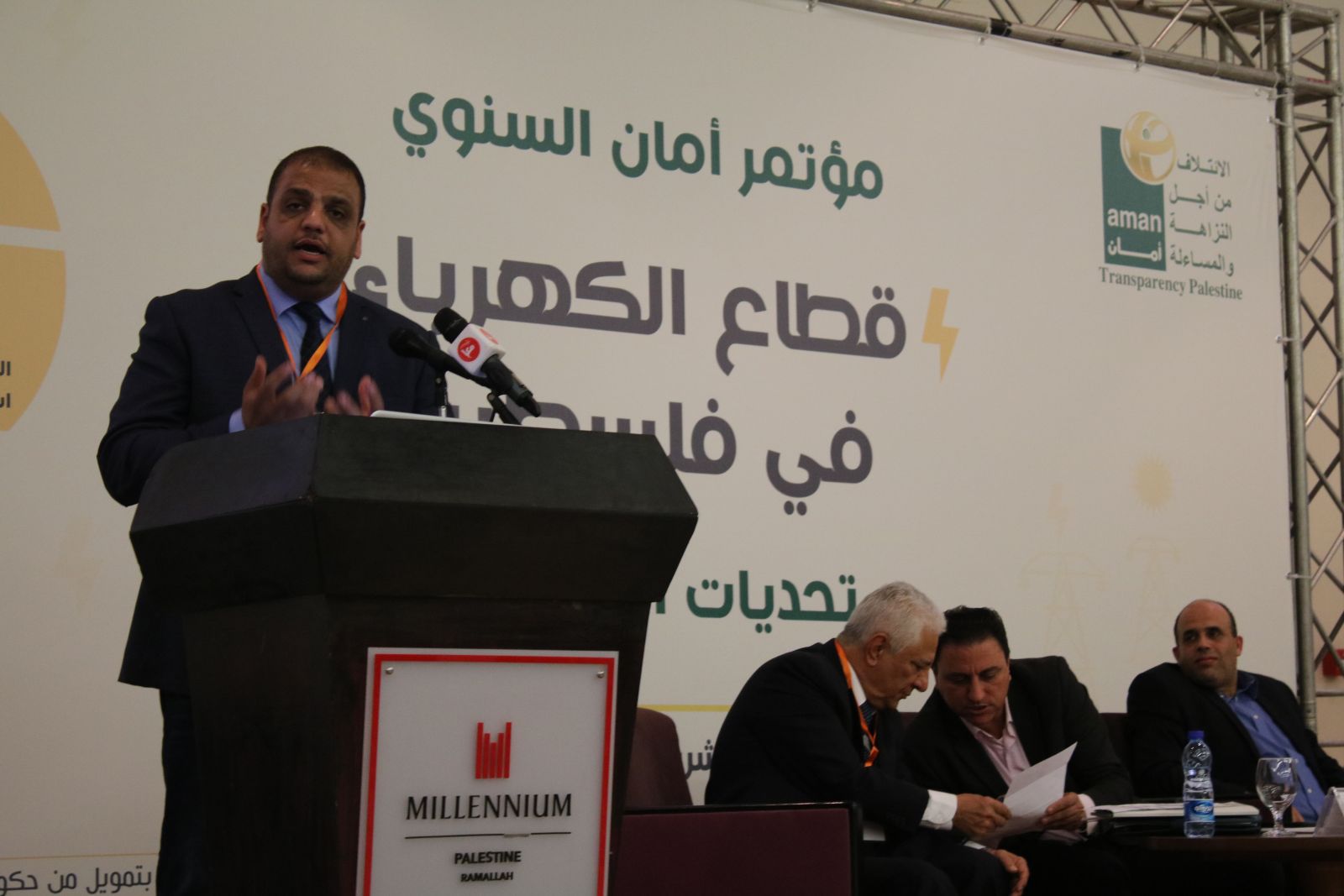 Mr. Salam Al-Zagha, opened a discussion session aimed to study the reality and challenges of the electricity sector, to identify obstacles and developing constructive solutions to ensure the development of the sector and to improve the quality of service provided.

Researcher Dr. Ziad Joelis referred to the specificity of the electricity sector as one of the basic and most important sector providing services needed by the citizen. The number of electricity service consumers have reached about 650,000 in the West Bank and 220,000 in Gaza in 2016. Total points of connection with the Israeli network have reached 250 points, 90 of which relate to the distribution companies in the West Bank, 10 are connected with Gaza, 150 are distributed directly to village councils, municipalities and other communities in the West Bank.Which leads to the inability to adjust the electricity tariff and determine the mechanism of payment of receivables to the supply and the reflected on the net Lending  and the public treasury, especially since electricity is a special case since the Palestinian government relies on the occupation in providing electricity to 88% of the areas, whereas, the annual electricity bill amounts to approximately 700 million dollars annually. Moreover, Dr. Joelis emphasizes that the accumulation of debts from the distribution companies is due to the uncommitted citizens to pay their debts, which affects the quality and stability of the service provided. 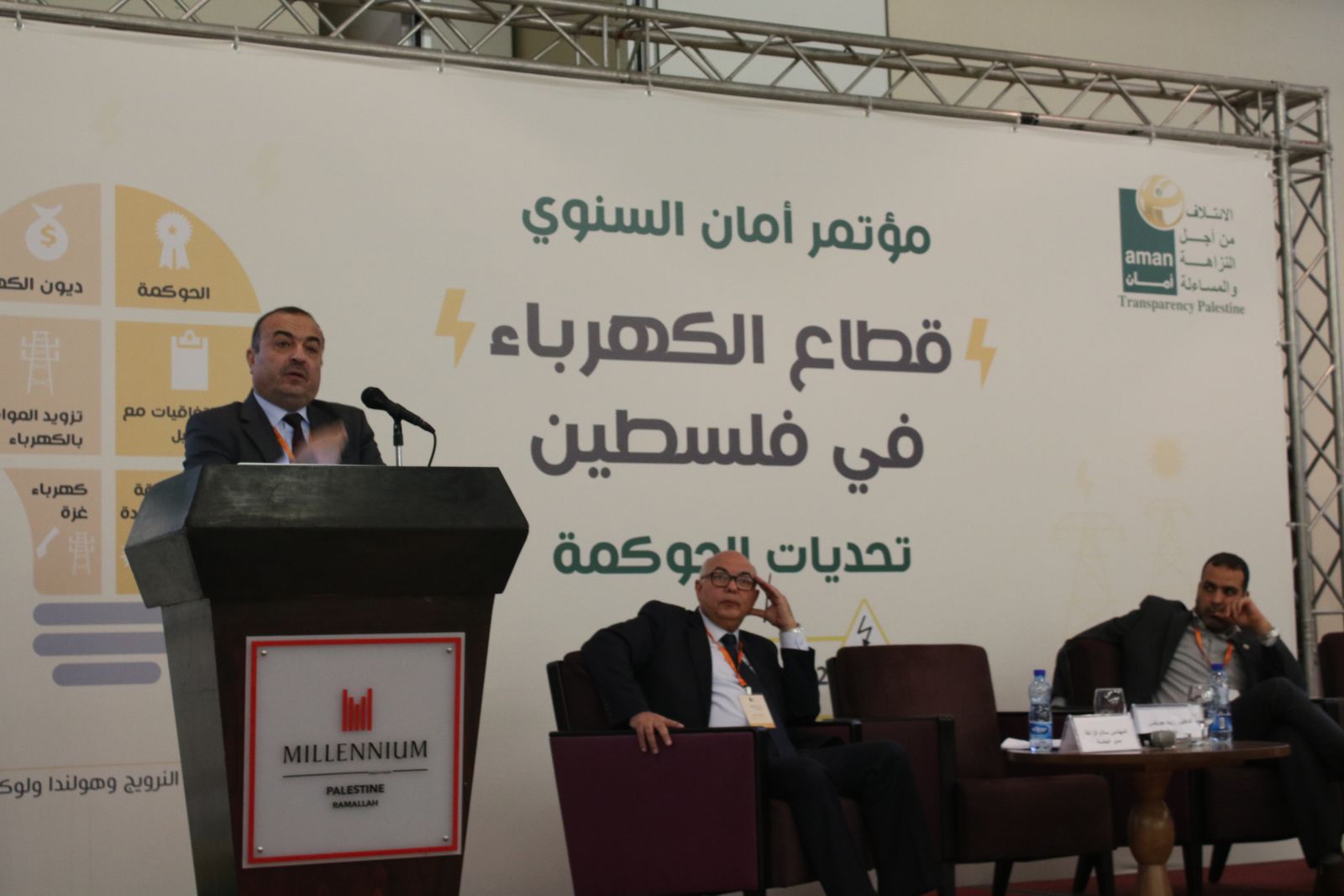 Moreover, Dr. Aysar Yassin presented information regarding renewable energy in Palestine and challenges faced, most prominent of which is the lack of sovereign guarantees by the government to encourage investment in energy production, the instability of the network and the existence of restrictions on renewable energy projects that can be connected with the network and should not exceed 6 Mega Watts in one connection point. Moreover, The Ministry of Finance and Planning does not support the sovereignty of the Fund "to ensure priorities" to cover the risks, in addition to political risks and the problem of land classification, especially in Area "C".

Urgent Need for a Clear Plan to Promote Electricity Sector

The closing session focused on the recommendations concluded related to the issues discussed by the conference, especially those related to the terms of the agreements on electricity with the Israeli side, obstacles regarding the development of the renewable energy sector as well as activating the role of the Palestinian Electricity Regulatory Council and reducing the net Lending item.
Dr. Azmi Shuaibi, Consultant of AMAN’s Board of Directors, emphasized the need for the government to prepare a clear plan limited by a time frame to promote the electricity sector and address all the obstacles faced, in the presence of all relevant government parties to contribute in establishing a Palestinian infrastructure away from the Israeli side establishment of and to stop the stealing from public money under the issue of net Lending.

It is worth mentioning that the AMAN coalition held its conference this year to be specialized in a specific issue monitored by the report "The reality of integrity and the fight against corruption in Palestine" in the presence of specialists from governmental, civil and private sectors, in addition to a number of experts from the electricity sector, who emphasized that the most important step towards the advancement of this sector is in adopting a clear policy by the government to advance the level of service provided and establish a stage of liberation from the Israeli control. 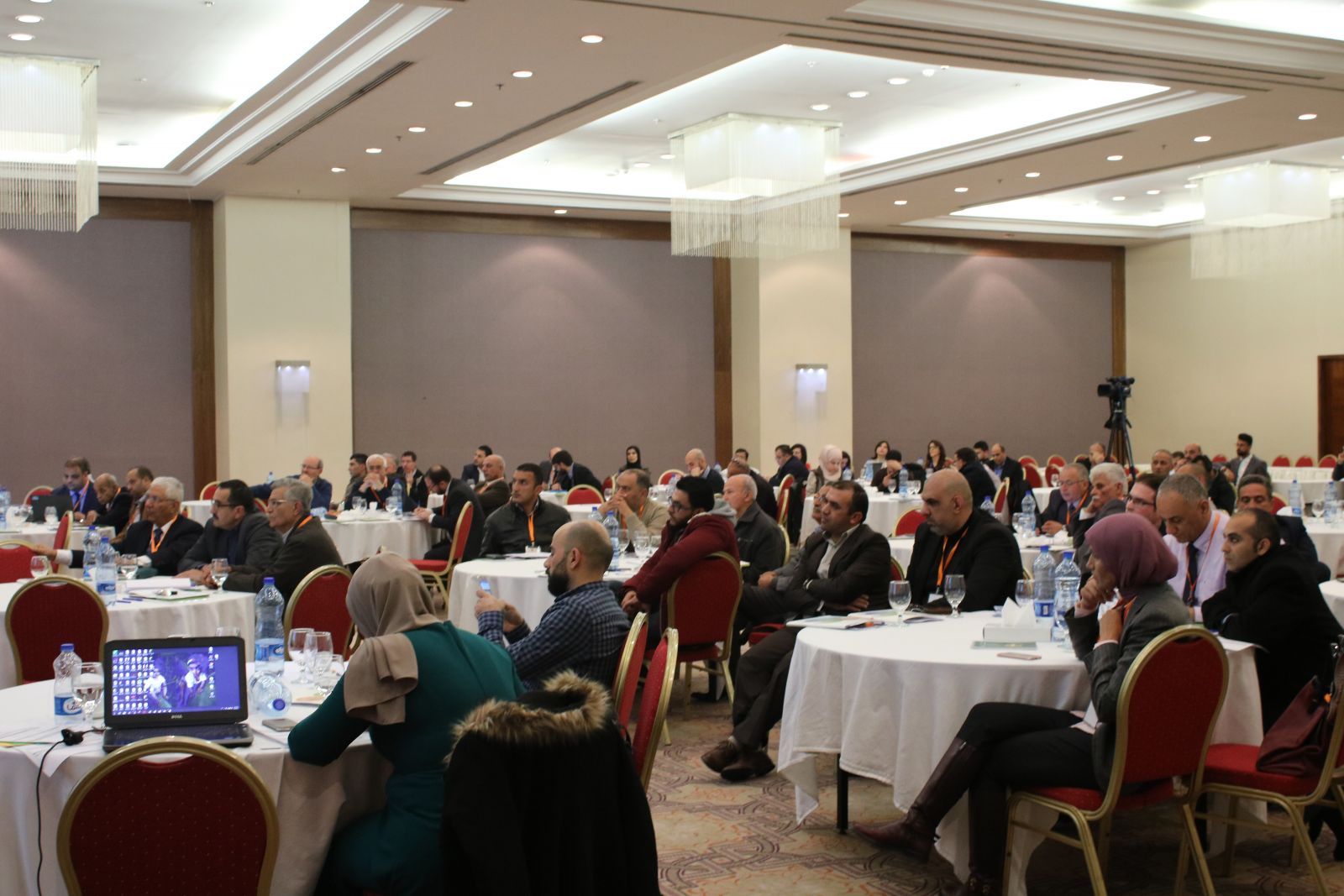