THE PALESTINIAN AUTHORITY SHOULD AMEND LAWS TO PROTECT FREE SPEECH

Transparency International, the global anti-corruption movement, is deeply concerned about the latest escalation in attacks on media freedom and free speech in Palestine and is calling for the Palestinian Authority (PA) to amend the Electronic Crimes Law and suspend the new requirement for journalists to have security certificates to work.
The new law and security requirement are restricting the space for civil society to function. They are silencing voices that are critical of the government.

While the law was adopted under the pretext of fighting online crimes, it is being used to muzzle critics of the PA on the internet, including activists, journalists and whistleblowers.

Anyone whose online speech is interpreted by the authorities as harmful to “public order”, “national unity” or “social peace” can be fined, put in prison and sentenced to up to 15 years of hard labour.

“This is intimidation and an alarming trend because it has a serious impact on the principles of transparency, the free flow of information and the right of Palestinian citizens to free speech and to access public information,” said Patricia Moreira, Managing Director of Transparency International.

“Palestinians need to be able to hold their government accountable without fear of reprisal. People will be less able to report corruption,” she added.

In a separate move, journalists and directors of media outlets are now being asked to have special security permits to work. This gives the authorities the power to restrict voices they do not like.

Recently the Ministry of Information demanded Reem Al-Omari, a Palestinian journalist and an activist in the field of social accountability, be replaced as manager of the radio station A7la FM because she does not have a security clearance. Given that security clearance for journalists is not a requirement under Palestinian law, Al-Omari has lodged a complaint with Transparency International’s partner in Palestine, the Coalition for Accountability and Integrity (AMAN). 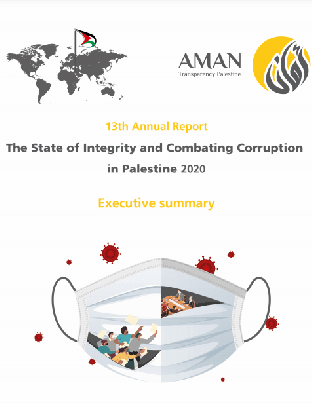