Recommendations to Reconsider the Powers of the Executive Authority in Intervening in Demonstrations, In a Panel Discussion Held by AMAN Over the Impact of Political Corruption on the Right to Regulate Assemblies in the Gaza Strip 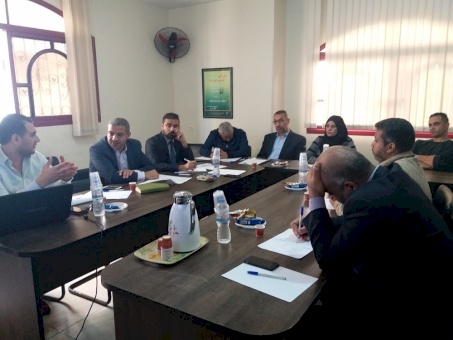 In a panel discussion held by the Coalition for Integrity and Accountability (AMAN) in Gaza over the impact of political corruption on the right to organize a peaceful assembly, and to establish associations, and civil organizations, and the need to review the executive regulations of peaceful assembly law, especially provisions which benefit the Executive Authority, in violently dispersing public demonstrations

as well as emphasizing the importance of activating a political role through expanding political participation and create balance which limit the power of Official Authority stopping the public space.

These recommendations were set out in a panel discussion held by AMAN to discuss a report over the same issue in the participation of many researchers, jurists, and representatives of monitoring organizations, to shed the light over the reality and values of integrity, transparency and accountability to the competent parties responsible for such right, and to regulate, protect, and support such demonstrations based on law.

The Political Situation is the Doom, the Privacy of the Sector must be Taken into Consideration!

Mr. Wael Baloushe, Office Director of AMAN in Gaza, pointed out that this report focuses on the Gaza Strip, similar to another report which is being prepared on the West Bank, where the purpose of the discussion session of the report to take advantage of reviews of the participants to prepare the final draft of the report since this is the policy of AMAN in the preparing reports and studies, based on the principle of participation.

Mr. Mohammad Lafi, Superintendent of the Ministry of the Interior in Gaza, pointed out that the Political parties give orders to security bodies regarding such demonstrations, emphasizing the importance of international regulations over the Gaza strip, because of the occupation, and other unnecessary regulations, which calls for a special interaction to protect demonstrations.

The Need for Demonstration Protection and Guarantee

The report conducted for law, judicial, political guarantees to the right of peaceful demonstrations, in addition to the protection of such demonstrations based on the Basic Palestinian law 1998 setting rules which establish the right to preform and exercise the right of peaceful assembly, in addition to the provisions contained in the executive regulation of the law of public meetings despite the shortcomings recorded by the human rights institutions.

The participants emphasized the importance of a healthy political environment to strengthen the exercise of the right to peaceful assembly, as well as an enabling legal and legislative environment to ensure that it is activated in order to achieve its legal and political objectives.

AMAN has been working on issuing these reports to raise awareness of the right to peaceful assembly. This right has an impact on anti-corruption efforts by defining the forms of this right in the international and regional charters and standards and the internal legal system, and defining the legal and legislative guarantees to guarantee the right of assembly and their compatibility. As well as the description and analysis of the practical reality of the exercise of the right to assemble, especially in light of the continuing state of political division, the images and manifestations of the violation of this right, and the evaluation of the environment and values of integrity and transparency principles to ensure these Rights for all without discrimination.