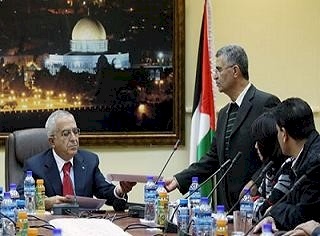 Following a series of interventions and lobbying campaigns prompted by the annual Corruption Report recommendations and a number of literatures urging the need for an official and efficient body to combat corruption, AMAN was able to get a promise of establishing such a commission making it another achievement in promoting integrity, transparency and accountability in the Palestinian society.

Three months later, on 8/3/2010, President Abbas approved the appointment of Rafiq al-Natsheh as a head of the Illicit Gain Commission following a nomination from the Palestinian government.

AMAN went on to introduce an amendment to the Illicit Gain Law in order to expand the commission’s jurisdiction, enhance its role and efficiency and to ensure its capacity to combat all forms of corruption effectively.

To that end, AMAN held a small working session with Head of the Illicit Gain Commission- Rafiq al-Natsheh, Head of the Bar Association, the anti-corruption prosecutor, the Cabinet’s legal department, the General Intelligence, the Arab Lawyers Union, as well as Dr. Azmi al-Shuaibi, AMAN’s General Commissioner and legal consultant for combating corruption

The PNA has already adopted the UNCAC provisions by choice which consequently makes it abiding to the PNA to create an independent anti-corruption commission.

Amendments to the Illicit Gain Commission

Amendments to the law, prepared by AMAN, were discussed in order to conform the Palestinian legislations to the UNCAC as well as to overcome difficulties that may limit the work of the Commission and bound it to the decisions made by the public prosecution, thus, confining the Commission’s ability to investigate corruption crimes and refer them to the Judiciary.

In the same context, the amendments aimed at eliminating some contradictions with other laws and expanding the Commission’s jurisdiction to include various tasks including awareness campaigns that address the Palestinian society on both the official and public levels. The purpose of which is to educate people on the dangers of corruption its impact, the precautionary procedures to be taken and means of combating it. Further steps to be taken are to coordinate with all apparatuses of the State in order to enhance and develop measures, mechanisms and means to combat corruption, to coordinate and cooperate with countries and competent international, regional and Arab organizations, and to participate in international programs that are designed to combat corruption.

What is illicit gain?

Illicit gain is money obtained, for ones self or others, through misuse of office, position or due to a misconduct that violates a legal provision or any manner that is illegal. It can also be identified as the illicit enrichment that reflects on a person, following his assignment, or his spouse, or any of his minors in a manner that does not comply with their sources of income while he fails to prove the legality of this source.

AMAN has already had a commitment from Prime Minister Dr. Salam Fayyad on 5/12/2010 in which he confirmed the importance of combating corruption referring to it as one of the pillars propping up good governance and that his government promises to establish an Illicit Gain. He stated: “we commit to establishing this Commission, and we promise to do so within the shortest possible period and, further, we will activate it in accordance with the Illicit Gain Law.”

This was pursuant to the march organized by AMAN to mark the International Day against Corruption dated on December 9th where hundreds of people from various sectors took part in it.

Tens of representatives on behalf of the march handed PM Salam Fayyad a memorandum demanding the establishment of an Illicit Gain commission pursuant to Article 3 of the Illicit Gain Law no (1) for the year 2005.

Provisions of this law which was issued in Ramallah on January 8 2005, stipulate the establishment of an Illicit Gain commission that has a legal personality, a financial and administrative independency as well as to have a specific budget within the General Budget. The President assigns a head to this commission based on a nomination from the Prime Minister and is then approved by the PLC with an absolute majority.