A Session Held by AMAN: A Demand for Legislating the Right to Knowledge, Access to Justice, Appeal for Justice and Narrowing the Margin of Authority Granted to the Central Tenders Committee 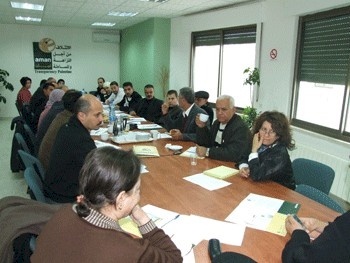 The Coalition for Accountability and Integrity “AMAN” has held a hearing session on the integrity and transparency of the government’s tender bids in the presence of the procurement department at the Ministry of Finance as part of AMAN’s endeavor to follow up on the complaints received by the Advocacy and Legal Aid Center-ALAC. The latter constantly receives complaints from Palestinian citizens and companies regarding the re-inviting for tender bids after opening them and disclosing price offers to competitors which negatively affects the integrity of the competition process.

Mr. Bassam Jaber, Head of the Central Tenders Committee, and Mr. Nasser Al-Khatib in his capacity as the representative of the procurement department at the Ministry of Finance along with other relevant parties (including public organizations, local councils, the Federation of Contractors, a number of private companies and plaintiffs) have attended the session.

The Executive Director of AMAN Ms. Ghada Zugheir ,who opened the session by welcoming the audience, emphasized integrity and transparency in government’s tender bids and that the latter should not be subject to exploitation, favoritism or personal interests. Ms. Zugheir sustained AMAN’S continuous and constant interest in this highly sensitive issue especially after receiving a multitude of related complaints recently. Those complaints proved lack of legislative and practical failures in inviting for and selecting tender bids. AMAN had the honor to contribute in the legislative plan of the cabinet by discussing and promulgating new tender legislation that will hopefully fill the gaps, make-up for the legislative shortcomings and promote the integrity and transparency of the process.

The Palestinian Authority (PA) Has a Genuine Inclination:

AMAN’s General Commissioner for Combating Corruption, Dr. Azmi Shuaibi, commended the PA`s serious and genuine inclination to rectify the current status on the legislative level, in addition to the founding of an establishment specialized for tenders and procurements. Dr. Shuaibi stated that the current legislation has been hastily promulgated and that it has several loopholes that the new legislation will try to avoid. Yet, the biggest challenge is implied in practicing and enforcing the law. Dr. Shuaibi added “The many complaints we have received have drawn our attention to two issues. The first issue is related to when a tender bid is invited according to the law and terms, and sudden things happen and create a state of confusion for the committee that becomes unable to discuss the tenders after opening them. This may be attributed to an error in estimating the real cost of the tender in which case a discrepancy between the demanded and offered prices occurs that may lead in some cases to the cancellation of the tender process.

The second issue is represented by the cancellation of the tender process upon the intervention of external parties that happen to be in most cases the sponsors themselves. In these two cases and after disclosing the offered prices the tender process is cancelled and re-invited without any change in the substance.”

Dr. Shuaibi asked the Head of the Central Tenders Committee, Mr. Bassam Jaber to explain the process of inviting and selecting tenders. He also asked for Mr. Jaber’s remarks and recommendations so that many obstacles can be avoided under the new legislation. The head of Central Tenders Committee sustained that the committee makes sure as a first step that necessary funds are available for a particular tender. Then the tender is studied and a cost estimate is made and forwarded to the decision maker. He added that misestimating may occur because of fluctuation of prices. He also added that if the lowest tender cost happens to be higher than that estimated, the law entitles the committee to cancel tenders that may be re-invited. And if it happens that any party such as the sponsor interferes after opening tenders, the process shall go on according to the law assuming that the other procedures were correct. Mr. Jaber also added:” If there were to be an enormous misestimating of the price the estimate committee would be asked to give another estimate. With this happening, prices are disclosed and bidders raise their prices so that they match the highly estimated price. Mr. Jaber also pointed out to the fact, that most estimates in Palestine were accurate, and high discrepancy between offered and estimate prices occurred in only few cases, and cases of tender cancellation did not exceed 1%.

The representative of the Procurement Department at the Ministry of Finance Mr. Nasser Khatib discussed exceptional cases that usually come from the Prime Minister Office and upon the recommendation of  specialized parties that in turn will shoulder responsibility for that exception. He also mentioned that local products are preferred and have the priority in the tender selection process provided that the latter matches the required standards and according to the law.

The Federation of Contractors:  The Tender Committee’s work Is Not Integrated

The representative of the Federation of Contractors, Mr. Mahmoud Jubeil pointed out to the fact that the tender committee is different than the technical committee and usually there is no cooperation between them.

He added that in some cases the technical committee is not aware of the tender, and that the tender committee does not publish the monthly price bulletin, a task the said committee ought to do in order to help contractors offer adequate prices. Jubeil sustained that re-inviting the tender by the ministry creates a problem even if the law grants it the right to do so.

Plaintiffs – There Is No Transparency

A plaintiff Mohammad Al-Hilou talked about his complaint regarding a tender bid he has offered to the Ramallah municipality as to the installing car parking prepaid meters. He said that upon opening the tenders, his offer happened to be the lowest. He was verbally contacted and told that his offer was selected. To his dismay, he read the tender for the second time in a local newspaper. When asked about the reason, the municipality said that the sponsor who happened to be the World Bank has disputed tender procedures which made the municipality cancel the tender and invite for it again. Another contractor was selected then, and standards were modified for them to be more convenient to the contractor.

The second plaintiff by the name Elias Tannous asked that some issues be taken into account when inviting for tenders. A comparison for the  tenders should be made and the median market price should be used as a reference. He also demanded that a written letter should be sent to the contractor in case a tender is cancelled. This will entitle a contractor to demand a compensation regardless of the law. Mr. Tannous sustained that the tender process should be open to all contractors

The participants came up with the following.

There should be a good valid reason for re-inviting for a tender bid even if the law entitles the committee to do so. A new law should impose more constraints on re-inviting a tender and make investors avoid various problems.
Contractors should be informed about the cancellation of tender by a written letter, even though the law does not stipulate that. That citizen’s right for information guarantees him the right for knowing the reasons behind cancelling a tender bid. A citizen is also entitled to access to justice, and appeal for justice
A monitoring committee to be formed in order to investigate exceptions recommended by the prime minister’s office.
The tenders committee ought to re-estimate prices if the latter happen to be far from those of the market. The role f the sponsor regarding bids should be limited.
A tender should not be cancelled after the selection process is consummated especially after adopting the right procedures.
The ministry of public works ought to issue a monthly price bulletin which will help contractors offer reasonable price tenders. This will also entitle the committee to accept or reject tenders vis-â-vis the prices shown in the bulletin. Not issuing this bulletin is considered a negligence rather than lack of transparency.
The participants asked for narrowing the price margin, otherwise inequality on the part of the estimate authorities may take place. And a citizen has the right to know the limitations imposed.