In order to raise the awareness of younger generations on anti-corruption issues Seven Palestinian universities adopt the integrity, transparency and accountability course in Palestine 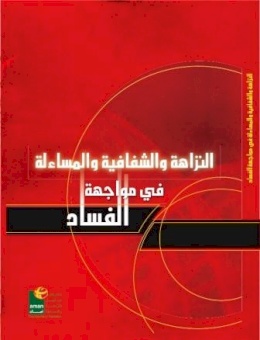 AMAN raised a pilot university course entitled "integrity, transparency and accountability in the face of corruption" which has been adopted for teaching at Birzeit University since the beginning of 2007 until now. In 2009, the Islamic University in Gaza also adopted the course in its academic plan 2009-2010. This led to a successful experience in raising awareness of the younger generations of anti-corruption issues.

And in order to disseminate this experience to other universities and not restricting it to two universities, AMAN set out a campaign to different universities in the West Bank and Gaza Strip as to adopt the course in their future academics plans and to encourage them to participate effectively in the national efforts in fighting corruption. And that relies on our faith of the importance of the major role that education plays in raising awareness and building an anti-corruption cultural community.

Different assessments were made by Birzeit University and AMAN institution confirmed that a broad registration and a wide positive reaction appeared among the university students to join the course. As the number of students enrolled for the course increased by 12% since 2007. What reinforces this level of consciousness among the students to fight corruption is their intension to discuss one of the corruption topics in the Palestinian society and how to confront it in their graduation thesis, considering AMAN institution as their reference in this field. Whereas AMAN had supervised several research and undergraduate projects and masters thesis.

Adoption of the course by new universities

This course will be raised and taught to start by the beginning of the next semester in 2010-2011.

The  Aim is to raise awareness against corruption
This course aims to explain the conceptual framework relating to corruption of the young Palestinian generation and to provide them with a full comprehensive view of the reality of corruption and its manifestations, causes and effects on Palestinian society, as well as providing analysis of the legislative system, policy and institutional related, and it is also interested in the ways of counteraction and that is by strengthening the system of transparency, accountability and integrity,  In recognition from AMAN that the Palestinian educational system is capable of confronting corruption through building an anti-corruption general culture.


We seek to raise awareness of younger generations through this course considering them as the future leaders and stimulate their sense of national belonging and awareness of corruption and its dangers further more, we seek in providing them with the values of integrity and principles of transparency and accountability systems.  And we emphasize that the future of the Palestinian state must be based on the rule of law and independent judicial system and good governance.


In other words, such a course works on motivating young people to participate effectively in the preventive and corrective activities against corruption to create a promising future for them, a future free of corruption and full of hope.


and it is worth to mention that this project that aims to develop the course and circulate it to the rest of the universities is financed by the National Endowment for Democracy NED.