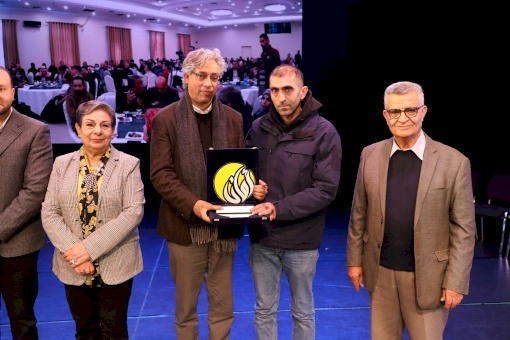 Ramallah and Gaza – Under the theme United against Corruption, the Coalition for Accountability and Integrity (AMAN) organised its 16th National Integrity Festival in the context of celebrating the International Anti-Corruption Day, which falls on 9 December of every year. Held simultaneously in the cities of Ramallah and Gaza, the festival honoured the champions of integrity for 2021. Rather than abandoning their values, these champions lent a favourable hand to and actively engaged in fighting corruption and exposing corrupt individuals. Champions of integrity developed investigative reports that laid bare instances of corruption and produced focused research on the reality and fight against corruption. They also launched initiatives to promote integrity and fight corruption in the public sector and local government units (LGUs).

Al Husseni: Approving a law on the right of access to information is a priority following the State of Palestine’s accession to the Convention against Corruption

In his opening statement, Mr. Abed Al Qader Al Husseni, Chairman of AMAN Board of Directors, highlighted obligations of the State of Palestine following accession to the United Nations Convention against Corruption. First and foremost, a law on the right of access to information should be approved. In addition to greater transparency and openness, access to public information will be provided to enable citizens to exercise their right to accountability and control over public administration and public financial management.

Al Husseni stressed the importance of holding local elections as a tool of community accountability. To be completed in the remaining local government units across the West Bank, the Gaza-based de facto authority should allow local elections to be held in the Gaza Strip as well. Al Husseni added that legislative and presidential elections need to be organised. A national and community dialogue will be launched to bring an end to the internal Palestinian political divide and reverse the degradation of the internal situation, particularly the crisis in the Palestinian political structure. Elections will strengthen the integrity of government and protect the national project. Calling to attention the title of this year’s AMAN conference, Al Husseni said that, for the first time, AMAN addressed the government integrity and fight against political corruption in the Arab region.

Al Husseni attached particular importance to the pillars of government integrity within the Palestinian Authority (PA), including the mechanism for rise to power, practice of governance, and official oversight. Especially after general elections were put off, Palestinian public have been more concerned about continued government slide into a totalitarian and authoritarian political regime. A growing gap in public confidence in the government will have negative consequences on citizens’ willingness to report instances of corruption, undermining their trust in serious accountability of corrupt individuals.

Nominations for the 2021 Integrity Award

In his statement on behalf of the AMAN Integrity Award Jury in the West Bank and Gaza, Dr. Sameer Zaqqout, Jury member, indicated that pervasive corruption has unfortunately ranked as the number one priority, which Palestinian citizens stressed the need for addressing. According to the findings of the AMAN 2021 Citizens Annual Opinion Poll on the Reality of Corruption and Anti-Corruption Efforts in Palestine, corruption was followed by practices of the Israeli occupying authorities, economic issues, and internal Palestinian political divide. This is evidence of the tremendous impact of corruption on citizens’ lives, particularly in relation to Palestinian resilience in the face of Israeli practices.

Zaqqout announced that AMAN had received 32 applications for the three categories of the Award of Integrity and Fight against Corruption. These included nine applications for public sector and LGU staff, 10 for the best research paper, and 13 for the best investigative report. Zaqqout indicated that the National Integrity Festival would culminate in a distinctive award. Specialised and technical Award committees have made a sustained effort to examine nominations based on predefined and annually upgraded standards and weights. These committees submitted relevant recommendations to the AMAN Management and Jury, which bring together national, juridical and professional persons, for deliberation and decision making.

Champions of Jerusalem: People of the capital

Believing that the first and foremost obstacle to fighting corruption is created by the Israeli occupying authorities, AMAN honoured the people of Jerusalem, particularly the committees of the Sheikh Jarrah and Silwan neighbourhoods. Located in the heart of occupied Jerusalem, both Palestinian quarters under the threat of Judaisation and ethnic cleansing. The award was received by Mr. Fakhri Abu Diyab and Mr. Karmel al-Qasem, the neighbourhood representatives. In paying tribute to Jerusalemites, AMAN asserted the fact that the occupation and corruption are two sides of the same coin. Occupation is the most notorious form of corruption. The struggle waged by the people of the capital is hailed as an example. Jerusalemites have managed to break international silence, touch the hearts of free people around the world, and thwart Israeli schemes in spite of oppression.

For the category of public sector and LGU staff, the Award of Integrity and Fight against Corruption was equally shared between Major Hani Abu Ghanem and Captain Yousef Abu al-Rub, Judicial Police officers in the Jenin governorate. Both detected writs of replevin, which had been falsified by a civil servant at a civil enforcement department. Consequently, the implicated employee was suspended. Based on an official receipt, a single signature of the Enforcement Officer was adopted by the Jenin civil enforcement department. Arrest warrants and writs of replevin were also automated by a special computer program, further promoting preventive measures against corruption at civil enforcement departments throughout Palestinian courts.

Journalist Asma’ Hureish won the Award of Integrity and Fight against Corruption for the best investigative report in 2021. In her report, Ministry of Education Schools Run by the Israeli Jerusalem Municipality: The Goose that Lays the Golden Eggs, Hureish investigated corruption nourished by the Israeli occupying authorities. The report shows that the Israeli Ministry of Education (MoE) operates schools in Kafr Aqab through contractors with the aim of creating problems between operators and teachers, furnishing an opportunity for contractors to serve as guardians who report to the MoE. Under the pretext of corruption and accumulation of debt, these guardians manage schools and pave the way to eliminating Palestinian curriculum and replacing it by an Israeli module. To the disadvantage of Jerusalemites, Israeli systematic policies are aimed at imposing deliberate ignorance on Palestinian children and depopulating the city of Jerusalem of Palestinian residents. In this context, the Israeli occupying authorities evade their responsibilities for controlling and monitoring the performance of school contractors. In addition to allowing impunity, Israel turns a blind eye to any financial and administrative infractions as well as practices of corruption. Instead of punishing violators, the Israeli occupying authorities have closed down a school and deprived 4,000 children of the right to education, forcing parents to enrol their children in several schools.

Journalist Al-Tawil won the Award of Integrity and Fight against Corruption for the best investigative report in 2021. Entitled Illicit Collections from Palestinians’ Pockets, Al-Tawil’s report shed light on fees charged by the Palestinian Bar Association (PBA) without a legal basis. Amounting to NIS 40 million a year, these charges are paid by Palestinian citizens to the PBA in consideration of any transactions that fall under the rubric of notarial deeds, including all types of powers of attorney, declarations, guarantees, registration of companies, mortgages, lease contracts, etc. Based on a PBA bylaw, fee payment was facilitated by successive boards of the High Judicial Council (HJC). For the PBA to easily charge fees, the HJC issued (illegal) circulars requiring PBA approval of transactions.

Immediately after it was published, the report caused a stir, particularly among lawyers. Al-Tawil was threatened by a lawyer, generating strong condemnation within the press and legal communities.

The Award of integrity and Fight against Corruption for the best research paper in the category of higher education was given to researcher Tareq Zumlot. In his research, The Impact of the Public Budget Efficiency on Reducing Financial Corruption in Palestine, Zumlot concluded that the PA public budget deficit unveiled a poor and inefficient fiscal policy structure. This needs to be effectively addressed in order to eliminate misuse of public funds. Effective control mechanisms should be implemented to ensure optimal use of available resources.

On the other hand, the award for the category of bachelor degree research was withheld as no papers fulfilled eligibility requirement for the award.

In conclusion of the 16th National Integrity Festival, participants commended the bravery of whistleblowers and thanked the Integrity Award technical committees. The festival ended with the hope that an encounter would be held next year when COVID-19 will have passed. The pandemic has constrained our lives and deprived us of our loved ones. Participant expressed a renewed faith in new champions, who will hold high the banner of integrity, guard public finances, and establish the values of integrity in the public administration sector.

A large audience took part in AMAN’s National Integrity Festival from both the West Bank and the Gaza Strip. Both personal and virtual attendance included representatives of government bodies, civil society organisations, AMAN’s local and international friends engaged in the anti-corruption effort, and donors. The festival also brought together university students, researchers, media representatives, and academics.