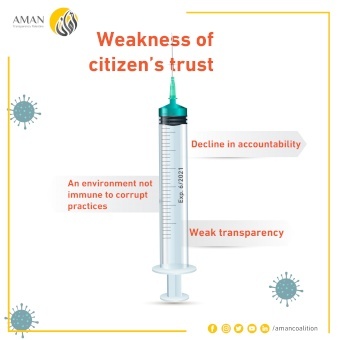 The vaccine exchange with the Israeli occupying authorities has demonstrated, once again, poor transparency in public administration in general, and COVID-19 pandemic management in particular. It makes little sense that the primary source of information on an issue as important as Palestinian citizens’ health be provided by the Israeli occupying power. To promote the principle of transparency, the Palestinian government, represented by the Ministry of Health, had a responsibility to make public the details of the deal before it had been concluded.

The Coalition for Accountability and Integrity (AMAN) has stressed the need to strengthen transparency during the state of emergency. Transparency is a key tool to immunise the procurement and distribution of vaccines against any irregularities or exploitation. All contracts and deals between the government and suppliers, particularly vaccine providers, should be published in detail. This goal is still undermined by poor dissemination of information.

AMAN also emphasises the need for making publicly available the measures to be taken against any official, who neglected to check the validity of the deal. Over and over again, we have experienced Israel’s ill intentions towards the Palestinian people. Measures will make sure that the supervision team examined with due diligence the validity and expiry date of the vaccines in Israeli storehouses. Public information published earlier by the Israeli occupying authorities confirmed that vaccines would expire this June.

AMAN also holds responsible the Pfizer company, the mediator of this exchange, for this breach. In a press conference held yesterday evening, 18 June 2021, the Minister of Health indicated that Pfizer had, and monitored, the serial numbers of all the doses it exported. Hence, Pfizer is also aware that Israeli vaccines were about to expire. Why, then, did it recommend to strike this deal, while at the same it is required to take due diligence to guarantee the safety of the vaccines. The Israeli occupying authorities bear the greatest responsibility. Israel had refused to offer vaccines to Palestinians at the height of the crisis when the pandemic was widespread. Now, Israel approves this deal when vaccines are  too close to expiring in exchange for new doses, which the Pfizer company will export to Palestinians in September 2021.

AMAN expresses its concern at the impact of the vaccine deal on citizens’ trust in the vaccination management process as well as on public high vaccine uptake. Against this background, AMAN calls on official bodies to establish an independent commission of inquiry, including civil society representatives, to look into the details of this deal. AMAN also reiterates its demand for making publicly available all information on public administration and management of public finances, particularly the provision and distribution of COVID-19 vaccines.