Titled Governance of the Telecommunications Sector in Palestine

Ramallah and Gaza – In view of important and vital services provided by the telecom sector to Palestinian citizens, telecom sector governance was the theme of the 2019 Annual Conference of the Coalition for Accountability and Integrity (AMAN). The first session of the conference reviewed the Palestinian government policy for management and regulation of the telecom sector. The second session included an in-depth discussion of the current context of telecom service provision in Palestine, placing a particular focus on the environment of integrity, transparency, and accountability in function of the telecom sector management institutions. A transparent, integral and informed regulation is needed to improve the quality, and affordable prices, of telecom services delivered to the public.

In the vast bulk of its agenda, the AMAN conference recommended that an independent telecom regulatory commission (TRC) be established. The TRC will implement a clearly defined policy set by the Palestinian government and Ministry of Telecommunications and Information Technology (MoTIT), ensuring control and complete separation between service delivery functions. Telecom regulations will be amended, prescribing deterrent penalties, laying out irregularities, and binding telecom companies to a public disclosure policy. The government will ensure fair competition between telecom service providers and put in place mechanisms for control, accountability and auditing of telecom companies.

In conjunction with a workshop on the same theme in the Gaza Strip, the AMAN conference brought together a significant audience, including citizens, former ministers, representatives of line ministries, and ICT experts and specialists in different sectors, including media outlets, research centres, private sector, public shareholding companies, and relevant social partners. In their participation, discussants expressed their positions and views of how to regulate and govern this strategic sector in the face of current challenges and their impact on Palestinian consumers. On its Facebook page, AMAN conducted an opinion poll, inquiring about Palestinian citizens’ satisfaction with the prices of telecom services. The opinion poll results showed that, compared to just 17 percent, as many as 83 percent of the respondents were not satisfied with the prices of telecom services.

In his statement, Mr. Abed Al Qader Al Husseni, Chairman of AMAN’s Board of Director, made reference to the National Policy Agenda (NPA) 2017-2022. Addressing Government Reform, Pillar 2 of the NPA places a particular emphasis on reinforcing perseverance of the Palestinian citizens and maintaining a citizen-centred and responsive government. Effective government will work towards improving services to citizens, strengthening accountability and transparency, and ensuring effective, efficient public financial management. Al Husseni asserted that the government is responsible for effective control over basic service provision. The government is never relieved of meeting its responsibilities. In the context of services provided by the private sector, the government will focus on quality assurance and best value for money.

Al Husseni attributed the poor quality of telecom services to inadequately transparent agreements made between the government and service providers. As at the time of reporting, signed agreements and annexes have not been made publicly available, resulting in an effectively limited access to information on the government’s public financial management. Inaccessible information also restricts the ability to hold to account either party for quality service provision, how suitable the cost is with the comparable level of service delivery, and full coverage of telecom services. According to Al Husseni, one of the reasons accounting for poor performance lies in the lack of a strong and independent control body that regulates telecom service provision in Palestine. AMAN has already made frequent recommendations to this effect.

It is time to establish an independent TRC

Dr. Mashhour Abu Daqqah, former Minister of Telecommunications and Information Technology, presented on the government policies, management, and supervision of telecom services in Palestine, highlighting some key milestones in, and major challenges to, the Palestinian telecom sector. Although a relevant law by decree was promulgated in 2009, a Palestinian TRC has not so far been established. As a result, the government, mainly through the MoTIT, controls, supervises and monitors companies that provide telecom services to citizens. In a reality that cannot be hidden, the Israeli occupation is the main obstacle to regulating and managing the telecom sector in Palestine. The Israeli occupying authorities seize control of the entire Palestinian electromagnetic spectrum. The Palestinian economy is also crippled by legal and regulatory challenges, which inhibit the granting of concessions to investors. Antimonopoly measures are ineffective in view of inadequate laws, which are needed to regulate concessions and prevent monopoly.

Abu Daqqah concluded his presentation with several recommendations. Laws regulating the telecom sector need to be amended, allowing the government and MoTIT to catch up with the rapid growth in the telecom sector. Penalties and fines will be prescribed against telecom companies that breach relevant licence conditions. Service providers will abide by a public disclosure policy. Mechanisms for control, accountability and auditing will be applicable to telecom companies. The Palestine Telecommunications Company (Paltel), Palestine Cellular Communications Company (Jawwal) and Hadara Internet Services will be completely separate from one another. A financially and economically independent commission will be set up to implement a clearly defined policy established by the MoTIT and government. In addition to furnishing opportunities to new operators, a fair competition policy will be in place to promote investment in the telecom sector and reduce prices. Inclusive services will be delivered to all regions, including cities, villages, refugee camps, as well as advantaged and disadvantaged areas.

Telecom services in Gaza are under siege too

In the Gaza Strip, a seminar was held in conjunction with the AMAN conference in the West Bank. In the Gaza seminar, participants stressed the need to analyse investment revenues and contribution of profits of the telecom sector to the local economy. Internet service models will be advanced beyond bit stream access (BSA), which has so far failed to improve internet service provision. Pressure will be placed on the donor community and  International Telecommunication Union (ITU) to introduce 4G in the Gaza Strip and West Bank. To regulate the broader ICT sector, discussants also highlighted the need for expedited action to establish a TRC with independent and impartial members. They also recommended that the MoTIT and Palestine Standards Institution (PSI) provide more effective control over ICT equipment, ensuring consumer protection and environmental safety. In addition, participants in the Gaza workshop presented a set of recommendations: The Gaza-based MoTIT should not allow Paltel to provide internet services together with the ADSL, which negatively impacts market expansion and undermines the role of internet service providers. A crisis cell needs to be established, including the MoTIT and relevant experts, to address the problems faced by internet companies in Gaza after Paltel monopolised internet service provision. In violation of licence conditions, the MoTIT has allowed Paltel to be in direct control of internet services. 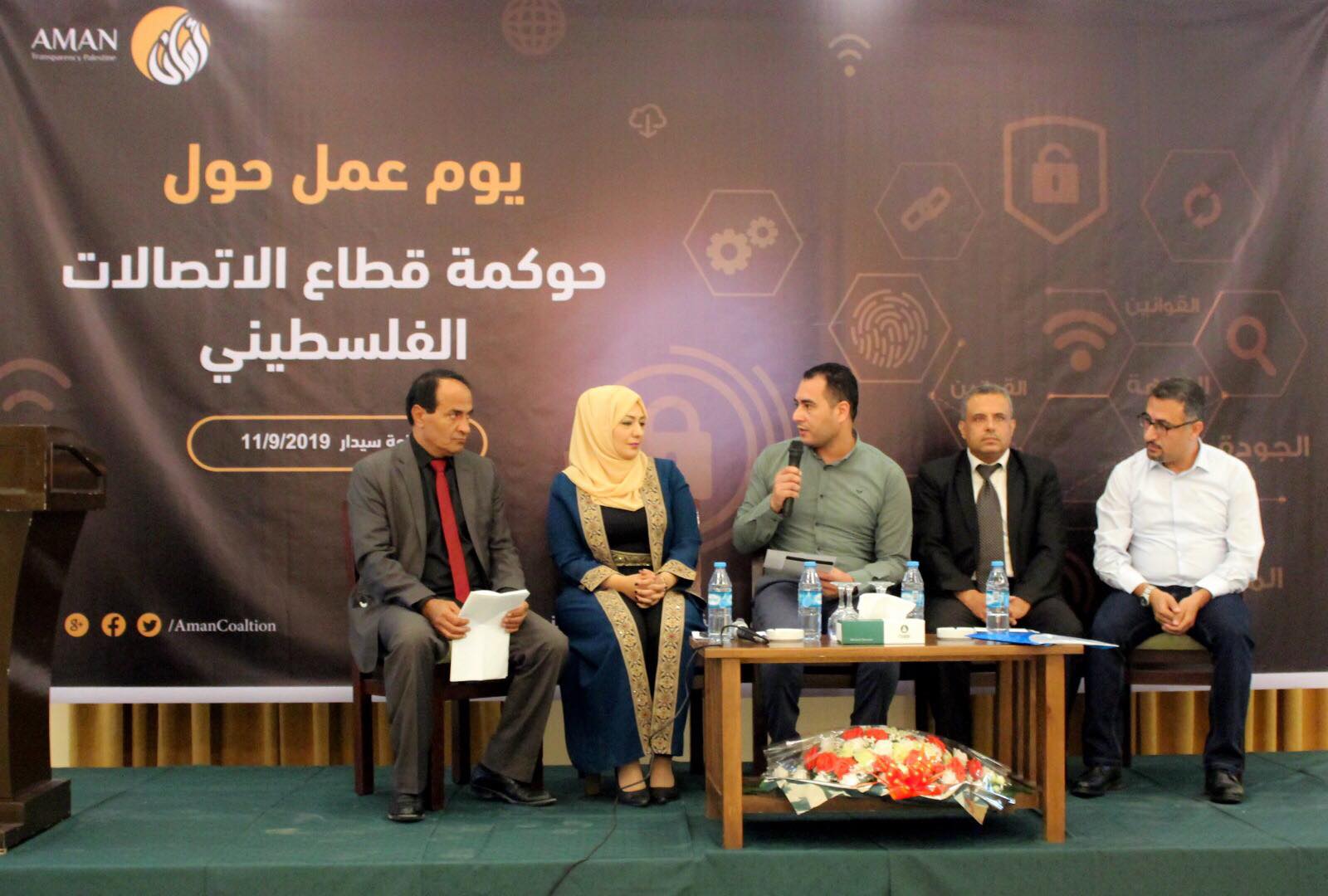 The second session presented main recommendations of the AMAN report on integrity and transparency in functions of telecom companies, namely, Paltel and Ooredoo Palestine. The Palestinian State Audit and Administrative Control Bureau (SAACB) should provide more effective control over the operations of public shareholding companies, which run public facilities. These companies should put in place the Palestinian Corporate Governance Code of Conduct, whereby independent members are elected and appointed on management boards. Both Paltel and Ooredoo Palestine will publish their concession agreements, particularly the financial sections in these agreements. In both companies, management boards will adopt a regulation, providing a detailed and publicly accessible account of conflicts of interests among board members. In their annual reports, Paltel and Ooredoo Palestine will also provide a complete version, outlining the volume of expenses and facilities given to relevant board members. To promote the rules of integrity in the operations of public shareholding companies, annual reports will spell out the number of shares owned by a board member as well as by their spouse and minor children. The second session of the AMAN conference further recommended that the management boards of Paltel and Ooredoo Palestine should publish their approved administrative regulations and salary scales on respective websites. To ensure transparent operations, the number of terms of board chairmanships will be defined.

Government failure to liberate the market from internet provision monopoly

For the first time, the AMAN conference presented an investigative report, titled #hornet-nest. Developed in partnership with the Wattan News Agency, the report unveiled an operable fibre optic network of the Jerusalem District Electricity Company (JDECO). With a total cost of US$ 20 million, the network covers an area of 450 square kilometres. The fibre optic network is distinctively capable of rapid transmission, telecommunications, and reduced internet cost. However, the network is buried and dysfunctional. Its operation is restricted to electronic meter readings. As it has not come up with an adequate answer, the investigative report inquired about an unjustified two-year delay to issue a licence to the Wamda Company by the MoTIT. Commercially known as the Jerusalem Fibre Optic Company, Wamda was incorporated by the Palestine Investment Fund (PIF) in partnership with the JEDCO. As a competitor with Paltel, Wamda would provide fibre network service using the existing fibre network at electricity distribution companies. The report also indicated that shadowy hands were working towards dismantling the fibre optic network project, inquiring about the government failure to liberate the market from the monopoly of internet service provision. Responding with intransigence, influential figures have been silent on exposing persons who prevent access to information on this file. Mr. Ammar Aker, CEO of PalTel Group, expressed reservations on Paltel’s possession of the fibre optic network. According to correspondence between Paltel Group and the Palestinian government, Aker stated that the same licensing fees, namely US$ 300 million, should be equally applicable to any competitive company, which intends to enter the telecom market. Aker also stressed the need to separate accounts from services. Electricity and telecom services should not be combined in terms of fees and revenues.