Recommending to amend some provisions of the law and strengthen procedures 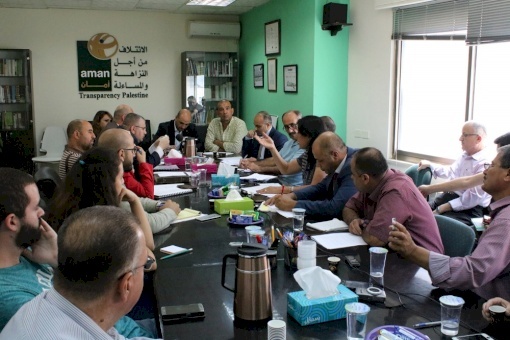 A discussion session on a research paper on eminent domain

The Coalition for Accountability and Integrity (AMAN) discussed a research paper on eminent domain with relevant specialists and experts. Focusing on the integrity and transparency of eminent domain procedures, discussants recommended that the Eminent Domain Law be amended. In line with a modern legislative approach, the law will include a definition of the concept, elements, purposes and objectives of land acquisition and public interest. In consistence with the Basic and supremacy of constitutional norms, the term fair compensation should be introduced in place of the word compensation provided for by the Law on Eminent Domain. A recommendation also stressed the need to amend the Eminent Domain Law with a view to identifying cases of urgent or immediate acquisition. This will be regulated by controls and standards, which promote the values of integrity and transparency. The Council of Ministers’ Decision on Urgent Acquisition needs to be restrained and only applied to the cases provided for by the Eminent Domain Law. Participants also recommended that, following announcement in daily newspapers, a statutory period should be set for the promoter when it submits an application for acquisition to the Council of Ministers. A legal term will also be prescribed for the Council of Ministers to issue a decision on eminent domain and for the Head of the Executive to approve it. In addition to demonstrating seriousness by the promoter, this procedure will ensure stable transactions, maintain the rights of property owners, ward off suspicions of corruption, and consolidate the principles of transparency and integrity. A written and publicly accessible procedure manual on eminent domain (or bylaws of the Eminent Domain Law to be enacted by the Council of Ministers) will be developed. The manual will outline accurate and specific steps of the eminent domain process, including in relation to monitoring, responsibility, and timeframe. Oversight institutions will play a more effective role in control over, and accountability for, decisions on eminent domain.

Rather than legislation, amending enforcement mechanisms of eminent domain is a topmost priority

Representatives of the Palestinian Land Authority (PLA) addressed the question of public interest, which is grounded in the public administration’s will to set the purpose of land allocation. Public administration (namely, the Council of Ministers), rather than the judiciary, is authorised of identifying public interest. The Basic Law entitles the Judicial Authority to assess fair compensation. Affected persons have the right to challenge the decision on eminent domain before the court. According to Article 30, administrative decisions may not be immunised. The PLA is tasked to enforce, not take part in the decision-making process. PLA representatives also discussed the need for modifying eminent domain enforcement mechanisms. This is of greater importance than legislative amendments. The PLA should not interfere with decisions on eminent domain. Its role is limited to enforcing these decisions after they are published in the Official Gazette.

Land must be used for its intended purposes

A number of participants highlighted the importance of effective control over eminent domain decisions. The State Audit and Administrative Control Bureau (SAACB) representative promised that the SAACB would compile a report on this issue. To raise public awareness, the Ministry of Justice representative stressed the need to develop a procedure manual to outline eminent domain procedures.

At the end of the discussion, participants reiterated the recommendations laid out in AMAN’s research paper. A special emphasis was placed on the need to amend provisions of the Eminent Domain Law and prescribe a penalty if the promoter (either the private sector or a local government unit) announces, but later abandons the intention of, eminent domain. Discussants also stressed the need to amend the Eminent Domain Law and exclude companies and juridical persons from those authorities, in the interest of which eminent domain takes place.