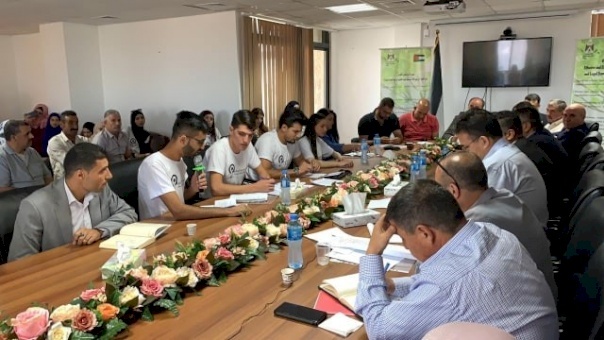 Ramallah and Gaza – “She inquired about her right. He inquired about his right.” A total of 300 young men and women approached community accountability by presiding 30 accountability sessions in 30 areas across the West Bank and Gaza Strip. For the second year in a row, these young men and women joined forces to hold decision-makers to account in issues concerning the agriculture sector. Under the slogan Promoting the Resilience of Farmers, these sessions were held on the occasion of the National Accountability Day. Accountability events were organised by the Coalition for Accountability and Integrity (AMAN) and Sharek Youth Forum in the West Bank and Gaza Strip in collaboration with the Union of Agricultural Work Committees and Future Development Commission.

According to the Oslo Accords, agricultural land under full Israeli control is estimated at 63 percent of the Palestinian territory. Land has long been at the heart of the conflict. For farmers, land is the real capital, which they have persistently defended in the face of the Israeli occupation. However, insignificant financial resources are earmarked to develop the agriculture sector, encourage farmers to persevere on their land, and maintain agricultural activity. Sums allocated to the Ministry of Agriculture (MoA) are less than 1 percent of the general budget. Against this backdrop, it is important to cast light on the agriculture sector and promote a sense of accountability among relevant officials and decision-makers. Policies, claims and recommendations should be adopted with a view to promoting farmers’ resilience, particularly in areas targeted by Israeli practices. Farmers need to be enabled to cope with potential suspicion of corruption in the agriculture sector. Concerted effort is needed to overcome problems caused by natural disasters, Israeli measures, poor planning, inadequate law enforcement, or weak oversight. This pursuit will be tailor made to maintain rights, provide protection to, and enhance the resilience of farmers.

The youth inquired about a number of concerns in the West Bank, first and foremost, implementation of the Agriculture Sector Strategic Plan, progress towards agriculture development, and purposeful delivery of projects, including land reclamation, road construction, and rainwater harvesting. In addition to improving the efficiency of natural resources and irrigation systems, the youth inquired about programmes for enhancing production capacity, such as agricultural services and service provision to male and female farmers and other stakeholders. Particular focus was placed on guidance, veterinary services, and prevention with a view to supporting the resilience of Palestinian farmers on every inch of their land.

80 percent of meat consumption is beyond control

The Minister of Agriculture, Riyadh Atari, announced the MoA plan to cultivate 180,000 trees in Qalqiliya. This will double production in agricultural areas in northern West Bank, create more employment opportunities for graduates, and promote their engagement in productive enterprises. Still, the most serious challenge to the agriculture sector lies in Israel’s control over land and resources. In his response to the youth, Atari called for combating tax evasion, which causes a loss to the public treasury. Consuming products of uncontrolled quality, such as meat, poses a health risk to Palestinian citizens. According to Atari, over 80 percent of meat consumed by Palestinians is beyond control. To monitor meat production, Atari called for increasing the number of slaughterhouses across the Palestinian governances. He also stressed the need to facilitate tax refunds to farmers.

Atari unveiled the deficit in trade balance of agricultural products with Israel, stating that imports were considerably higher than exports. This is attributed to the Paris Economic Protocol and Israeli policies, which prevent Palestinians from importing agricultural products from a third party other than Israel. The Israeli authorities also dump the Palestinian market with imported goods, causing damage and loss to Palestinian products.

During their participation in accountability sessions, some farmers expressed discontent with inadequate technical support and guidance from the MoA. Farmers do not receive technical advice or sensitisation in the field, particularly in relation to agricultural production planning and management. In the context of this accountability exercise, the youth called for creating a mechanism for communication between farmers and the MoA. Regular meetings should be held to review and find solutions for the problems faced by farmers. They also demanded that the MoA play an active oversight role over fluctuating prices of agricultural products, plant nurseries, monopolised imports of insecticides, protection of consumer rights, and environmental conservation.

In other accountability sessions, the youth sounded the alarm when they inquired about control over livestock imports (quota system), challenges to farmers’ compensation from the Palestinian Agricultural Disaster Risk Reduction and Insurance Fund, achievements in land reclamation, and reasons for the delayed payment of tax refunds to farmers. The youth also inquired about challenges to addressing the problems farmers face in the Jordan Valley, interest the Palestinian Employment Fund’s shows in supporting entrepreneurial agriculture projects, implementation of the MoA plan to encourage agricultural education in schools, availability of agricultural majors at Palestinian universities, and activities implemented by the Palestinian Agricultural Credit Institution in support of farmers. Accountability sessions also covered support to resilience and protection of farmers’ right in areas behind the Wall in Jayyus, land settlement, customs and taxes levied on tobacco processing in Ya’bad, price differentials of well water, control over olive oil presses, and criteria for land valuation.

In the Gaza Strip, accountability sessions inquired about control over performance of the General Directorate of Evacuated Agricultural Settlements, impact of overfishing on fisheries in the Gaza sea, price controls on agricultural products, and taxes levied in kind or in cash from fishers. In addition to implementation of the MoA 2019 plan, accountability sessions addressed the role of Consumer Protection Society in monitoring the distribution of irrigation water to farmers, obstacles to complaint handling at the MoA, control over the use of fertilisers and pesticides in Gaza, compensation of farmers (for losses caused by the 2014 offensive on Gaza), and impact of seawater contamination on fisheries and public health.

The youth came up with multiple recommendations. The MoA should publish the annual plan on the livestock sector development in Gaza. The Ministry will disclose tax revenues generated from livestock imports. MoA campaigns and field visits will be intensified to inspect and control agricultural activity on land of the evacuated agricultural settlements. The MoA will develop and publish a quantitative and qualitative annual report on all received, handled and pending complaints.

Accountability sessions were held in keeping with the Sharek and AMAN’s belief that Palestinian society, particularly the youth, need to engage in the anti-corruption effort, oversight of public financial management and public administration, and promotion of community accountability. In addition to raising awareness about their current reality, the youth will acquire needed skills and information to lead a community movement, which is capable of change for better impact. An improved Palestinian context will be in the best interests of Palestinian society from across the spectrum, especially the youth. This is all the more necessary due to inactive Palestinian Legislative Council as well as poor formal accountability and oversight of public administration.

In cooperation and partnership with AMAN, Sharek Youth Forum has offered a series of extensive trainings and encounters to young men and women in both the West Bank and the Gaza Strip. Having participated in the Integrity School, these youths received orientation on the principles of integrity, values of transparency, and systems of community accountability. The accountability exercises helped participants translate theory into practice. In addition to dozens of farmers and activists in the Jordan Valley, representatives of civil society organisations working in the agriculture sector took part in the accountability sessions.

To further promote and improve the agriculture sector, community accountability sessions are ensued by a follow up on the commitments, claims and recommendations undertaken by relevant officials.