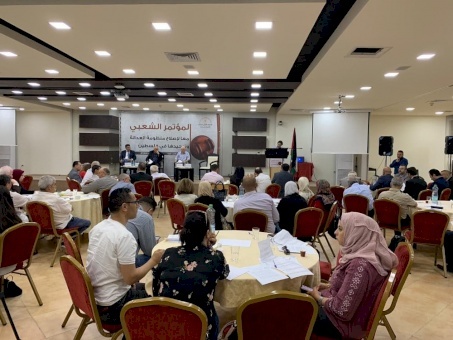 In the conference final statement, participants coincided that a general climate conducive to judicial reform should be created. To achieve a radical reform of the Judicial Authority, national presidential and legislative elections will be held to ensure the creation of an integrated body with legislative competence, particularly in relation to the judicial system. Executive intervention in judicial functions must come to an end. Legal provisions on the appointment to the position of chairman of the High Judicial Council (HJC) and other senior judicial posts will be respected. Judges will stop obstructing attempts to reform the Judicial Authority. Without any misrepresentation, intimidation or backstabbing, the public will be allowed to express their views on judicial functions. Finally, a community-based national committee will be entrusted with the task of following up on and implementing the community vision and conference recommendations for urgent reform and consolidation of the Judicial Authority. In addition to representatives from Gaza, the national committee will include resource persons of high repute from among participants in the conference. It will take account of ongoing community consultations on judicial reform and develop a detailed proposal for rescue, which will be officially announced no later than four week after the conference was held.

In line with its vision, the conference placed a particular focus on promoting public confidence in the Palestinian Judicial Authority. A recent survey of the Palestinian Central Bureau of Statistics (PCBS) showed that 36 percent of the respondents expressed trust in the Palestinian judicial system. According to 2018 Citizens Annual Opinion Poll on the Reality of Corruption and Anti-Corruption Efforts in Palestine of the Coalition for Accountability and Integrity (AMAN), 67 percent of those surveyed in the West Bank perceived corruption within the Judicial Authority, reflecting a significant deterioration and poor public trust in the judiciary. Setting alarm bells ringing, this decline requires a solution to reform and enhance the judicial system so that it restores public confidence.

Independent, integral and impartial judicial system is a popular demand

In his opening remarks, Mr. Abed Al Qader Al Husseni, Chairman of AMAN’s Board of Directors, emphasised that a successful judicial reform and consolidation process depends on a serious political will. These goes hand in hand with a democratic environment, elected Palestinian Legislative Council (PLC), and respect for the principle of separation of powers. The Executive will not manipulate the Judicial Authority under the pretext of reform. The judicial reform process will not be used to settle personal scores within the judicial system and beyond. Guaranteeing protection of judicial independence, the Judicial Authority will restore its genuine role as a body that exercises oversight of functions of other authorities. The judiciary can, therefore, safeguard rights, freedoms, justice and rule of law in society. Al Husseni stressed that judicial functions need to be transparent and clear. Citizens will have the right to access justice, ensuring publicly available court decisions and HJC meeting minutes. In addition to rejuvenating judicial inspection, the civil society should be represented on the HJC.

In his statement, Al Husseni reiterated the popular demand for an independent, integral and impartial judicial apparatus. This is a key component of the state of law and a main guarantee for protection of human rights and fundamental freedoms. Promotion, reform and consolidation of the Palestinian judicial system is a supreme national interest.

Research papers, perceptions and proposals were presented in the conference. The first conference session addressed evolution of the Palestinian judicial system. Dr. George Giacaman highlighted the important role an independent judicial authority plays in building a democratic state. In his presentation, Dr. Camille Mansour provided an overview of the establishment, evolution and challenges to the Judicial Authority in Palestine. Dr. Mansour made clear that a substantial judicial reform can only take place through a pluralistic political system and effective PLC.

The second session of the conference reviewed challenges that faced the Judicial Authority, mainly HJC formation and appointment of the HJC chairman. Justice Abdullah Ghuzlan elaborated extensively on the promotion of integrity, transparency and accountability within the Judicial Authority.

Conference papers had a close look at the HJC structure. The fact that the HJC chairman is nominated to the Head of the Executive is one of the most prominent problems affecting the Judicial Authority. It constitutes wanton interference in, and causes confusion to, judicial functions. This problem is triggered by a weak HJC, which is also preoccupied with quotas and affiliations and impacted by external influences. In addition, the Civil Coalition for the Reform and Protection of the Judiciary stressed the need for a separation of powers between the HJC chairmanship as an administrative positon and presidency of the High Court as a judicial position. This will contribute to accomplishing and promoting judicial reform. In accordance with relevant laws and based on clearly defined and transparent selection criteria, community participation in the HJC will involve experienced and competent members from outside the judicial system. HJC functions will be subject to a stronger accountability system. An improved accountability mechanism will be applicable to the HJC Chairman. An election conducted by the HJC General Assembly will be adopted as a technique to nominate the President of the High Court. In addition to consolidating integrity of HJC operations, HJC committees, departments and units will be established along the lines of objective and transparent controls and criteria. Accordingly, tasks, mandates and working relationships will be identified, particularly in relation to the appointment, promotion and accountability of judges. The system of transparency will also be promoted by publishing the HJC agendas and decisions by available means.

“Castles can only be taken from within”

Discussants expressed concern that community pressure for judicial reform might be exploited by the Executive to divert the course of, and use, the reform process for settling personal scores.

Throughout the conference sessions, repeated calls were made to promote and protect judicial independence. To this end, intervention in judicial functions will be incriminated and punished by a penal sanction. Those who intervene in judicial functions will be dismissed from public office, including all staff members of the executive, judicial and other branches of government. Judges will be obliged to disclose interference with their functions formally and directly to the HJC. Constitutional provisions, which incriminate abstention from enforcing, or stalling the enforcement of, court decisions, will be reinvigorated. Dividing lines will be drawn between justice actors, particularly between the HJC and Ministry of Justice. The legal nature of the Public Prosecution will be delineated as a branch of the Judicial Authority. A mechanism will be devised to hold the Attorney General to account.

The conference also called for establishing a temporary independent national committee for judicial evaluation. To be formed by an elected PLC, membership on the committee will include former judges, lawyers, academics and experts in the judicial field. Serving one term, the committee’s recommendations will be binding and effective following approval. To report to the HJC, a permanent committee for judicial evaluation will also be established, empowered to provide a quality assessment of court decisions, and supported by necessary human resources. Additionally, judicial inspection will be enabled and activated by strengthening independence of judicial inspection officers and precluding any potential conflicts of interest. All employees at the Judicial Authority, including members of the High Court and prosecutors, will be subject to judicial inspection.

The conference brought together hundreds of members of the legal and judicial communities, law professors, academics, law students at Palestinian universities, and representatives of media outlets.